This produced a storm of tweets from bulls like Anthony Pompliano and bears like Peter Schiff took the opportunity to gloat about the cyclical misfortune Bitcoin frequently provides is supporters.

However, the main stand out tweet came from CNBC Crypto Trader host Ran Neuner who boasted:

“I’m a member of multiple Crypto chats/WhatsApp groups (none paid)- Some of these chats have the biggest whales and crypto names in the market… and not a single person has any idea what happened today!”

As previously mentioned, this week’s move had already started playing out when the Moving Average Convergence Divergence (MACD) on the weekly chart crossed bearishly back in August.

The last time this happened after a parabolic run was just before the bear market of 2018 and any person with a substantial position in Bitcoin would have have been aware of this. Newer investors and moonboys probably were not expecting this week’s downside break, but the fact that we’ve seen this setup before leads one to question the motive of Ran’s tweet. 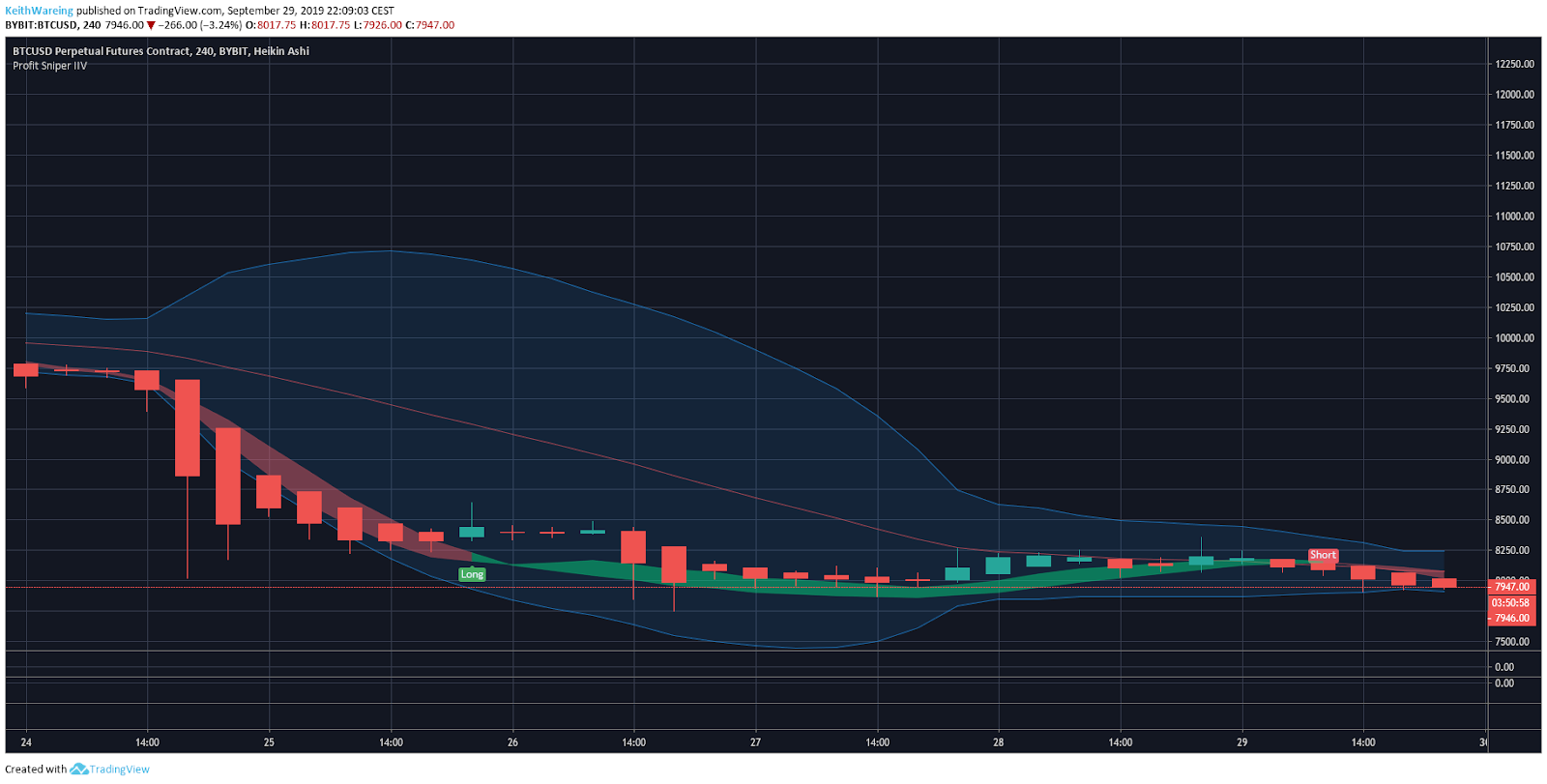 The Bollinger Band indicator shows the upper and lower bands are tightening, which in the past has led the support and resistance range to fall to between $8,300 and $7,900. As the 4-hour close approaches traders can only anxiously wait to see whether it’s an upside or downside break.

It’s worth noting that Bitcoin has broken support nearly every day week however, the last 2 days Bitcoin has been rejected. This final candle could be the bounce the bulls have been waiting for. 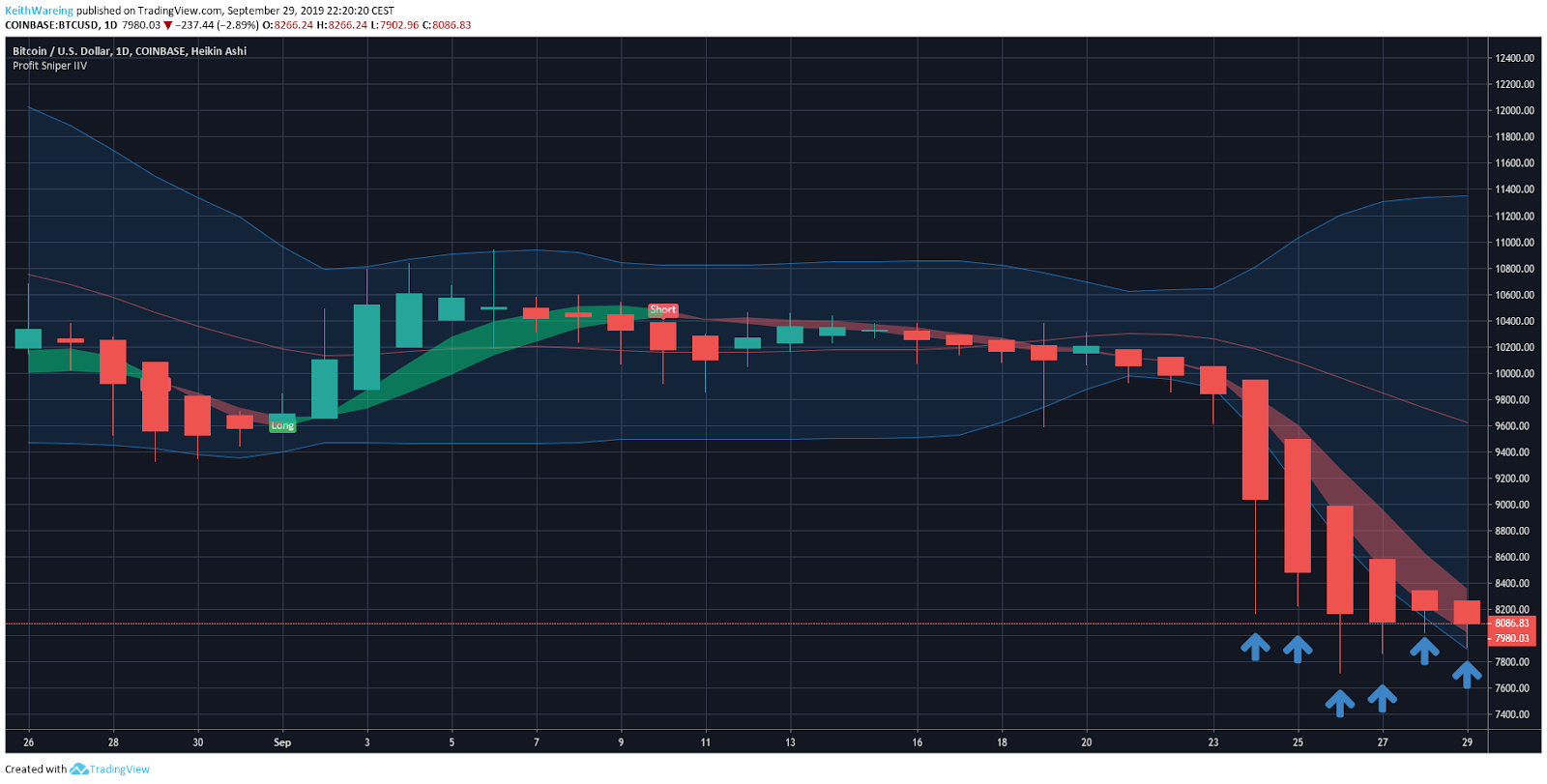 If Bitcoin fails to bounce before the close of the weekly candle, it can be surmised that that the medium-term future will not be good for Bitcoin and you can forget about seeing a new yearly high or an all-time high in 2019.

Using the holy trinity of indicators (Bollinger Bands, Relative Strength Index, Moving Average Convergence Divergence) on the daily chart, one can start to gain a better view of what the week ahead might hold. 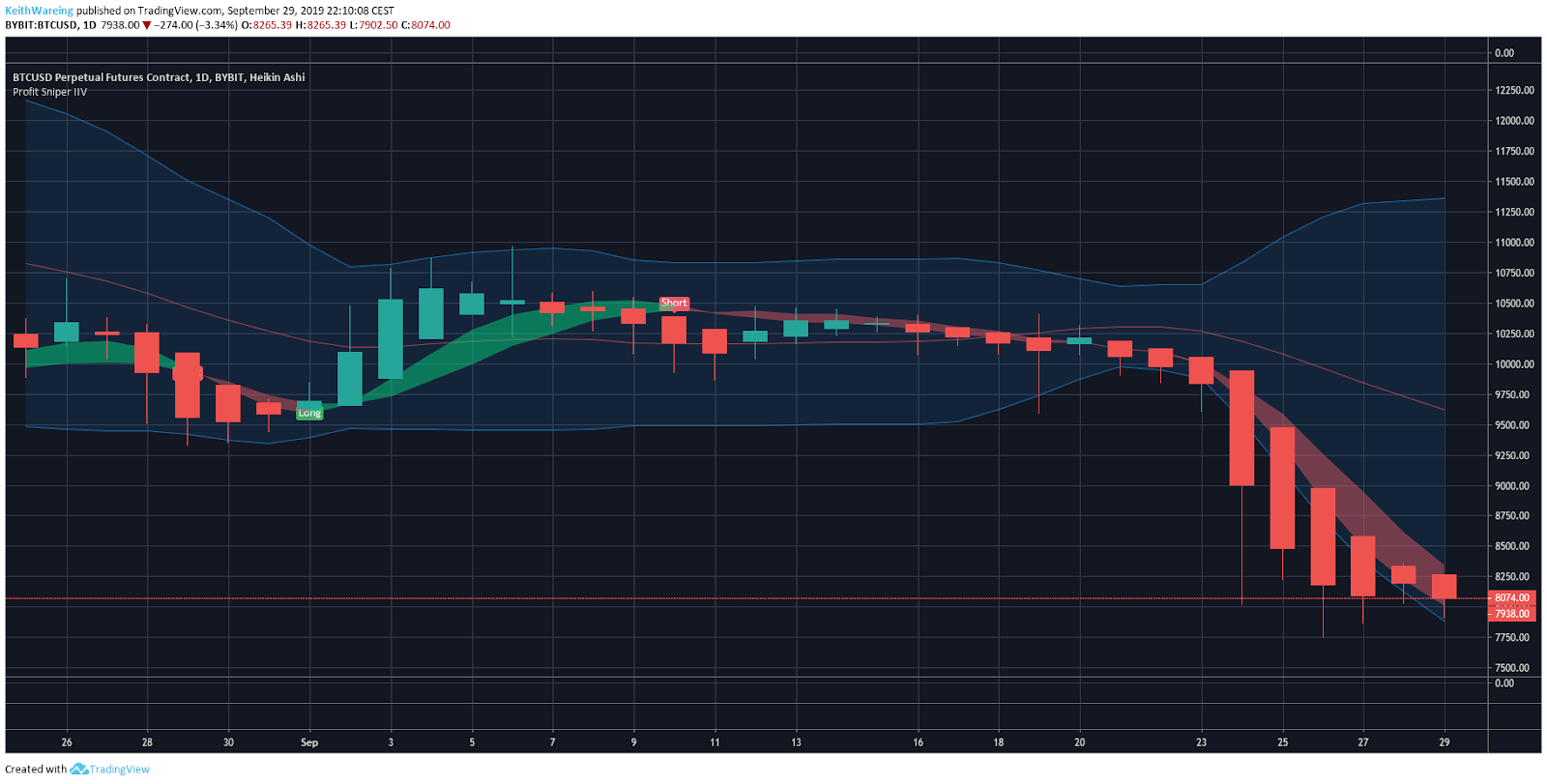 According to the BB on the daily timeframe, Bitcoin is sitting right on the support, which at the time of writing is around $7,953. This means the upside potential here is around $9,590 if the price marches towards the moving average (MA) of the BB indicator and $11,350 if we break past it.

Traders shouldn’t not get too excited just yet as Bitcoin has been breaking the support all week. The support on the weekly is around $7,600 and a move below here could signal that Bitcoin is primed for another bear cycle. The monthly MA is at $7,000 and the support is as low as $2,500. 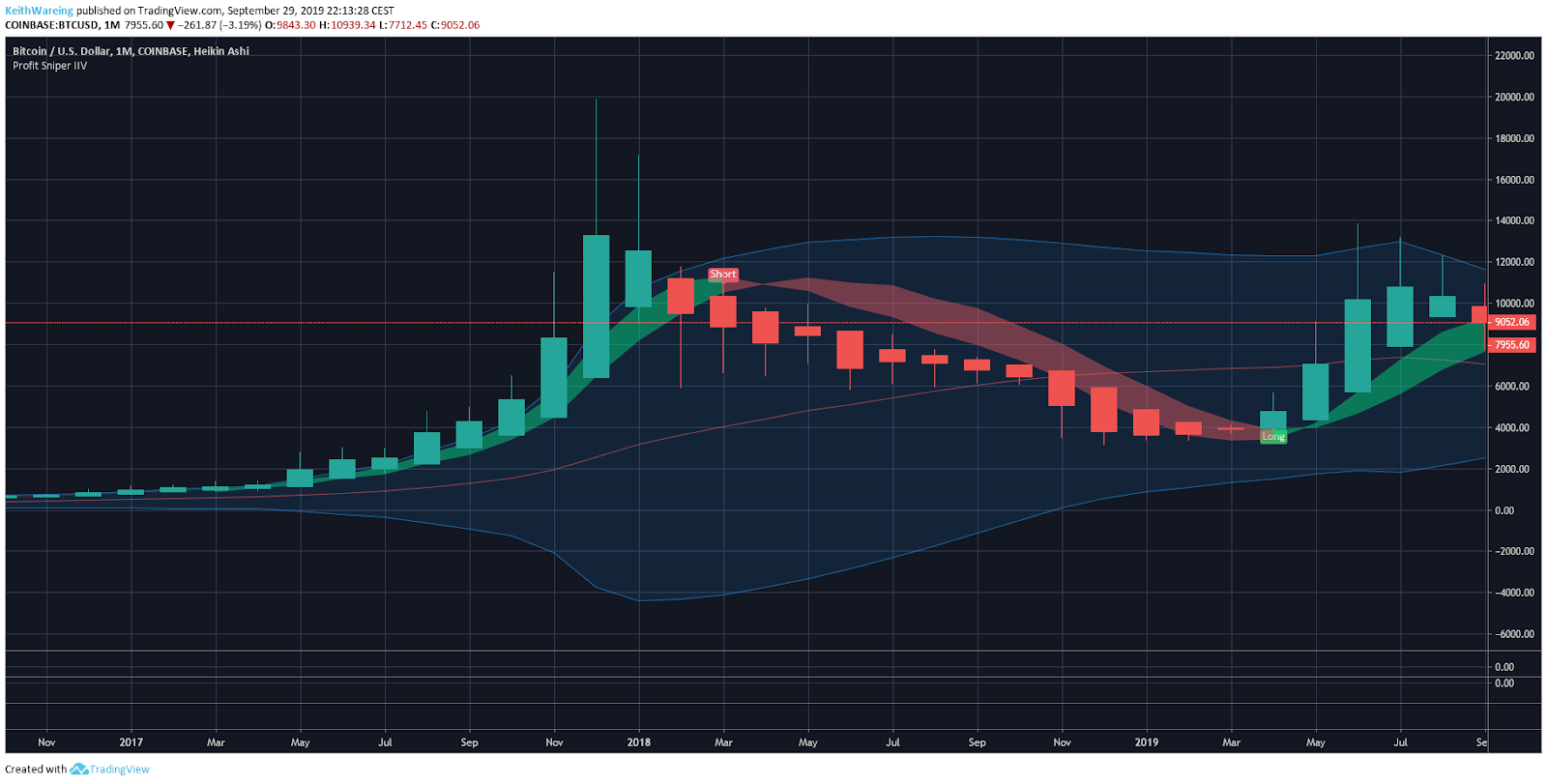 The RSI is a mixed bag

The RSI on the daily time frame provides hope for the bulls. Currently Bitcoin is heavily oversold and sits around 18. Given that any reading under 30 is considered highly oversold, this indicator provides a bit of positive news and suggests that Bitcoin price could recover in the short term.

Currently the weekly RSI sits at 50. This could mean is that the $8,000 range Bitcoin in is now could probably be where the digital asset should be.

The indicator provides little insight on what to expect next but it’s clear that Bitcoin price has been moving down from overbought territory since May. As mentioned last week, continuance along this path could lead to new lows throughout the remainder of the year.

The daily MACD is showing very early signs of a bullish cross. The MACD line appeared to reach its peak distance from the signal line on Sept. 27. Since then it has begun to slowly start to close the gap.

This combined with the pale pink on the histogram reaffirms this but it could be another week or two before the signal lines begin to cross. The time in between this impending cross could result in another week of choppy sideways trading.

The weekly MACD fails to provide the same hopium hit bulls are looking for. As traders wait for the weekly candle to close,the emergence of a pale pink candle on the histogram would signal the end of the weekly downtrend.

At the moment, this is not the case and the MACD still seems to be drifting away from signal line. This suggests that things might get worse before they improve.

It’s one thing looking at the charts and another to be aware of your surroundings. The charts are giving mixed signals this week which leads to choppy range bound price action. However, one factor that analysts might be overlooking is a week-long national holiday in China called Golden Week.

The holiday runs from Oct. 1 through to Oct. 7 and back in 2004 there were calls to have the national holiday cut back due to the disruption it caused to the regular economy. Whether or not this will lead to an impact on Bitcoin price remains to be seen, however, it could be possible that last week’s sell-off was influenced by the approaching holiday.

Since there is a strong community of crypto investors in China, this upcoming holiday may lead to a wider sell-off which would leave crypto investors in the Western Hemisphere scratching their heads and confused that Bitcoin’s price continued to fall.

If Bitcoin continues to fend off the support at $7,600 traders can expect to see the price play between the support and MA of $9,630. Both the MACD and RSI indicate that this is entirely plausible, and in fact, quite likely. If the bulls really take hold, then the next level of resistance is at $11,300.

Throughout the week, traders should look for the daily candles on the MACD to stay pale pink and even switch to green. As for the RSI, it needs to start heading up towards 50. This would ensure that Bitcoin price can maintain its current stance or start to go back up.

The writing is on the wall if Bitcoin drops below $7,600 and this would officially confirm a bear cycle. How low this goes depends entirely on how the weekly candle closes.

The next level of support is at the monthly moving average of $7,000. This will be one of the most crucial points for Bitcoin in 2019. If the price falls below this point, it’s safe to say Bitcoin is back in a bear market as the next support is at $2,500 according to the monthly BB.

With the RSI sitting at 60 and heading south, it’s not an unlikely scenario. Fortunately, the MACD histogram is still signalling green and in a bullish cross so it would take some serious selling pressure to change this.

Has Bitcoin Confirmed A Bullish Retest Of “Meme” Downtrend Line?

Crypto lobby groups are gaining traction in Washington as the threat...