Bitmain, one of the largest mining hardware manufacturers in the world, has issued two statements regarding Micree Zhan, the company’s ousted founder. The company confirmed that Zhan has been removed from the company by its shareholders in October last year and has threatened him with legal action if he was to continue to “represent” Bitmain.

The power struggle inside Bitmain, one of the largest manufacturers of mining hardware in the world, shows no signs of stopping. In the latest bout of drama coming from the company, Bitmain has issued two statements regarding Micree Zhan, the company’s co-founder.

Published on Chinese social media platform Weibo, the statements confirmed that Zhan was ousted from the company on Oct. 28, 2019. This, Bitmain said, was a decision made by the company’s shareholders.  On Nov. 5, the company approved the executive director’s decision to remove Zhan from Bitmain’s management, it said in the statement. 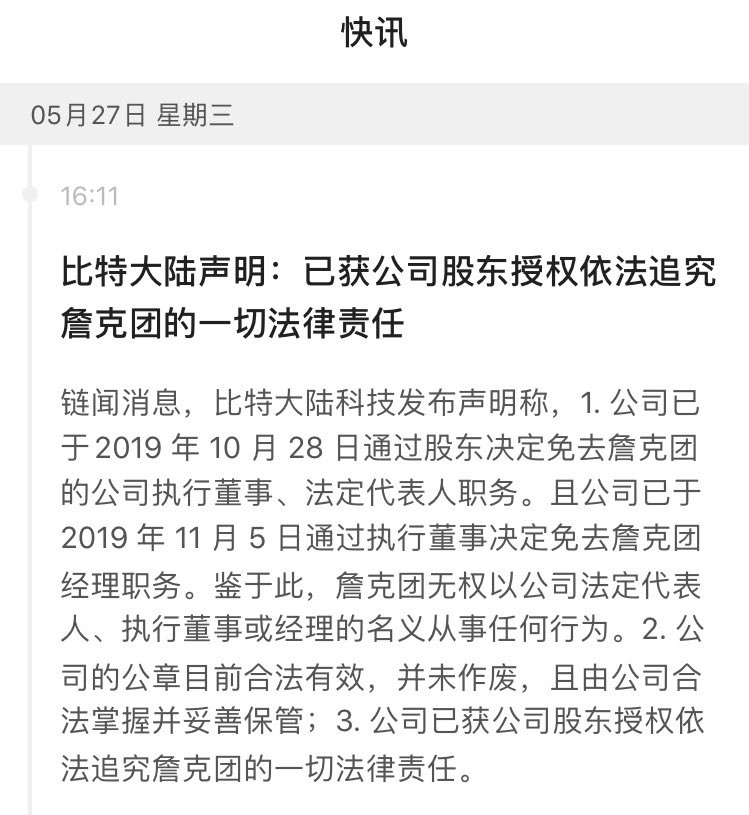 Screengrab showing one of Bitmain’s statements on Weibo regarding Micree Zhan. (Source: Twitter)

Bitmain also stated that Zhan has no legal right to represent the company or issue any kind of notices neither to the public or to Bitmain’s employees.

As Zhan has reportedly acted against the shareholders’ decision and acted as the company’s legal representative on multiple occasions, Bitmain has authorized “legal action” against him. It is still unclear whether or not the company actually filed a lawsuit against Zhan.

Bitmain went as far as to prohibit all of the company’s employees from engaging with Zhan in any matter and occasion. In the May 27 statement, Bitmain said that the company’s management and employees who are found to have engaged with Zhan or have responded to any of his requests could face legal action.

The company’s position regarding Zhan hasn’t changed in the six months since he was ousted. Back in October 2019, when Zhan was removed from his position as CEO and co-founder of Bitmain, the company’s other co-founder and current CEO Jihan Wu made similar statements and threats against his employees.

What these statements made clear is the fact that the struggle for control over Bitmain is still on. Zhan currently has two lawsuits against the company opened and is the owner of the majority of Bitmain’s shares.

Newest Crypto - October 20, 2021
0
Jefferies analyst Jonathan Petersen answered the question in his Oct. 18 research report. “It’s a fair question, but upon exploration of the topic,...

Crypto banks are the sector’s game-changers