Bitcoin has been consolidating in the time following its latest rejection at $10,000. This comes as the crypto’s mid-term market structure shows immense signs of strength, although in the short-term it does appear to be in a precarious position.

In spite of this, analysts are now widely flipping long on Bitcoin, citing a price divergence and the emergence of some large spot bids on OKEX.

The massive growth of Tether’s market cap – as compared to that of Bitcoin – is also a phenomenon some analysts are pointing towards as a reason to be bullish on the crypto.

At the time of writing, Bitcoin is trading down just under 2% at its current price of $9,490. This marks a notable decline from daily highs of over $9,900 that were set yesterday evening.

The cryptocurrency has been able to find some notable support around its current price level, although its slight drift lower throughout the past few hours does seem to point to some potential near-term weakness.

One analyst recently explained that he believes closing above $9,550 is imperative in order for Bitcoin to maintain its near-term strength.

“BTC: There’s the breakdown and bounce in low $9ks. Nice wick, watching for a close back above $9550. If not, then likely a sign that this was a local top,” he said.

The hourly close in the coming hour should offer significant insight into the benchmark cryptocurrency’s current strength.

It is important to note that some large buyers are currently propping the market, as another analyst recently pointed tolarge buy orders on OKEX as a reason why he is comfortable going long on BTC at the present moment.

“Long Here. Pretty big delta divergence. Some pretty big OKEX spot orders hitting the tape. I think OKEX is as close as you can get to being ‘signed order flow,’” he explained.

One notable event seen within the crypto market throughout the past several months is that Tether’s market cap has boomed.

Data from CoinMarketCap shows that it has ballooned from $4.1 billion at the start of the year to its current size of $8.8 billion.

This massive growth may be at least partially rooted in individuals around the globe purchasing USDT as a way to add exposure to the US Dollar to their portfolios – indicating that USD is still widely viewed as a safe haven currency during times of turbulence.

One trader on Twitter recently offered a chart showing the growth of Tether as compared to Bitcoin – suggesting that it could be bullish as some of this money may soon be siphoned into BTC. 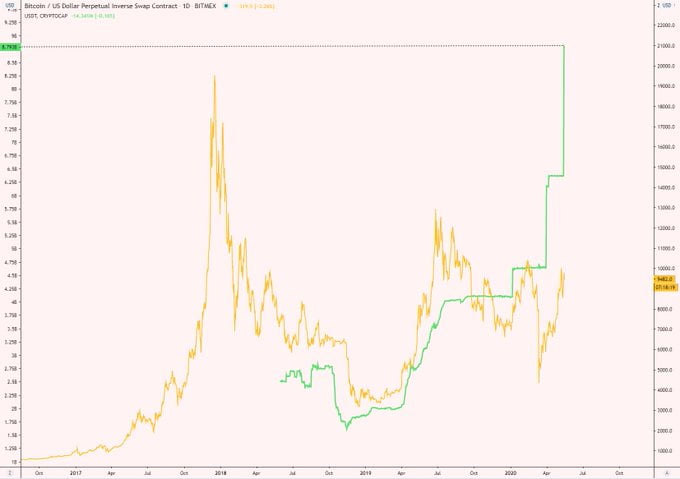