Binance first announced plans for a UK crypto trading platform in mid-June. The company has now confirmed an Autumn 2020 rollout. 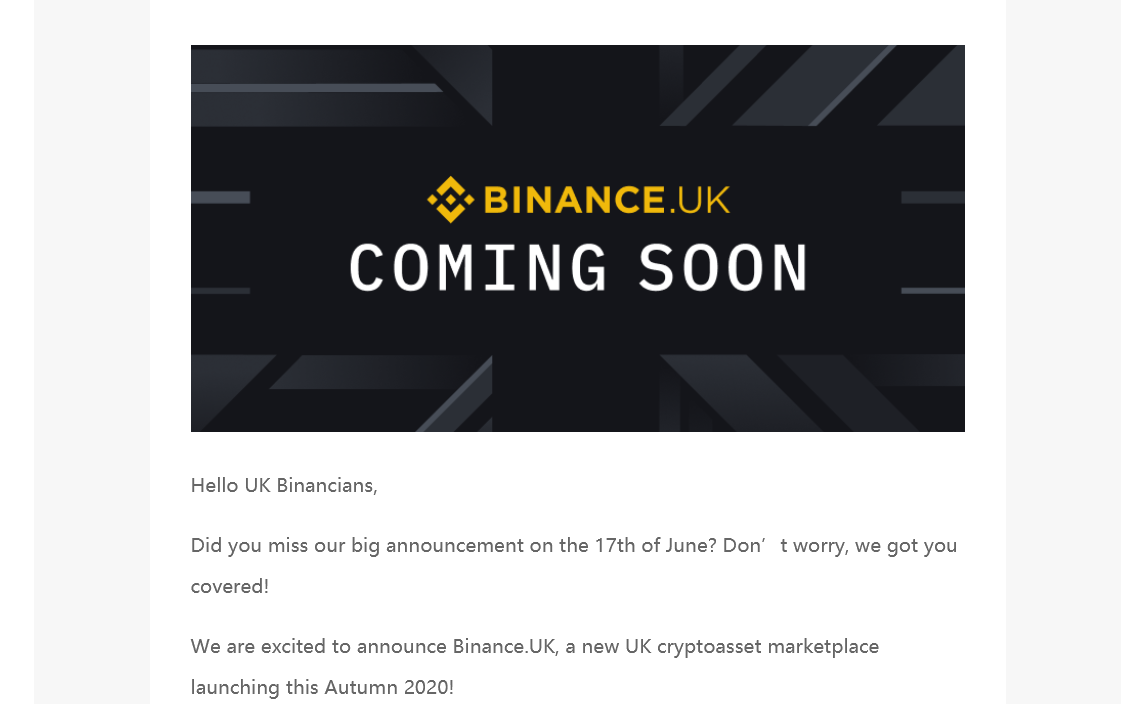 The UK platform will provide GBP and Euro on/off ramps via bank transfer through the UK’s Faster Payments service, as well as the equivalent function in Europe, the Single Euro Payments Area (SEPA) network.

Payments sent through Faster Payments are instant but can take up to two hours in some cases. The maximum default transaction limit is £250k ($316k); however, individual organizations can set their own limits.

According to a blog post from Binance, up to 65 digital assets will be available upon the launch of the UK exchange. However, at this moment in time, there is no indication of which cryptos assets will make the cut.

Binance CEO, Changpeng Zhao spoke of the importance of leveraging the UK, and European markets in expanding Binance’s growth.

“The U.K. is a significant financial epicenter with London being the second-largest financial center in the world and the leading market for foreign exchange.”

Zhao went onto say that the launch of Binance UK is foundational to the future of cryptocurrency in the region, citing the UK’s crypto-friendly stance as the reason.

“As part of our local market growth efforts around the world to bring more tangible financial access through the power of digital assets and its technology, the U.K. is at the forefront of spurring larger interest in the region and throughout Europe. We hope Binance.UK will serve as a stepping stone for the next generation of finance.

The launch of Binance US, in September last year, was met with much confusion. In line with regulatory agreements, Binance.com would block US customers from using its platform.

Differing state laws mean residents of 13 US states, including New York and Texas, are unable to access Binance US.

UK users are reporting similar concerns. At present, there’s no word on whether Binance.com will block UK users from using its platform. But it seems likely given the experience of the US rollout.

A multitude of other questions still remain unanswered. One Reddit user spoke about the lack of information over the coins to be listed on the UK platform. Another raised the issue of whether they will need to re-register their KYC information.

Much like Binance US, the UK version is an affiliate operation. The branding and underlying technology come from Binance, who is also a stakeholder, but local versions remain separate legal entities. Of more considerable significance is the macro implication of launching Binance UK when Brexit remains unresolved.

According to the BBC, the UK officially left the EU on January 31, 2020. However, eurocrats have yet to agree on the finer details.

“The UK formally left the EU on 31 January 2020, but there is still a lot to talk about and months of negotiation to come. While the UK has agreed the terms of its EU departure, both sides still need to decide what their future relationship will look like.”

At present, the panic situation is dominating proceedings, meaning dealing with Brexit has taken a back seat. With that, uncertainty over the financial regulatory relationship between the UK and Europe remains.

Zhao stated that he sees the UK platform as a gateway into Europe, but with Brexit negotiations still incomplete, the timing of the launch couldn’t be worse.