The halving has been and gone — and so far, it hasn’t been the cataclysmic event that some in crypto circles feared. Some market analysts have now set their sights on what will happen next. Cointelegraph’s Keith Wareing says Bitcoin is on the cusp of ending a 46-week descending channel if it manages a weekly close above $9,200. (At the time of writing, BTC stood at $9,728 — giving it plenty of headroom even in the event of a sudden fall.) According to Wareing, achieving this “will be the single most bullish sign that Bitcoin has seen since before the 2017 bull run” — with $9,980 as the next level of resistance and a target of $11,600 lying ahead. Failing to hold $9,200 means $8,790 is the first level of support, followed by $7,600. Even if this happens, Wareing says he would maintain a bullish bias. “A bearish outlook for Bitcoin is simply not something I see as likely,” he adds.

After months and months (and months) of wrangling with the U.S. Securities and Exchange Commission, Telegram has admitted defeat and abandoned the Telegram Open Network, as well as Gram tokens. The encrypted messaging platform said its decision was in response to U.S. court prohibiting Telegram from distributing Gram tokens worldwide. In a withering blog post, Telegram CEO Pavel Durov wrote: “This court decision implies that other countries don’t have the sovereignty to decide what is good and what is bad for their own citizens. If the US suddenly decided to ban coffee and demanded coffee shops in Italy be closed because some American might come there — we doubt anyone would agree.” Before scrapping the embattled project, Durov had offered a reimbursement scheme offering TON investors two choices: an immediate 72% refund, or a 110% refund in 12 months. It appears over 80% chose to get their money back right away, but don’t expect the drama to end here — reports suggest many investors are now contemplating a lawsuit. 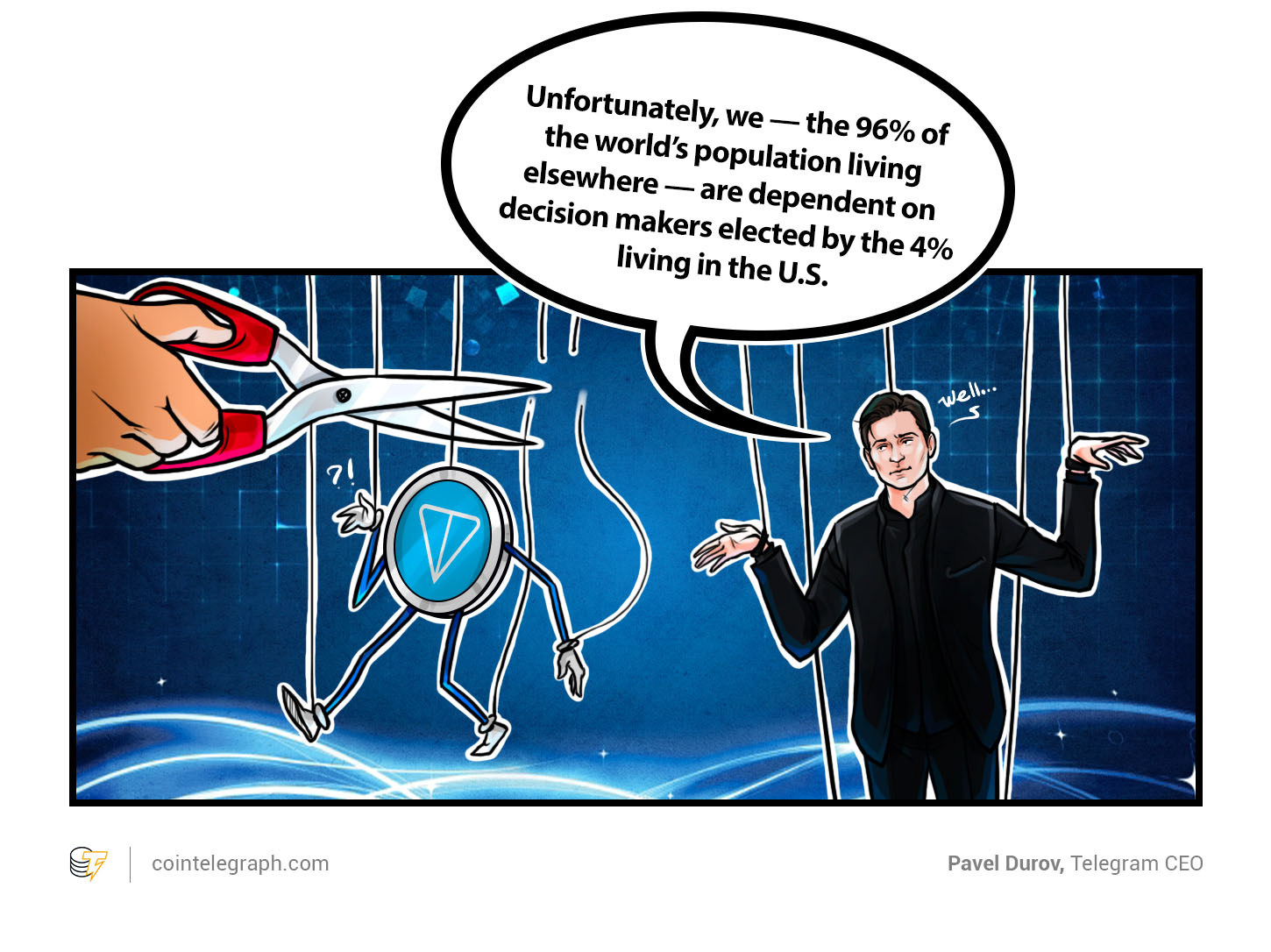 Already under fire over his handling of the coronavirus pandemic, U.S. President Donald Trump might have another problem on his hands: a leak of compromising information ahead of November’s all-important election. The REvil ransomware group — also known as Sodinokibi — claims it has got its hands on files that would embarrass Trump after it hacked a law firm representing some of the world’s biggest film stars. It has now doubled the ransom it is demanding from Grubman Shire Meiselas & Sacks, and it has warned leaks about Trump are coming next. “There’s an election going on, and we found a ton of dirty laundry on time,” the hackers said. The group’s post was accompanied with a chilling message to Trump, urging him to “poke a sharp stick” at the law firm within a week if he wanted to remain in the White House. Voters were also warned: “We can let you know that after such a publication, you certainly [won’t] want to see him as president.”

Here at Cointelegraph Towers, we had big plans to cover Bitcoin’s third halving last Monday — meticulously planning a full day of programming for a YouTube live broadcast. Then, six hours and 42 minutes in, the livestream was abruptly deleted. Thankfully, the show was almost at an end, but it meant almost 2,000 viewers were locked out of our special coverage. YouTube is notorious for bans and censorship of crypto-related content, and it’s driven a number of crypto content creators to competing platforms that operate on decentralized principles. The reason given for cutting the feed was that the halving program was “harmful or dangerous content” that violated YouTube’s community policy — alas, despite appealing the decision, we’re yet to find out specifics on how we flouted the rules.

It started with a simple tweet to a crypto journalist. The renowned author of the Harry Potter series, one of the world’s richest women, had written: “I don’t understand Bitcoin. Please explain it to me.” We were among those who were most happy to oblige — explaining how the cryptocurrency works and describing it as “magic.” Alas, it seems the cacophony of tweets proved too much for Rowling. She was confronted with a barrage of complicated charts, GIFs of baboons, and endless howls of outrage from Bitcoin devotees who demanded to know why she hadn’t bought into the asset yet. Rowling later tweeted that she feared she’d be unable to log into Twitter ever again without someone getting angry that she wasn’t a hodler. “One day you’ll see a wizened old woman in the street, trying to trade a Harry Potter book for a potato. Be kind. She did try to understand,” Rowling wrote. 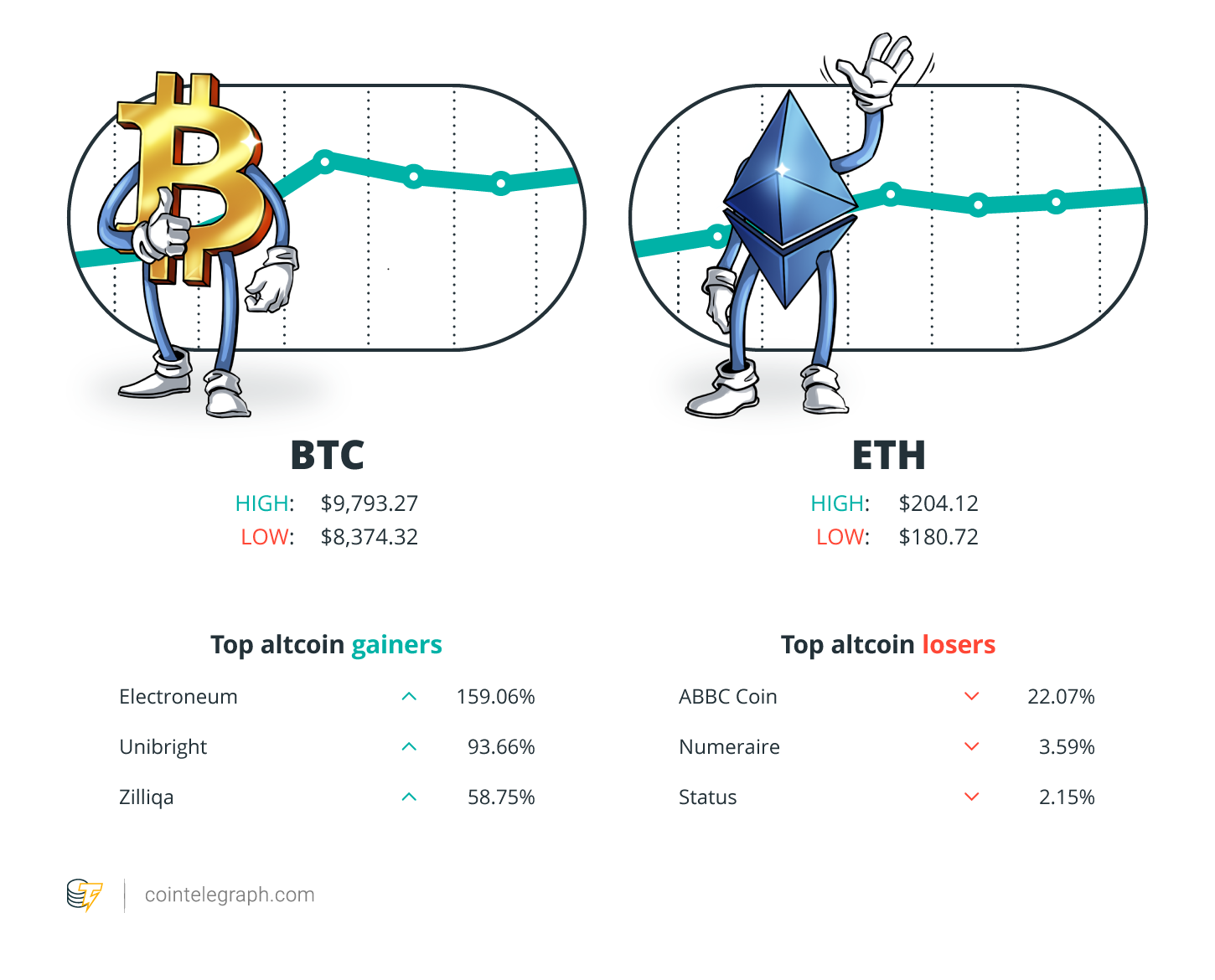 “I don’t think it’s very easy to buy cryptocurrencies in Africa right now overall, so we want to help improve that situation. […] It is very much an untapped market.”

“The next person we’ll be publishing is Donald Trump. There’s an election going on, and we found a ton of dirty laundry on time.”

“The idea that some random startups are going to build their own stablecoins, perhaps with hundreds of millions of installs of a messenger client, whether it’s Facebook or Telegram or someone else, potentially challenge the sort of central bank digital currency or existing central bank currencies? […] That’s got to be triggering for regulators.”

“One day you’ll see a wizened old woman in the street, trying to trade a Harry Potter book for a potato. Be kind. She did try to understand.”

The sky-high predictions for BTC prices are coming in thick and fast, folks. Real Vision founder Raoul Pal believes Bitcoin can reach $467,000 in the long term — joining hedge fund managers such as Mark Yusko in insisting that the coin can increase 4,714% from current levels. A crucial milestone for this to happen seems to involve BTC’s market cap overtaking gold’s, with Pal predicting that “a $10 trillion number is easily achievable within that process.” It is worth noting that Bitcoin has a loooong road ahead to make this a reality. If you combine the value of every BTC in circulation, you get a figure of about $179 billion — barely 2% of the precious metal’s $9 trillion market cap.

Not everyone is teeming with optimism about the current state of the Bitcoin market. Prior to the halving, Unbounded Capital managing partner Zach Resnick had warned that BTC was at risk of a death spiral that would see transaction fees peak, block times increase and the mempool become congested. All three of these things have now started to happen, meaning the signs of the apocalypse could be upon us. Resnick argues that the “death spiral” scenario isn’t priced in and that the BTC community underestimates the probability that it could happen. Although he estimated there’s just a 2% or a 3% chance that the halving would kill off the blockchain completely, he told Cointelegraph that BTC is being priced as if this was impossible. In any case, Resnick believes there’s another dangerous scenario that’s more likely: “I put at least a 10% chance on kind of a big flash crash.” 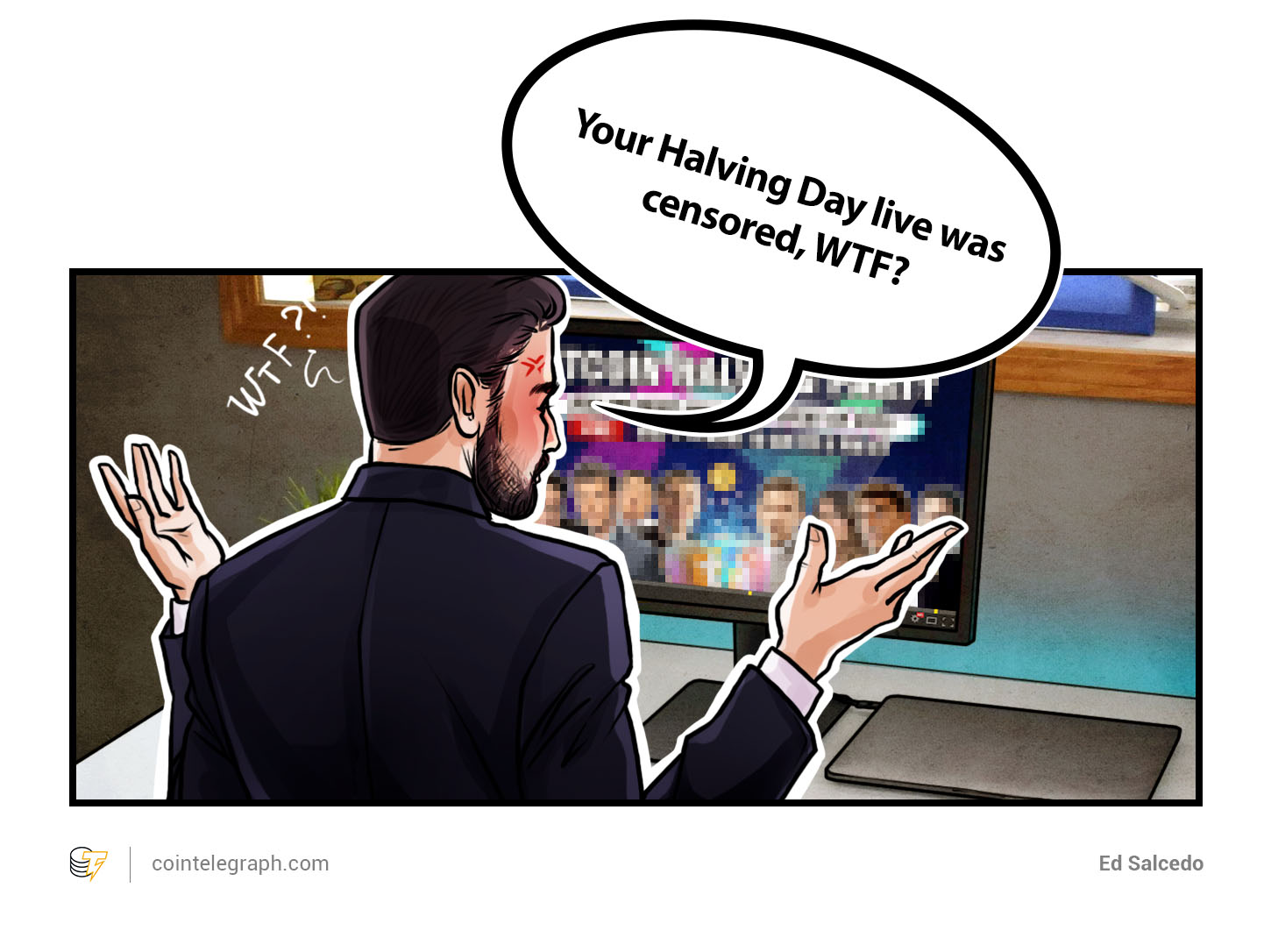 Reports suggest that North Korea is ramping up crypto-based phishing scams in an attempt to prevent a financial meltdown during the coronavirus pandemic. According to the U.K. Mirror, seclusive leader Kim Jong Un is backing a gang of hackers known as the Lazarus Group, who appears to be launching a campaign of advanced persistent threat attacks. ESTsecurity, a Seoul-based firm, claims Lazarus is “increasingly engaging” in cybercrime activities — and some of these attacks are happening in the U.S. Many of these incidents appear to be targeting people trading crypto, with Emsisoft threat analyst Brett Callow warning they “undoubtedly represent a serious threat.” He also stressed that it’s exceedingly difficult to establish ties between Lazarus and Pyongyang, even if the claims are well-evidenced.

A scam that took in roughly $1 billion worth of crypto from over 715,000 victims may be linked to a notorious Ponzi scheme. One of Wotoken’s core perpetrators reportedly has ties to PlusToken, a multibillion-dollar ruse that is believed to have impacted the price trajectory of Bitcoin on numerous occasions throughout 2019. Wotoken has been described as a “super large MLM network,” and a trial began in China’s Yancheng City on May 14. It’s alleged that the scam claimed to generate returns for users through employing algorithmic trading bots, offering referral commissions to affiliates. However, as with most MLM scams, the advertised software didn’t exist. Wotoken had 715,249 registered users when it was active from July 2018 through October 2019, resulting in the illicit company accumulating a haul including 46,000 BTC and 2,000,000 ETH.

Victor Zhang argues that tokenized technological solutions would be a better option for identity verification at scale without sacrificing people’s data and their privacy. 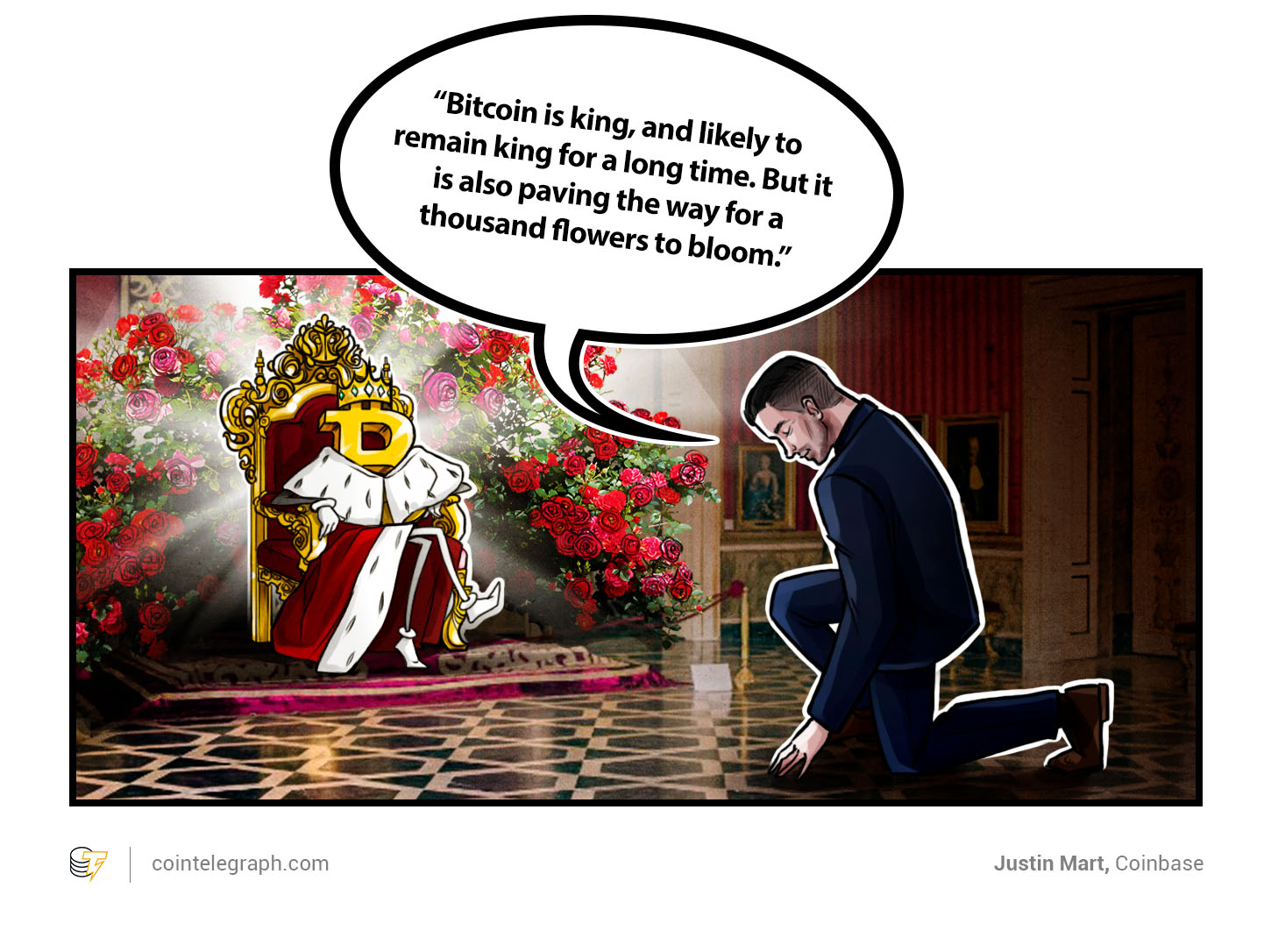 As U.S. pumps trillions into economy, Bitcoin price likely to be affected

The U.S. is printing dollars and slashing interest rates to help the people, but will it affect the crypto market? Shanna Fuld takes a look.

Time for ETH to rise and shine as futures trading now available in the U.S.

Bitcoin futures trading debuted back in 2017 — and three years on, it’s ETH’s turn. Osato Avan-Nomayo delves into how it’s going to work, and what it’ll mean for spot prices.