Bitcoin’s price action has been rather volatile over the past two weeks, with the asset whipsawing between the $8,000s and $10,000s.

In the past week alone there was approximately $250 million worth of position liquidations on BitMEX alone due to the volatility, according to data shared by crypto derivatives tracker Skew.com.

Yet the price action has actually been consolidation from a macro perspective. Bitcoin is now approaching the apex of a crucial triangle pattern that has contained Bitcoin’s price action for the past few months.

Its breakout will most likely decide the trend for the next few months, maybe even lower. That’s to say, should BTC break higher, it could be at the start of a full-blown bull run.

Related Reading: Bitcoin Price Looks Like a “Carbon Copy” of Gold, and That’s Bad for Bulls

Bitcoin Is Reaching the Apex of a Triangle Pattern

A cryptocurrency trader recently shared the chart below, noting that Bitcoin is currently consolidating around the apex of two converging technical levels:

Due to the importance of these two levels and this triangle as a whole, the breakout will be important in determining in what direction the crypto market heads in the medium term.

“I’m still waiting for a HTF move before making a trade. Both sides have been tapped multiple times. I wouldn’t want to guess which one breaks first,” the analyst that shared the chart wrote in reference to its importance. 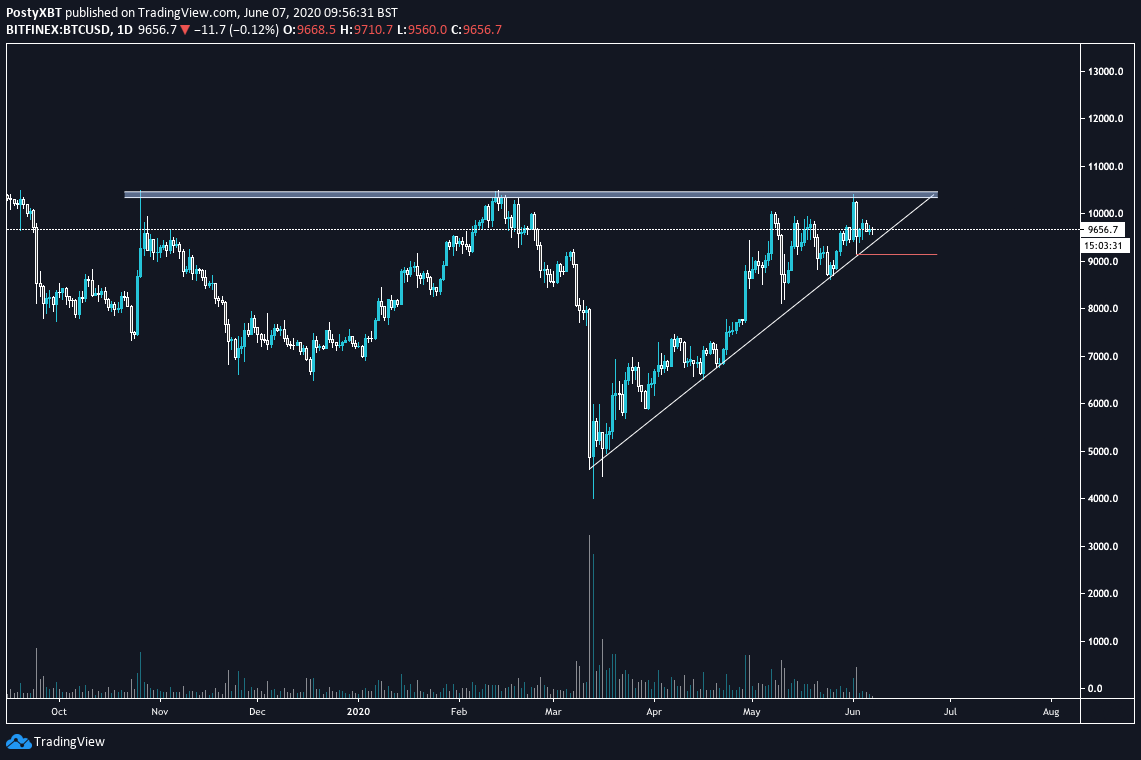 BTC price chart shared by cryptocurrency trader “Posty” (@PostyXBT on Twitter). The chart shows that BTC is approaching the apex of a triangle formed by two crucial trendlines: the $10,500 horizontal resistance and the uptrend from the March lows.

Should Bitcoin attempt to break out of the triangle, it will happen within the next few days and weeks as the price continues to tighten ahead of expanding either higher or lower.

Analysts Are Betting on an Upward Breakout

Analysts are currently betting that Bitcoin breaks upward from this formation, citing a confluence of technical factors.

As reported by NewsBTC previously, Bitfinex order book data is showing that there is clear buying pressure at the $9,500 range.

This is important because order book data has been extremely accurate in predicting Bitcoin price trends over the past few months. As can be seen in the chart above, the order book data called four previous attempts at taking $10,500, while also suggesting BTC would rally higher after March’s lows.

On-chain indicators are also bullish, with blockchain analytics firm Santiment noting that the Bitcoin bear trend that began after March’s crash just ended according to a profitability metric.

Litecoin Could be Coiling up for a Massive Rally Despite Lackluster...