Bitcoin’s third halving is less than a day away and the cryptocurrency community remains divided on whether the price will rise or drop after the event. Interestingly, on-chain data from previous halvings suggests that after the halving Bitcoin price may not see an immediate drop.

Google Trends data shows that searches for the halving have already surpassed previous all-time highs, and the crypto community has been issuing a variety of price estimates for the post halving price.

Some analysts have pointed to the Efficient Market Hypothesis to support their view that the halving is already priced in, meaning it’s a foreseeable event investors can take into account early. Even a prominent Bitcoin whale who’s known as Joe007 recently argued that the price of Bitcoin would crash after the halving.

What does on-chain data show pre-halving

Blockchain data shared by on-chain data analysis firm CryptoQuant shows that miners are not keen on selling their newly minted BTC ahead of the halving. Using the Miners’ Position Index (MPI), CryptoQuant found that over the last three months, miners have been avoiding selling. 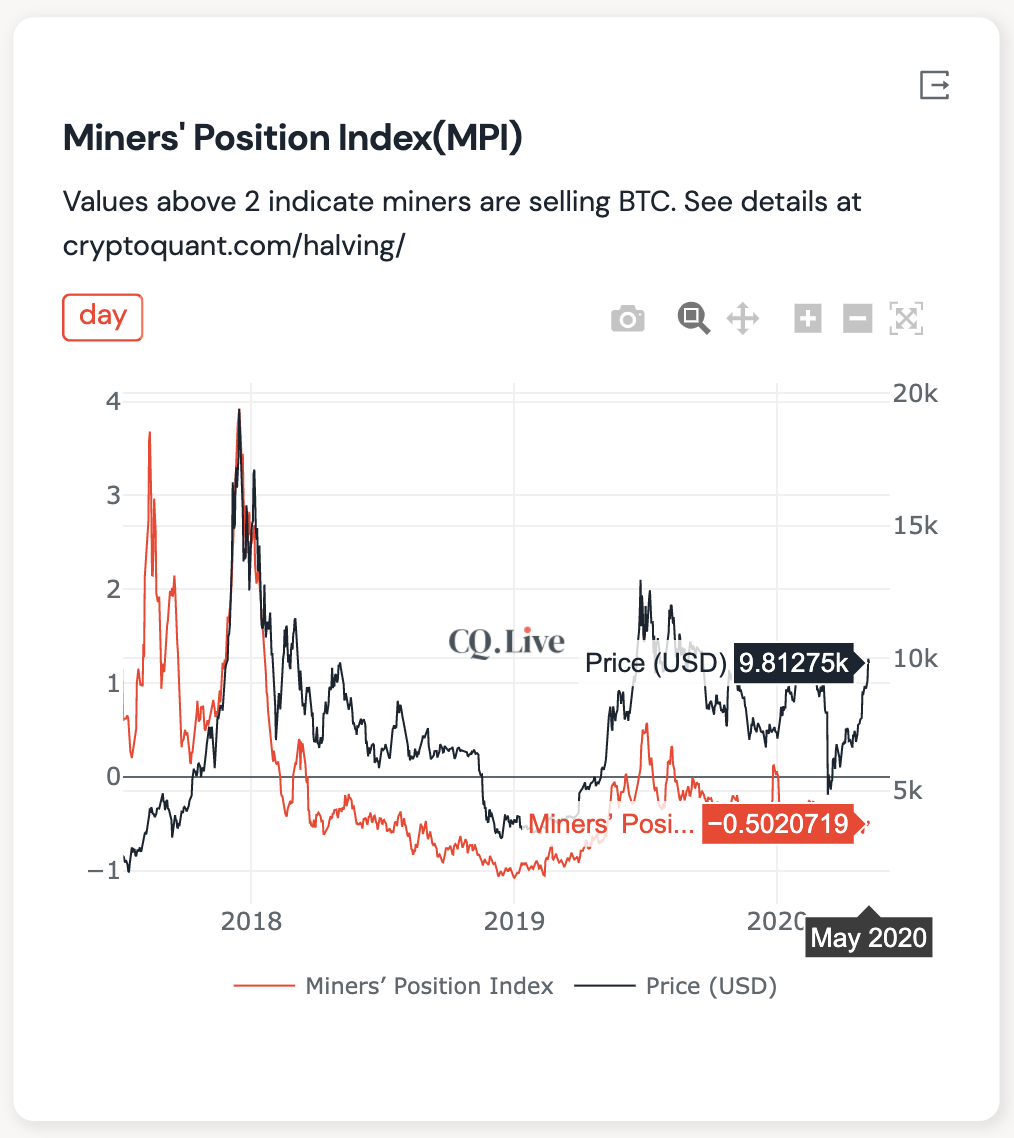 An MPI reading above 2 suggests miners are selling their BTC after mining, while a negative value shows they’re avoiding selling as much as possible in favor of accumulation.

As shown on the chart above, the MPI was slightly above 0 in December 2019 and it began to drop in January. By February the reading had hit -0.5.

Miners do not sell right away

Bitcoin miners have historically been a driving force behind Bitcoin’s price as they are the suppliers of new coins in the market. They are also one of the primary groups that create constant sell pressure for BTC as they liquidate newly minted coins to cover their electricity and operating expenses.

Thus, miner sentiment is important for the market and something investors keep a close eye on. Back in 2017, when the price of Bitcoin hit a new all-time high near $20,000, the MPI hit a high of 3.9, showing miners sold coins they seemingly deemed overpriced.

In the subsequent year-long bear market, the MPI dropped below -1, showing miners avoided selling as much as possible despite the low prices.

Data shows that in the first and second halvings, miners did not sell their funds right away. Ahead of the halvings, the MPI was below 0 and as the price increased so did the MPI. When the MPI reading surpassed 2 just a few months after the halving, the price crashed.

Furthermore, when the first halving occurred in November 2012, miners rode the bull run until April 2013, then they finally started selling their coins.

After the two previous halvings, the Bitcoin price did not skyrocket immediately after the halving. The Bitcoin price had risen over several months. If traders want to avoid trading risks, the most important thing is monitoring whether whales and miners are cashing out rather than expecting short-term price changes. 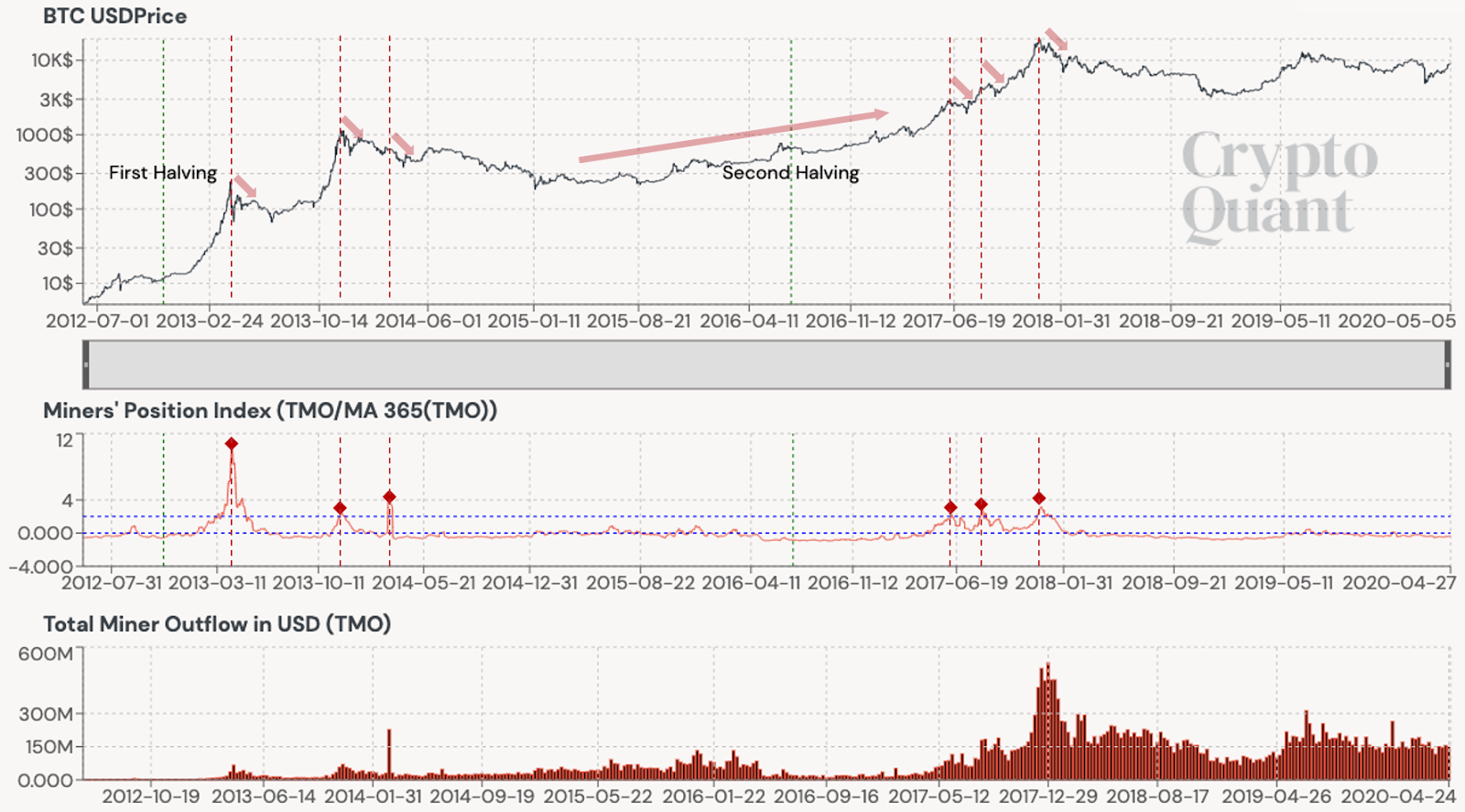 Bitcoin miners’ role is expected to decrease in in 2020

The cryptocurrency space has evolved significantly since the last halving in 2016. Data from cryptocurrency data provider CryptoCompare shows that throughout 2020 daily trading volumes have consistently been at least 10 times larger than those in 2016.

In 2016 Bitcoin volumes on spot exchanges rarely exceeded $1 billion a day, while they now consistently surpass $10 billion a day. Readers will also note that April 30 saw record-breaking volumes leading to the Bitcoin halving. 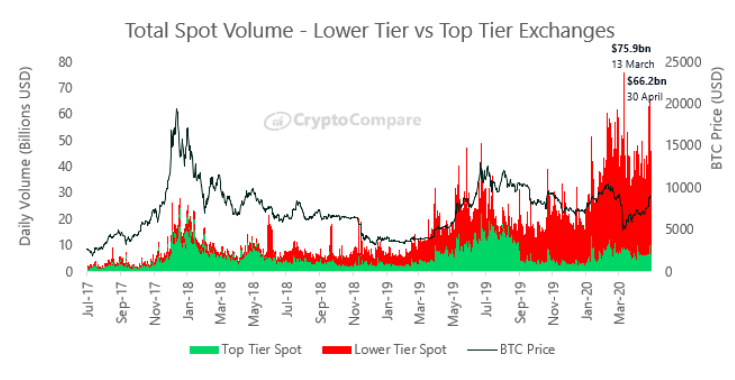 Crypto derivatives markets have also grown significantly, with Binance, Huobi, OKEx, and BitMEX trading well over $50 billion each throughout April. This suggests that Bitcoin miners are now smaller players in the space, although they are still responsible for creating constant sell pressure in the Bitcoin price.

I think we may get a bit of the buy the rumor, sell the news. In 2016 we had a significant 80% run-up before halving and that got sold into halving and the day of halving we sold off further. We bottomed 3 weeks beyond halving and began an amazing bull run. This time we haven’t had the run-up but we’re getting some buy-side demand presently. I think it gets sold right into or after halving, but I also think that the selloff will be smaller and shallower as we didn’t have the run-up.

Miner selling pressure, as such, may not be expected to have such a significant impact on the price of Bitcoin right after the halving this year.

Obviously, past performance is no guarantee of future results but it is worth considering given that miners are minting 1,800 BTC (nearly $18 million) per day.

Cryptocurrency exchange inflows may be a better indicator of what is going to happen at the time of the halving. These precede significant price rises and sharp drops, as miners and whales move their coins to trading platforms before shifts in price occur.

As shown by the exchange inflow chart below, there was a surge before and during the March 13 market crash to $3,750. 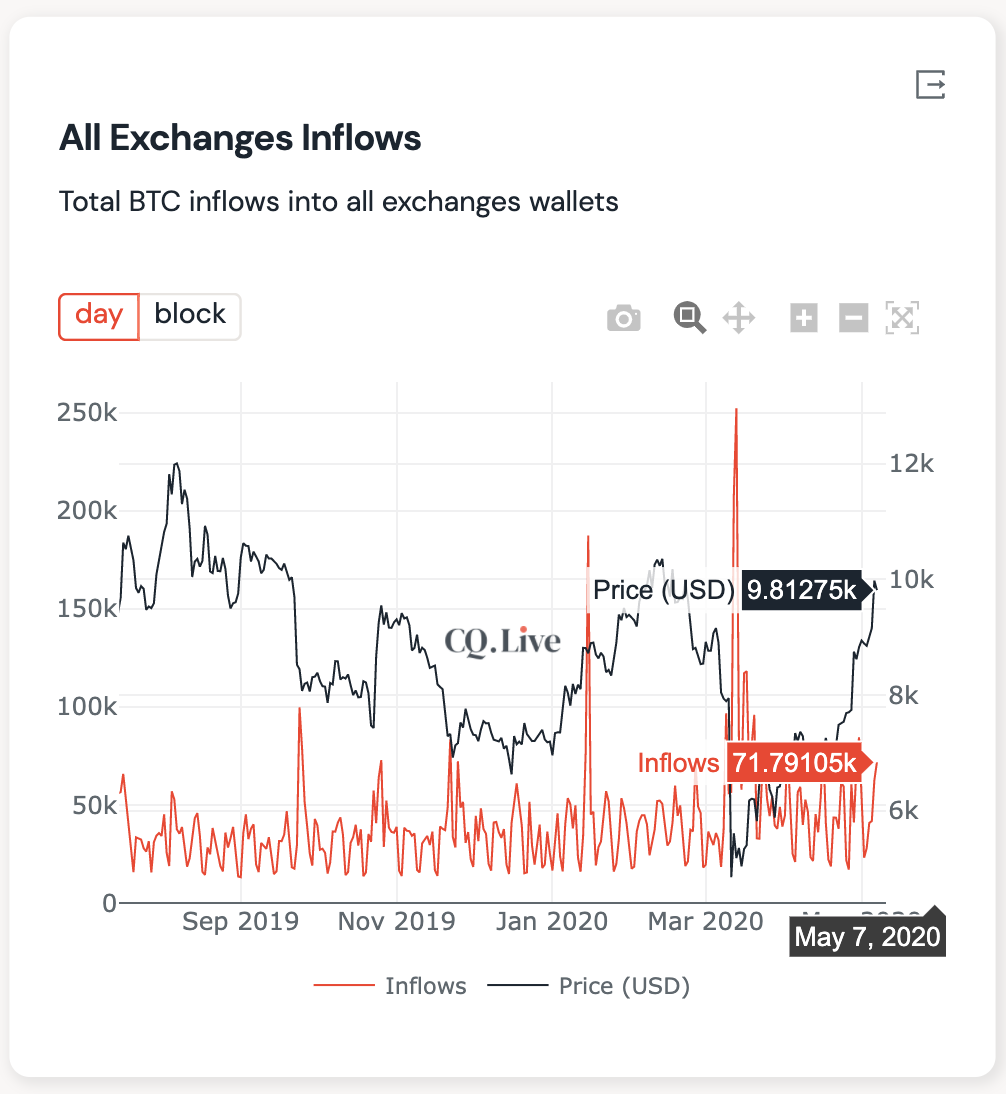 After the Black Thursday crash, inflows have remained relatively low as whales and miners were not moving coins from their wallets to trading platforms. This suggests that they may be looking for the price to perform as it did during the last two halving events.

Whatever the short-term price action is after the halving, many are bullish about the event, especially in the long-run. According to D’souza:

Overall, it seems we’re transitioning into a bull market. The fundamentals have never been better for Bitcoin and funds, retail, hodlers are deploying capital towards Bitcoin which counterbalances sell pressure.