The shockwaves from yesterday’s explosion in the oil markets continued to damage oil prices and shrapnel from the blast caused damage to equities today as U.S. markets closed in the red after a nearly 3-week rebound.

West Texas Intermediate crude closed down 9.49% at $9.06, and June 2020 futures dropped from $22.58 to $13.12. What is clear is that investors remain fearful about the future of the entire industry as the coronavirus pandemic continues to dampen demand for oil.

Is it over for stocks?

Before the start of this week the S&P 500 and Dow had recovered approximately 30% of the losses from the Feb. 20 correction which quickly brought markets to historic lows. As shown on the 3-day chart below, the S&P 500 had rallied within a hair of the 61.8% Fibonacci retracement level, a point which many analysts forecast would be challenging to overcome.

Rejection at this level is likely to crush the narrative of a V-shaped recovery like the one witnessed in late December 2018. 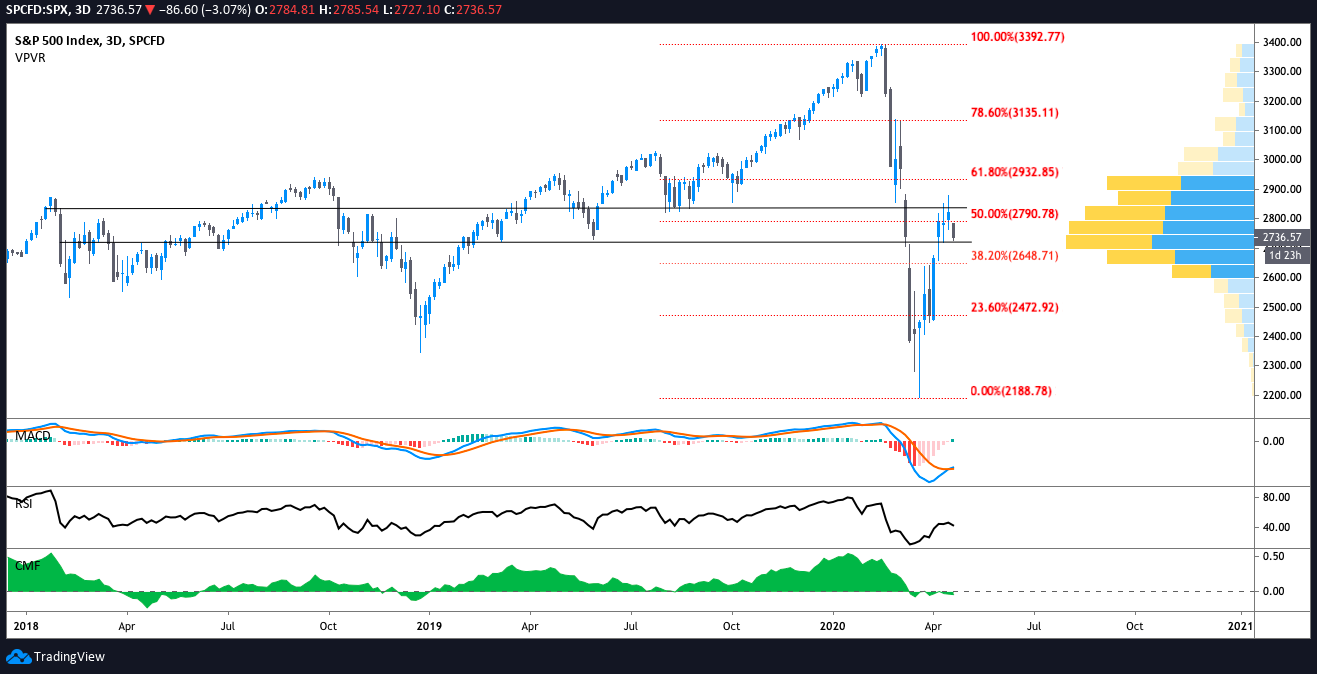 Traders who swear by the TD Sequential indicator will have also noticed that last Friday (April. 17) the market flashed a sell signal when a 9 appeared over the daily candle. 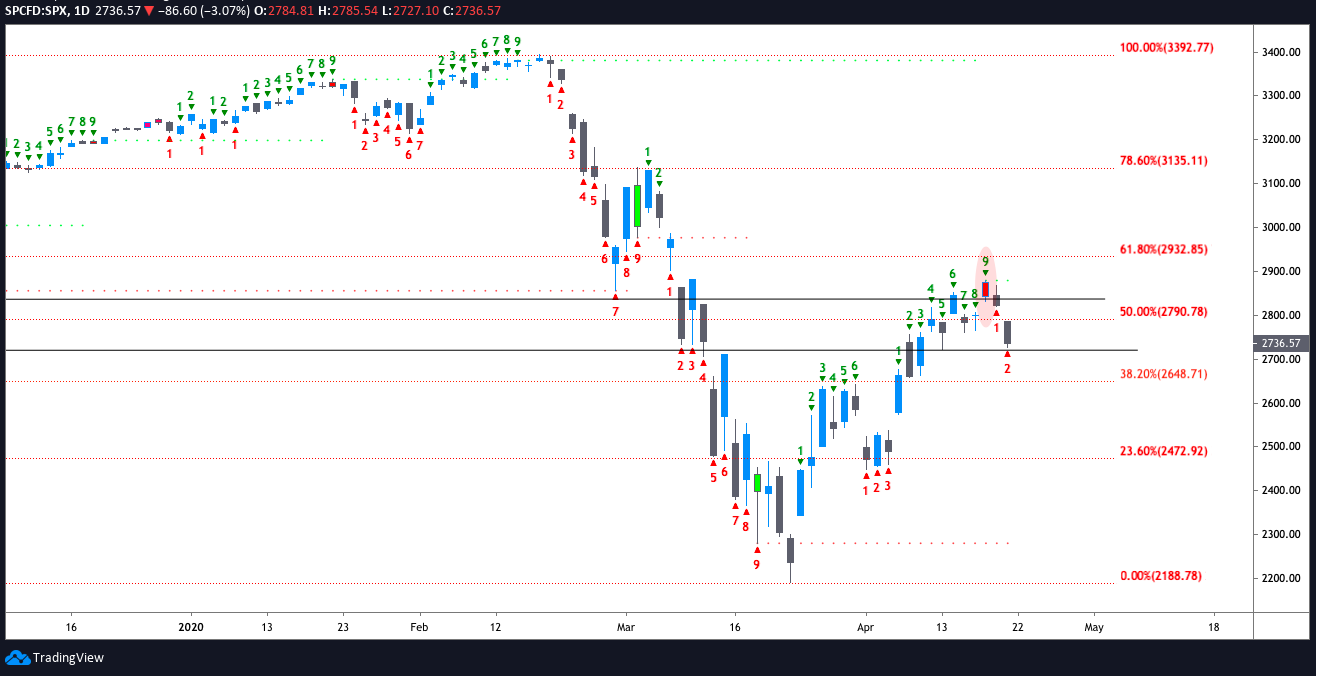 The Dow is in a similar position having met resistance at the 50% Fibonacci retracement which is slightly below the VPVR point of control at 246.22, a pivot point for the Dow. At today’s close both indexes were down 5.07% and 5.30% respectively. 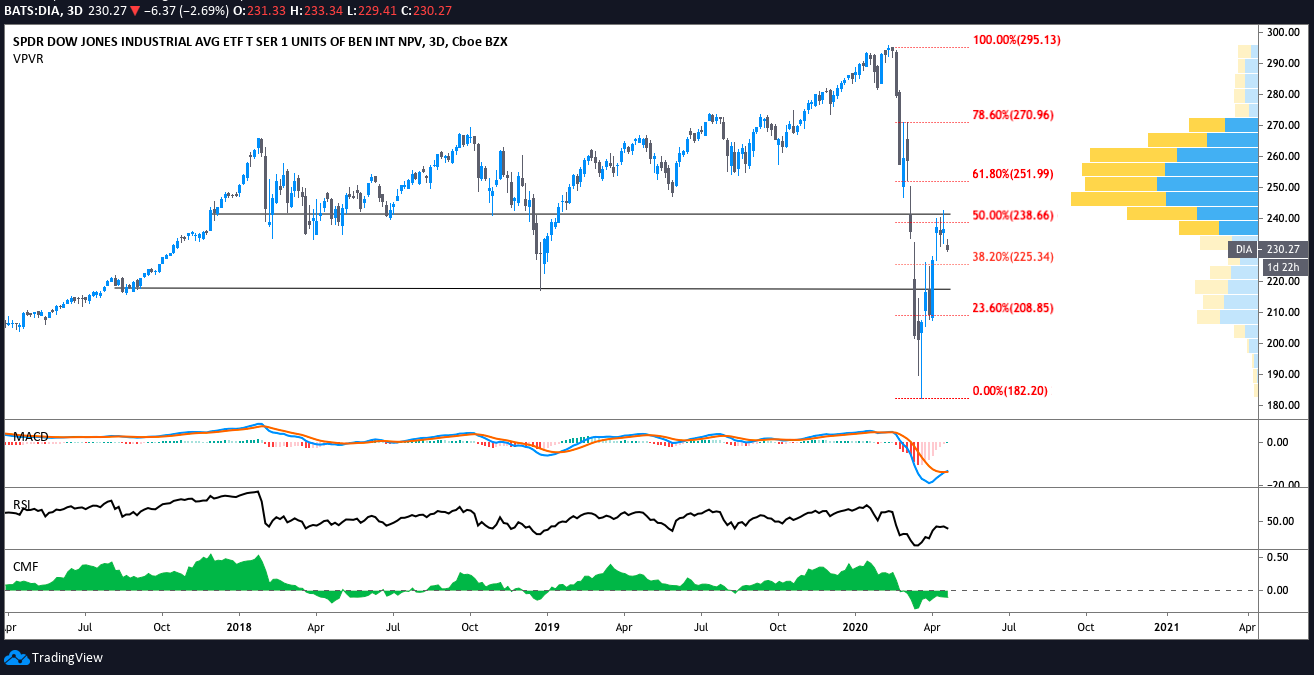 For the past few weeks analysts from traditional markets have debated whether or not a strong recovery was in the making. Recently Goldman Sachs forecast that the current recession would be nearly 4 times worse than the 2008 housing crisis.

Meanwhile, pro business proponents from the Trump Administration have said that the current economic downturn is unsubstantiated as the markets will snap back to profitability once economic activity recommences. 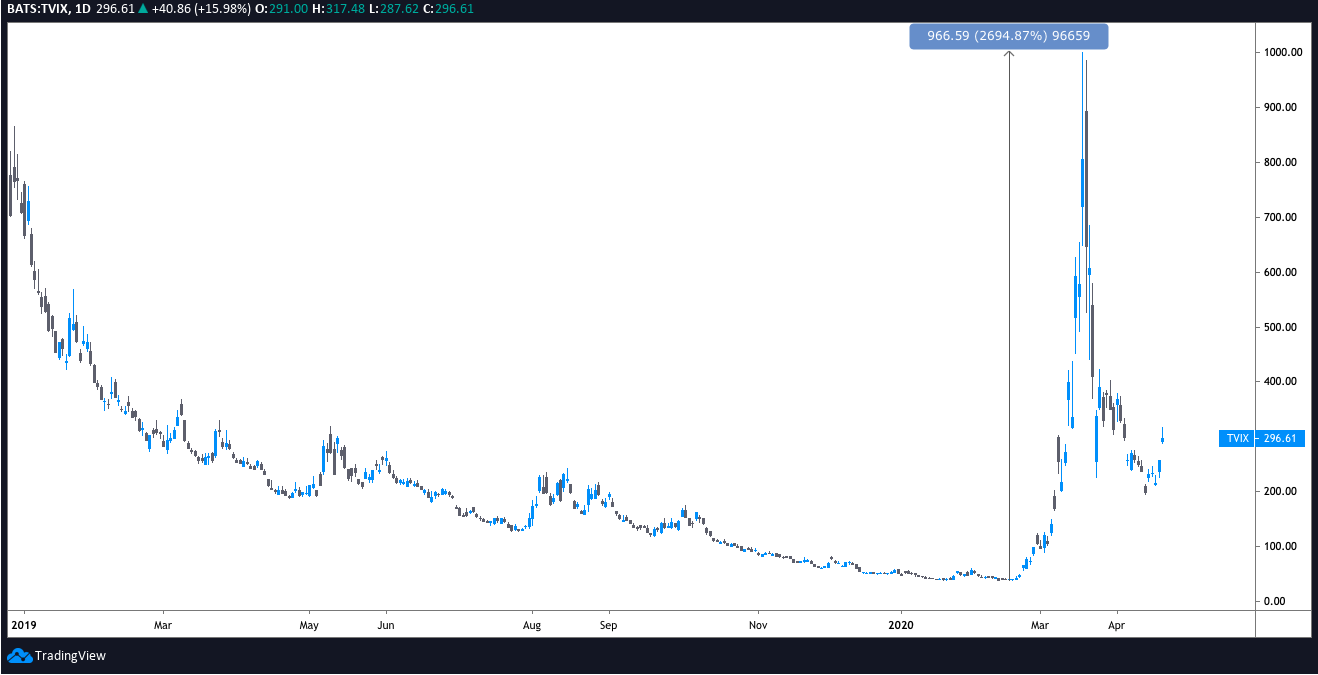 In fact, all three have just finished their bottoming process after coming down from incredibly strong rallies that kicked off right as the coronavirus pandemic began to accelerate its rate of infections in late February. Take the above TVIX chart as an example.

Meanwhile, amidst the chaos in traditional markets, Bitcoin (BTC) price has remained relatively stable, ony pulling back 4.24% to what is so far proving to be a strong support at $6,850. 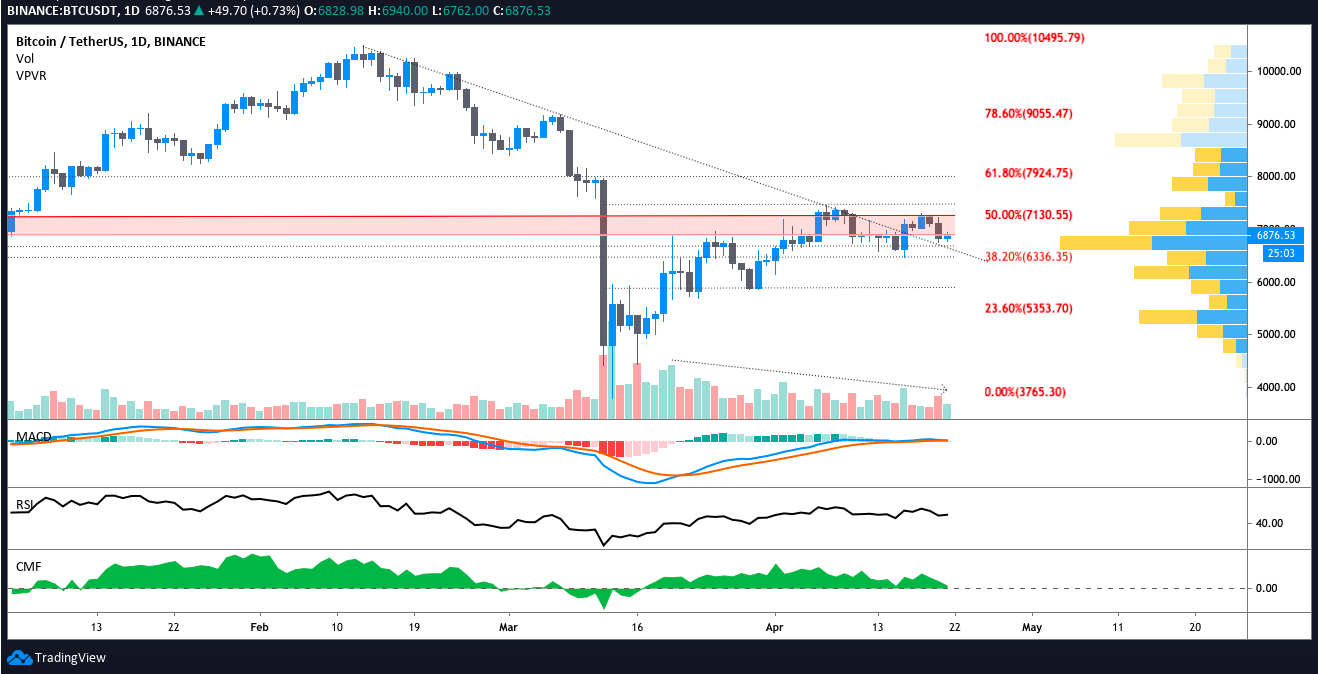 At the time of writing the digital asset is attempting to re-enter the $6,900-$7,260 zone where the price spent the last 18 days trading. Re-entering this zone would be a positive step forward as the daily chart shows below the VPVR high volume node from $6,850-$6,600 Bitcoin is vulnerable to a drop to the $6,485 support and below this $6,200. 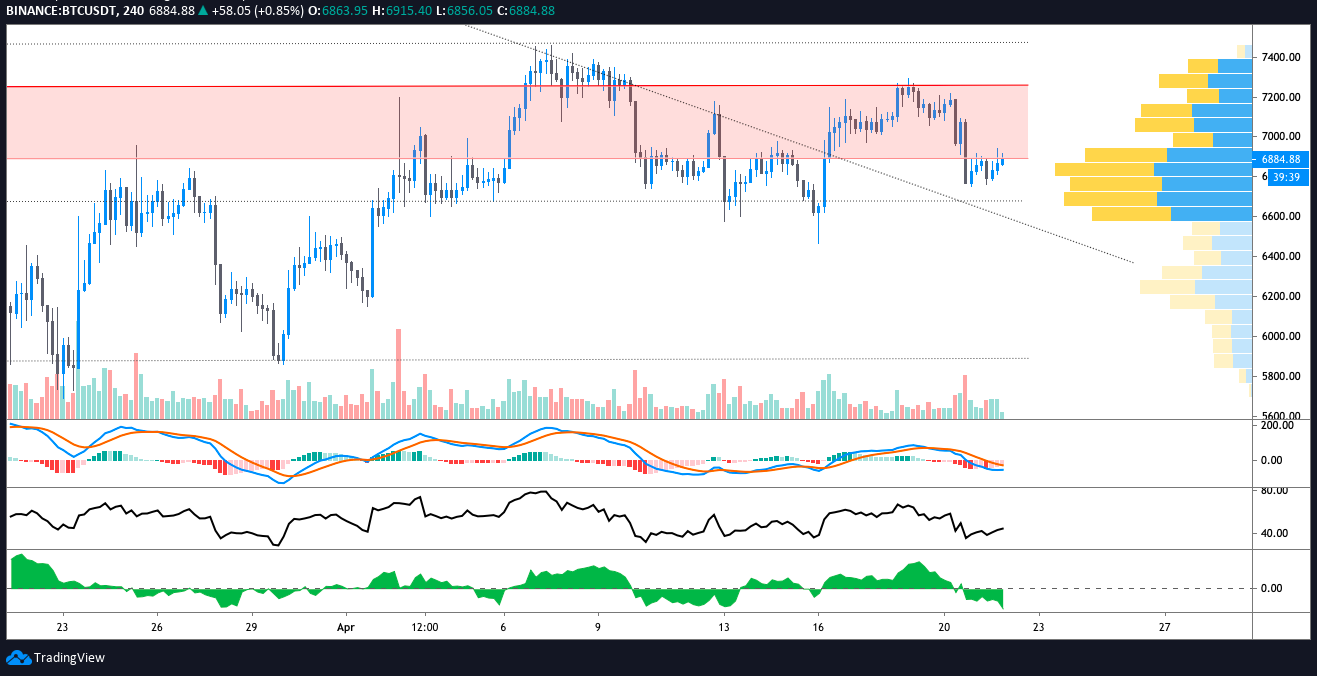 Another positive development is the pattern of higher lows and increasing buy volume on the 4-hour timeframe. If Bitcoin can reclaim the $6,900 level as support then the price can push above the Bollinger Band moving average at $7,055 and possibly exploit the small VPVR volume gap between $6,930-$7,050.

As discussed thoroughly in previous analysis, a push through the resistance cluster (pink) to flip $7,300 to support would open up the path for Bitcoin price to reach $8,000.