Since Bitcoin (BTC) price rallied above $19,000 in 2017, crypto analysts have issued an amazingly wide range of price predictions on the date and value of the next all-time high or low.

Sometimes these predictions are rooted in deep fundamental and technical analysis, whereas other times they are simply nothing more than off-the-cuff estimates issued at whim.

The Black & Scholes valuation algorithm has been the basis for the pricing of options on traditional assets since the early 1970s, and remains widely used.

Although the Black & Scholes option pricing model tends to underestimate the odds of substantial movements, it does provide precise and conservative estimates.

Similar to weather forecasting, adding more than a couple of days to an estimate reduces its precision by a logarithmic proportion. One must also consider that the model has to predict a binary outcome because a $9,500 option will be deemed worthless if the expiry price is $9,499.

Pundits price predictions are often way off the mark

Many analysts tend to exaggerate their estimates to make a bold statement and attract media attention, or their predictions are based on various types of bias.

No one expects gold bugs like Peter Schiff to draw a bullish Bitcoin estimate, and the same can be said for expecting a bearish prediction from Stock-to-Flow model author PlanB.

The question investors should be asking is exactly how far off were those estimates compared to Bitcoin options pricing? Furthermore, should one even consider these analysts and pundits opinions?

Although the Black & Scholes options pricing model can be complicated, it’s usage is pretty straight forward. By informing the current BTC price, strike level, days until expiry, and annual volatility, the model will instantly provide the odds above and below a specific price.

Skipping the complex calculations, one can refer to Skew Analytics to find current probabilities for each expiry based on options pricing. 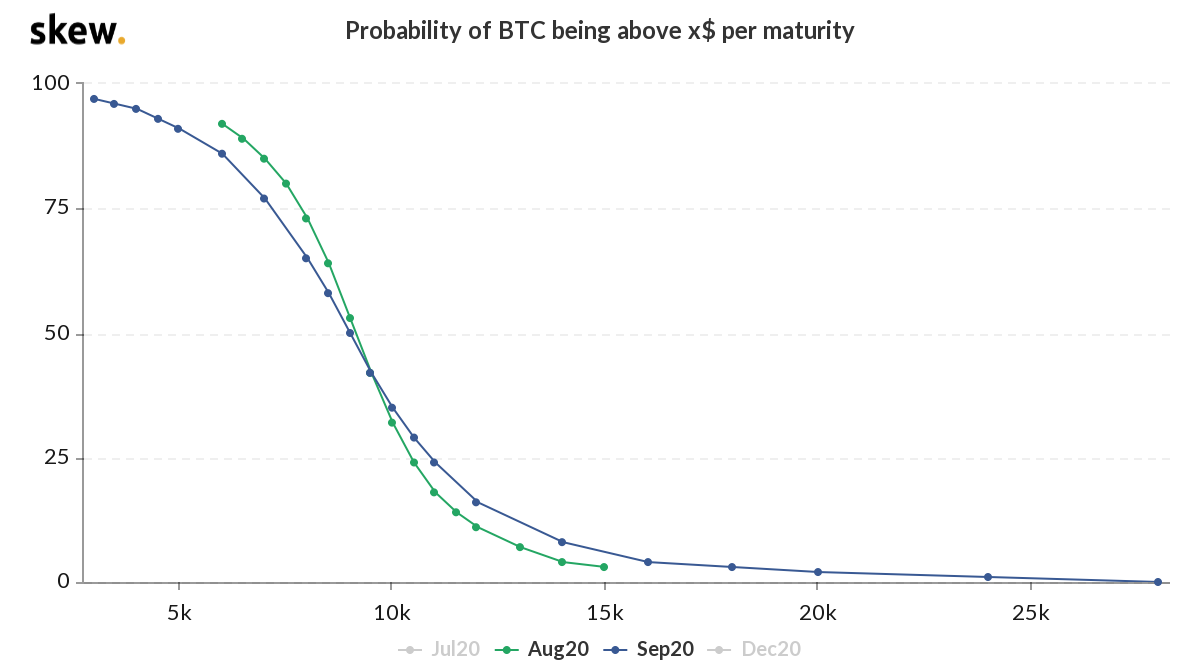 Most active option strikes expire on the last Friday of every month. As previously explained, those figures will seem conservative. Both August and September strikes signify a mere 50% probability that Bitcoin price will remain above $9,000.

A 50% odd should is effectively neutral, as the mathematical model states that odds above and below such target are pretty much the same.

By contrast, the probability for a $8,500 on the July expiry (just two weeks from now) sits at 76%. The model becomes more confident as we approach maturity, so one should not expect options to price 90% plus odds for contracts with more than two weeks left.

To assert whether analysts and pundits’ predictions fare better than options markets pricing, one needs to stack those odds against the Black & Scholes options model, which requires four basic inputs: current price, strike (prediction), days until expiry, and implied volatility.

The above chart depicts six predictions over a 100 day period, which will be individually tested against the options markets model.

Despite having said numerous times that he isn’t an active trader, Binance founder Changpeng Zhao often likes to publicize his predictions. In early November, CZ declared that BTC would hit $16K ‘soonish,’ so one should assume four months.

CZ missed the mark by 35% as Bitcoin failed to break $10,500 level within four months. This was not a lousy call, but rather way too optimistic as indicated by the Black & Scholes model.

Analyst Willy Woo reflected on the previous year cycle low of $3,100 and estimated that Bitcoin could drop 71% from its $12,800 high, reaching $4,500 before the next halving. It seemed rather unlikely at the time, but a six-month timeframe in cryptocurrency is a very long time.

Hats off to Willy Woo on this call as the March 13 infamous crash caused a brief test of the $4,000 level. Despite being correct, buying protection for such a long time frame costs substantial money. A $6K put option would have cost Woo $540 back then.

Notorious Bitcoin basher Peter Schiff spotted a head and shoulders pattern and issued a $1,000 prediction. Although no timeframe was set, based on such a pattern, a three-month time frame seems reasonable.

One doesn’t need to be a statistician to deem such predictions as unreasonable. According to the options model, a $5,000 target back would still have shown a limited 10.7% probability.

Peter could have remained bearish using a more reasonable goal, according to options markets at that time.

The 40-year market stalwart said that BTC had already hit its floor; hence investors waiting for a price dip to $6,000 have “missed” their opportunity. No timeline was mentioned, although a 3-month prediction would have pleased most investors.

In an interview with Yahoo! Finance, Fundstrat senior analyst Tom Lee suggested that Bitcoin’s technical achievements paved the way for 200% gains within six months, with halving acting as a catalyst.

With less than 20 days to fulfill such a prediction, it seems very unlikely to occur. At least buying a $23K call option would have cost $65, a bargain considering a $4,000 upside to Lee’s target.

The creator of the stock-to-flow model revealed his belief that Bitcoin would not return below $8,200. PlanB also mentioned that he was expecting levels above $10,000 near Bitcoin halving in May.

One might say PlanB got it 50% right, although the bold $10,000 prediction could have earned him good money using a butterfly spread strategy.

Options pricing provides guidance, but it isn’t an oracle

Black & Scholes can be a useful tool to understand how far a prediction might be from options pricing. What’s clear is that pundits seem to exaggerate their takes, which leads to huge misses and misinformation in the form of bad analysis being spread through major media outlets.

In some cases, the wild guesses do hit the mark. For example, Willy Woo and PlanB could certainly have profited by defying options model pricing, but generally it’s better to do your own research instead of following calls from ‘leading’ analysts.

Why Do the Winklevoss Brothers Believe Bitcoin Will Reach $500,000?