After a strong two week performance that saw Bitcoin (BTC) price rise from $7,700 to $9,200, the top crypto asset appears to be consolidating before making another attempt at $9,200. As this process takes place and Bitcoin’s dominance rate dropped slightly, many altcoins rallied with double-digit gains which brought many to test or even push above their 2-year long descending trendlines.

Most notably, the ETH/BTC pair pushed above its long-term downtrend, an occurrence covered in great detail by Cointelegraph contributor  Michaël van de Poppe. 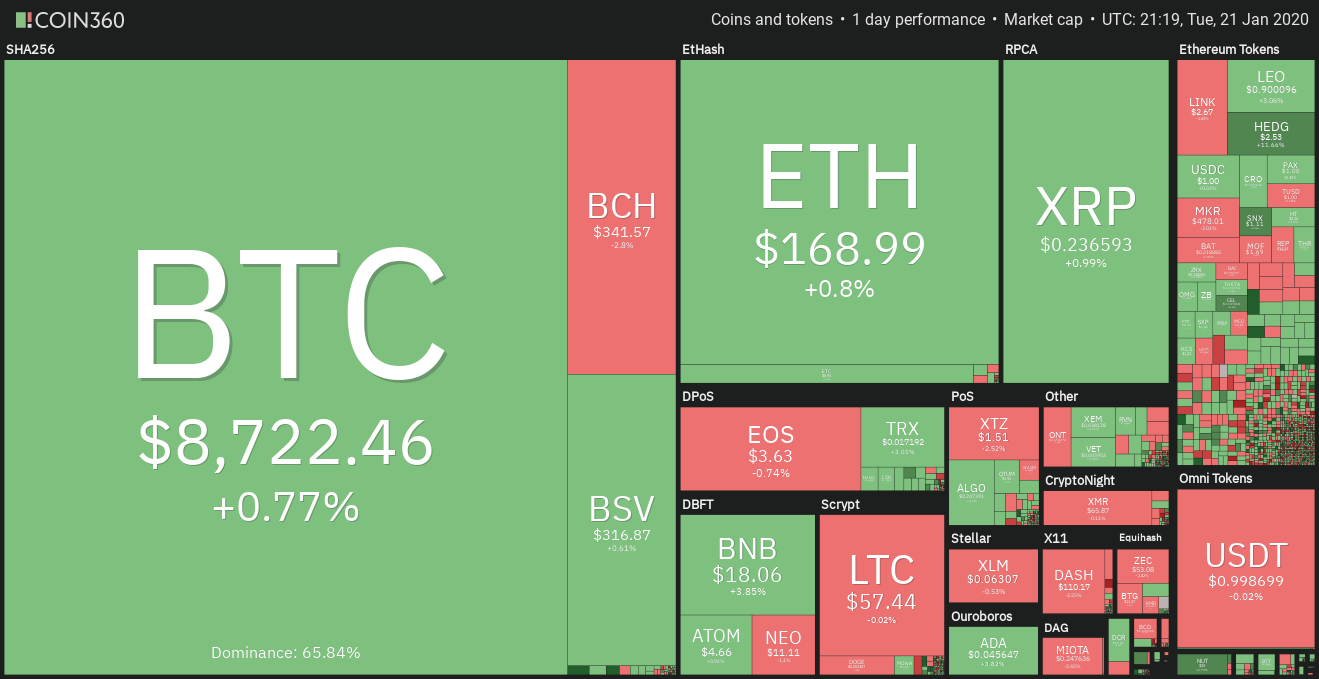 The strong rejection at $9,200 on Jan. 18 and following drop from the ascending wedge pattern briefly flipped traders’ sentiment to bearish and calls for a revisit to $8,000 and below the 200-day moving average (200) surfaced. Fortunately, for bulls, traders have done a good job defending the support zone at $8,470 and the shorter timeframe charts currently show Bitcoin (BTC) attempting to press above the moving average of the Bollinger Band indicator. 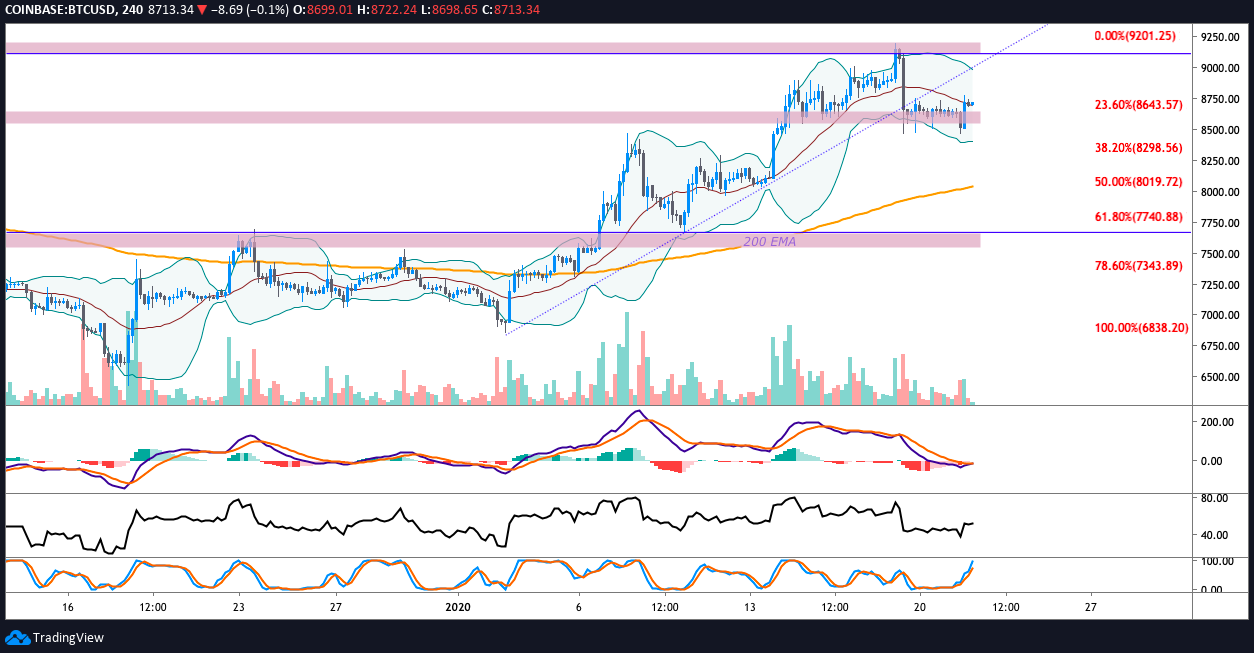 Since Jan. 19 the price has dropped to test the $8,475 five times and each time traders have bought into the dip in defense of the support which suggests traders believe Bitcoin’s current set up supports the possibility of another run to $9,000 over the short term.

At the moment, the price rides along with the moving average of the Bollinger Band indicator and the 4-hour moving average convergence divergence (MACD) and relative strength index (RSI) suggest that the bulls will attempt to push Bitcoin price to the upper Bollinger Band arm which is located at $8,983 and also lined up with the ascending trendline which BTC fell below on the Jan. 18 pullback.

Bitcoin’s trading volume also has tapered off, an occurrence that is typical before a sharp shift in price the MACD has converged with the signal line of the 4-hour timeframe which is a bullish signal.

Even if a high volume spike sends Bitcoin price back to $9,000, a more desirable move would be seeing the price push through $9,113 and hold for a 4-hour close. Setting a daily higher high above $9,200 would also restore momentum and show Bitcoin is ready for continuation to $9,600. 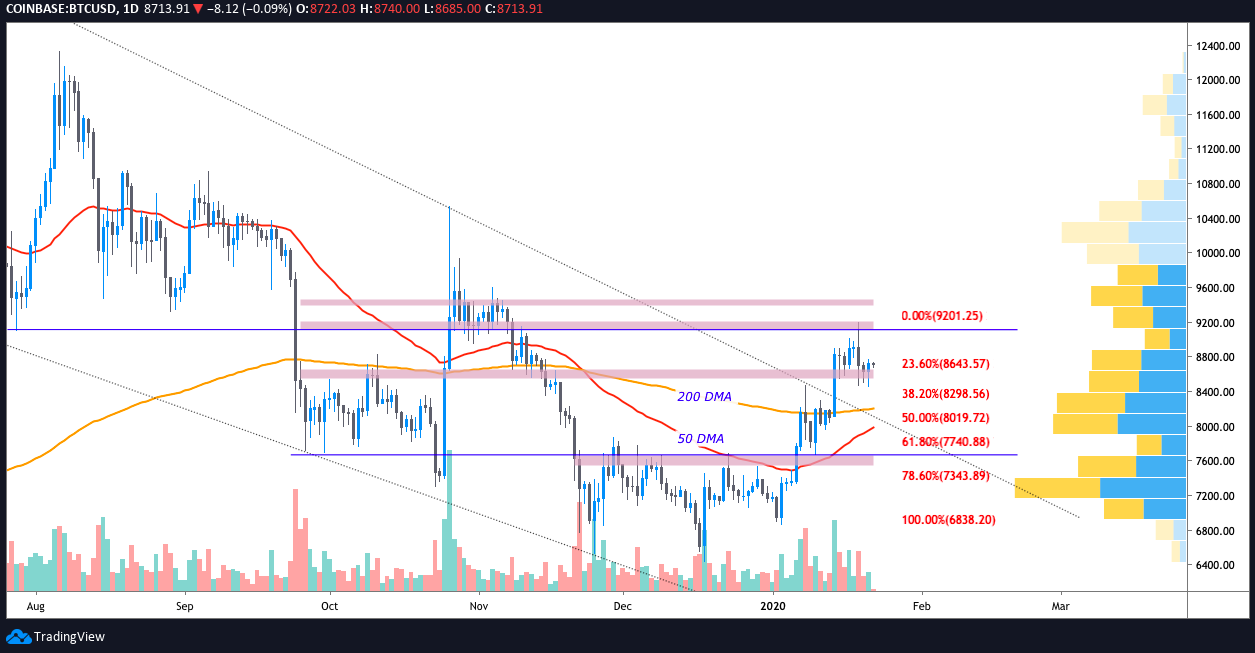 Currently, the volume profile visible range (VPVR) shows buying interest at all of the levels mentioned above, including $8,470. Further, the trader’s recent behavior of buying into the pullbacks of the last three days suggests a retest of lower supports will produce even strong bounces as buys who missed the strong rally of the past two weeks may see any price below $8,200 as an opportunity to open long positions.

As discussed earlier, a bullish outcome would involve Bitcoin price bolting above $9,133 and flipping $9,200 to support. Doing so would open the door for the digital asset to take out $9,600 and begin the push toward $10,000. $9,800 is likely to present significant resistance and traders will be tempted to take profits at this point, possibly resulting in a sharp pullback.

It is also worth remembering that the price has just broken out of a 7-month long downtrend and the weekly MACD is in the midst of a bull cross.

Thus, regardless of a strong rejection at $9,500 or $9,800 the current trend change is strong and many traders are targeting $11,500 as a target supported by the current market structure.

For the short-term, let’s observe to see if an inverse head and shoulders pattern shapes up with Bitcoin pushing above $9,200 to set a daily higher high.

The views and opinions expressed here are solely those of the author (@HorusHughes) and do not necessarily reflect the views of Cointelegraph. Every investment and trading move involves risk. You should conduct your own research when making a decision.

Opacity Partners with Rubic to Cut Down on Crypto Fees

PayPal Is Exploring Creating Its Own Stablecoin as Crypto Business Grows