It’s been an absurd day for Bitcoin. The asset is up in excess of 10% in the past 24 hours, surging higher as crucial resistances fall to buyers. With one of the best daily performances in months and an extremely impressive macro setup, investors around the world are taking notice of Bitcoin.

Multiple reports have indicated that the asset is going viral on Twitter, trending in at least the U.S. and Canada.

Bitcoin Trends on Twitter and Canada as Price Surges

Michael Goldstein, a prominent Bitcoin commentator and proponent, shared the image below on July 27th. It indicates that #Bitcoin, which comes with its own emoji thanks to Twitter CEO Jack Dorsey, is trending in the U.S. with 61,000 tweets in the past 24 hours. 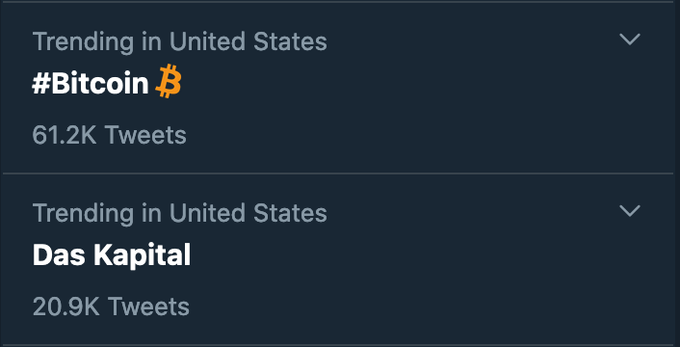 According to this own writer’s Twitter feed, BTC is also trending in Canada. The hashtag is currently the second-most popular trend on this writer’s feed.

Multiple reports from other Bitcoin and crypto community members around the world, including in Australia and in the U.K., has confirmed that the cryptocurrency is trending around the world.

As Bitcoin has begun to trend on Twitter, the cryptocurrency has also seen a strong uptick in interest from Google users. Google Trends suggests that searches for the term “Bitcoin” or any related cryptocurrency term are reaching multi-week and multi-month highs.

An Uptick in Mainstream Coverage

Bitcoin trending on Twitter comes as the asset has seen an increase in coverage by mainstream media outlets.

Financial news outlets such as Fortune, Bloomberg, MarketWatch, CNBC, and Kitco have heavily covered the asset in the past 24 hours. The asset, though, has not yet seen any features on television as it did throughout 2017’s parabolic bull run and the 2018 bear market.

Mainstream Investors Are Talking About BTC

Through all this, mainstream investors and analysts, along with institutions, have begun to discuss the cryptocurrency once again.

As reported by NewsBTC previously, analysts at Citibank, a global banking giant, purportedly released a research note suggesting Bitcoin will surge to $20,000, then potentially to $120,000.

89% Worry What Happens to Their Crypto After They Die