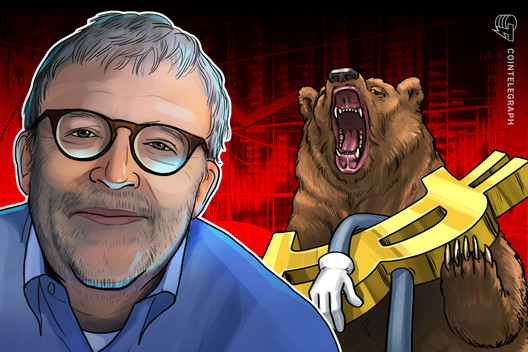 Bitcoin dipped below $4000 today, for the first time since the depths of crypto winter — and one veteran market analyst believes it could have even further to fall.

Crypto markets have been in freefall following the announcement of travel bans yesterday between the U.S. and Europe, and ongoing volatility in all financial markets.

Veteran trader Peter Brandt — who is famous for correctly predicting the market crash from the all time high — today tweeted an answer that no one wanted to hear in response to an inquiry about the new ‘bottom’ for Bitcoin due to coronavirus.

Brandt said that if he looks at the Bitcoin chart “without bias” the new bottom is potentially “sub-$1,000”. That’s almost 80% below the current price, which is just under $5000,

If I interpret the chart without bias, I would say sub $1,000

Brandt is more bullish than bearish

The one time commodities analyst is no crypto skeptic — in fact, he’s often more bullish than bearish about Bitcoin, and believes that parabolic increases in the Bitcoin chart could see it hit $140,000.

Brandt also correctly tipped a price spike during the depths of crypto winter shortly before the Bitcoin price doubled in mid-July.

Blockchain conferences worldwide have also suffered the effects of COVID-19. Italy’s upcoming EDCON has been cancelled, and no new dates have been announced for South Korea’s Nitron Summit 2020. Meanwhile, the second firm to launch Bitcoin Futures in the U.S., CME Group, announced it would close the trading floor today (March 13), although trading will continue online as normal.