In the wake of “Black Thursday,” it seemed clear to some that Bitcoin was dead: hundreds of millions of dollars worth of BitMEX positions were liquidated, the crypto’s market liquidity dried up (accentuated by the 50% drop in a day), and Crypto Twitter briefly became a ghost town.

But, as I recently cataloged in a Twitter thread, citing evidence from a number of sources, data is showing that both institutional and retail demand for cryptocurrencies, especially Bitcoin, is growing at a rapid clip.

All data is pointing towards both retail and institutional demand for Bitcoin exploding.

This comes as BTC is about to see a 50% inflation cut and as monetary policy is more easy than ever — a perfect storm.

Exchanges have all seen a strong uptick in buy-side Bitcoin pressure over the past few weeks.

According to IG.com, a U.K.-based derivatives provider, 81% of the traders of its Bitcoin contract are long on the market, while 70% of trading Coinbase users over the past 24 hours have increased their exposure to BTC.

To add to this, Decrypt reported that Kraken, OKEx, Bitfinex, Paxful, and Luno have seen user sign-ups increase dramatically, some by upwards of 300%.

And to top it all off, “Buy Bitcoin” and “Bitcoin halving” have both seen a strong uptick in Google search volume recently, only corroborating the trend of retail investors starting to dabble in crypto yet again.

The abovementioned are some of the many data-based evidence indicating that retail investors are demanding Bitcoin, even though a 50% crash to $3,800 was sustained last month.

But that’s not all.

Institutions Are Getting Their Feet Wet

On the institutional side of things, Fidelity Digital Assets — the crypto services division of Wall Street giant Fidelity Investments, a firm with trillions under management — has confirmed it has seen an uptick in interest.

Speaking to Frank Chaparro of The Block, a spokeswoman for the firm said that:

“From a trading perspective, we continue to onboard new clients every month and are seeing significant pipeline growth. […] And in recent weeks, we’ve seen more momentum across our business.” 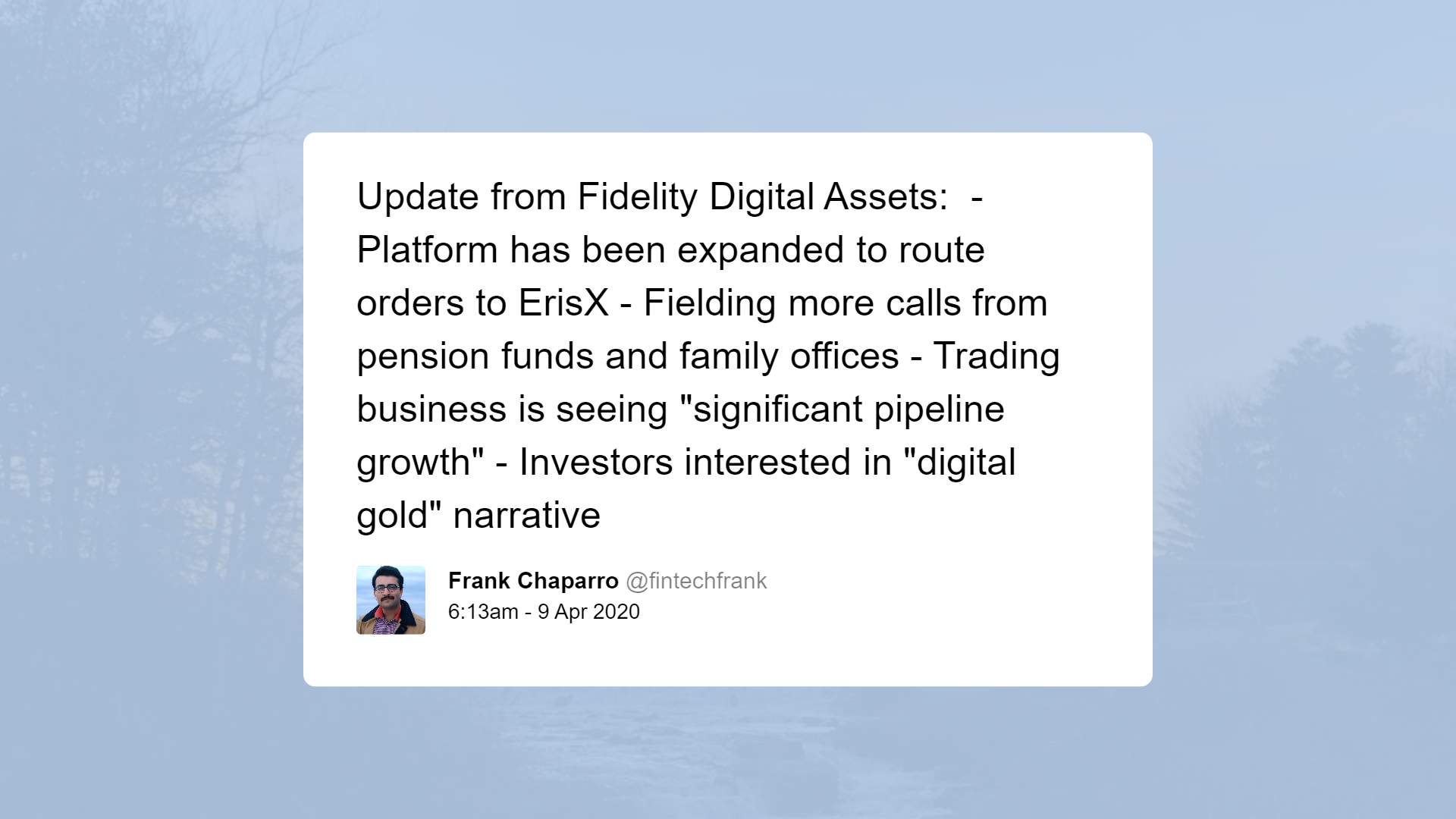 It’s All About the Bitcoin Halving

While it isn’t clear exactly how much the recent demand increase has affected BTC’s price, the logic goes that the increased demand we’re seeing at current will soon translate to a booming market.

In around 35 days’ time, according to most estimates, Bitcoin will see its next block reward halving, whereas the 12.5 coin reward minted each back will drop to 6.25. This means BTC’s inflation rate will be cut by 50%, decreasing the number of coins injected into the system by miners.

Related Reading: Bitcoin Will Erupt to $20,000 By Year End: Why BitMEX CEO Doubled Down

Simple supply-demand dynamics suggest that with decreasing supply and increasing demand, the price of a market should rise. Bitcoin should be no exception to this rule.

Indeed, PlanB, a pseudonymous quantitative analyst in the crypto space, found that Bitcoin’s scarcity is correlated with the network value of the asset. The model that the analyst created to signify this relationship predicts that he fair value of the Bitcoin network will rise to $1 trillion to $2 trillion, which is about $55,000 to $110,000 per coin, after the halving.