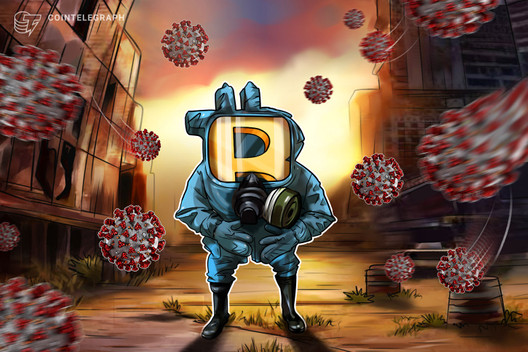 The recent coronavirus outbreak has far-reaching consequences beyond the spread of the disease and efforts to quarantine it. Recently, we’ve experienced one of the most severe stock market crashes in modern times: On March 9, 2020, the Dow Jones Industrial Average recorded a drop of -7.8%, which happened to be its worst single-day loss ever. However, on Thursday, March 12, 2020, the Dow then recorded the fifth-largest drop in modern history based on percentage points by a staggering amount of almost 10%. Unfortunately, the losses did not stop there. Four days later, on March 16, the Dow hit a new record of almost 13%. Since the COVID-19 outbreak became an international issue, it is unsurprising that equity markets worldwide have experienced severe losses.

In acknowledging the ability of Bitcoin (BTC) to hedge stock market risk, some economists and researchers refer to Bitcoin as “digital gold.” Some studies argue that Bitcoin is exposed to tail-risk only within the crypto markets, but it is not exposed to tail-risk with respect to other asset markets, such as equity markets or gold. However, the recent COVID-19 outbreak is a tail-risk event — or what Nassim Taleb refers to as a so-called “Black Swan” because it is an outlier — and it carries an extreme and consequential impact.

Related: Is Bitcoin a Store of Value? Experts on BTC as Digital Gold

Surprisingly, the study found that Bitcoin performed poorly in hedging this Black Swan event. Specifically, using a 20-day rolling-sample window to estimate the empirical distribution of the realized dynamic correlation, the realized correlation between Bitcoin and U.S. stocks was -0.0208 in the period from April 17, 2015, to October 31, 2019, which is used as a before-the-event sample in this study. Confirming earlier studies, the correlation was insignificant.

As the World Health Organization characterized COVID-19 as a pandemic on March 11, 2020, the study employed the sample from March 12, 2020, to March 18, 2020, as an after-the-event period. Interestingly, the correlation between Bitcoin and U.S. stocks was 0.6353 in the after-the-event sample period and statistically significant. Controlling for gold confirms this result.

While the study shows that gold, indeed, lived up to its expectation to serve as a safe haven in times of troubles, Bitcoin turned out to be a curse rather than “digital gold.”

To sum up, the study employed the outbreak of the pandemic as a quasi-experimental design to investigate the hedging abilities of Bitcoin — which has been referred to as “digital gold” to highlight its renowned abilities to hedge risk investment for various financial asset classes in particular stocks. The study’s findings suggest that Bitcoin performed poorly in hedging this extraordinary tail risk in U.S. stocks. Unlike earlier research, the findings suggest that Bitcoin is indeed exposed to (extraordinary) tail risks in other asset classes such as stocks.