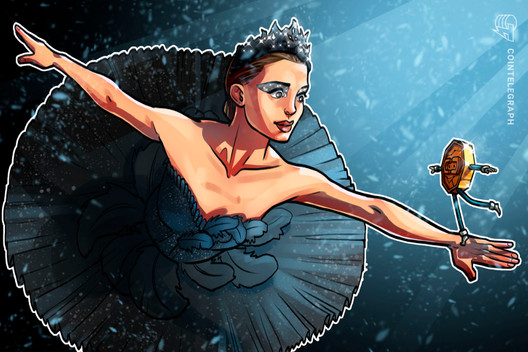 In the past three decades, the world has been witness to three extraordinary “black swan” events that served as structural crossroads for both societies and economies: the 9/11 terror attacks, the 2008 global financial crisis, and the COVID-19 pandemic.

Nearly two decades ago, 9/11 unleashed brazen new escalations of state powers over individuals and monetary controls, all in the name of security from terrorism led by the United States and still reverberating around the globe. The 2008 economic meltdown caused by the U.S. housing crisis illuminated the fundamental economic inequality issues that fomented movements like “We Are the 99%” and the “Arab Spring,” and almost directly birthed Bitcoin (BTC) and peer-to-peer cryptocurrencies. The ultimate social and economic outcomes from the COVID-19 crisis remain to be seen, but their impact is already powerfully felt and may very well prove to be the most transformational of all.

Each of these black swan events has spurred repercussions both in the growth of authoritarianism and state control, with a backlash of popular movements centered on individual empowerment in response.

Centralized governments work from their old playbook of centralized solutions, as they must. While few national governments are proving to be up to the task of implementing national policies on testing and contact tracing, evidence-based approaches to combating the health crisis, or using their nation’s industrial capacity to rapidly address the need for lifesaving equipment, most governments at least have the power of monetary policy to build some form of bridge and safety net between the 11-year bull run economy of the 2010s to an entirely notional “bounce back” economy of the 2020s, which is likely to result in long-term devaluation of national currencies and an opening for alternative currencies like Bitcoin to gain hold among the populace.

Money printers go “brrr,” but value fades as they run out of ink

National governments have little choice but to continue economic stimulus spending since the alternative is financial contagion into ever-deepening avenues of their economies. The real economy cannot return for any length of time until there is both an effective treatment and a preventative vaccine for COVID-19.

The stagnating economy risks losing key pillars permanently unless some form of economic stimulus is used to maintain workers and businesses until societies can reopen. While there will be many warnings about the long-term harm in printing swathes of new money, these will be less immediate than the risks of not providing stimulus and are likely to go unheeded.

Hope, cognitive dissonance and political expediency will cause these economic stimulus lifelines to be implemented as a series of short-term measures rather than as coordinated and evidence-based policies. Politicians have a long history of addressing immediate problems over distant ones, especially in election years.

Nowhere is that truer than in the United States, where over $2.4 trillion in COVID-19 relief (more than the total U.S. national debt in 1987) has so far been handed out for standard corporate bailouts, small business assistance and relief for out-of-work citizens in the lower and middle classes, who will struggle to make it through the summer on the initial stimulus payment and a patchwork of federal and state unemployment benefits. These are ultimately very small and temporary injections (a one-time $1,200 check for individual U.S. citizen taxpayers and eight weeks of salary and lease expenses for the small businesses fortunate enough to receive the SBA stimulus forgivable loans under the PPP). These are narrowly applied and of limited duration, with unclear rules and rushed implementation.

Further, there has not yet been meaningful stimulus or bailouts to U.S. states and cities, residential and commercial real estate, insurance companies or pension funds, although the needs for these will be enormous, structural and highly visible, lasting through the several months of the pandemic and beyond.

It is reasonable to expect that a minimum of four times the current expenditure to $10 trillion in overall stimulus (more than the total U.S. national debt just before the 2008 Great Recession) from the U.S. alone will be spent before the pandemic is controlled.

Most countries will find themselves in similar positions, but without the economic scale or favorable monetary position to print the excessive amounts enjoyed by the U.S. The best hope of fiscal conservatives will be that stimulus spending will go into infrastructure projects that will at least provide long-term economic benefits to offset the economic harms of massive inflation of the world’s money supply.

Moreover, as the “brrr” of the money printing machine drones on, the U.S. dollar and other global bedrock currencies will find themselves between an economic Scylla and Charybdis where too much stimulus is nowhere near enough.

As the U.S. administration further abdicates its former leadership role in world and economic affairs and isolates itself from its major trading partners, even the long-esteemed dollar loses its allure as a de facto world settlement currency without revealing an heir apparent. Its potential successors, the euro, the British pound and renminbi all still have the same deficiencies that have prevented them from previously overtaking the U.S. dollar and will almost certainly share the same inflationary woes as the greenback.

Thus, an unexpected and unprecedented opportunity for alternative currencies to gain global relevance will emerge — especially for any that have strong, permanent controls on inflation. This opportunity for cryptocurrencies to ascend could, perhaps, be the blackest of all swans.

Strength in the constancy of numbers

One outcome of the 2008 global economic collapse (in retrospect, it seems almost quaint to use such terms compared to the level we are already seeing in the COVID-19 era) was the birth of Bitcoin, a currency protocol issued by no world government and therefore not subject to the whims of any nation’s politics.

Bitcoin’s primary strength — its own immutable monetary policy, based purely on mathematics — is now more apparent than ever. The Bitcoin supply and emission rates remain unaltered throughout crises and the political solutions they unleash. Other cryptocurrencies that can also pair this programmatic inflation control with a meaningful level of adoption may also flourish for this same reason.

The new economic reality created by the excessive currency inflation necessitated by government stimulus will present two strong forces for the price of Bitcoin and other cryptocurrencies being seen as having real value and limited inflation. On the one side, people will become more aware of the forces of inflation and debasement of government-issued, or fiat, currency. With the simultaneous reduction of actual economic activity and increase of money supply, many countries will experience severe inflation or even hyperinflation. This will drive many people toward high quality cryptocurrencies like Bitcoin. This may ultimately ignite a retail FOMO condition far exceeding 2017’s bull market for cryptocurrencies.

The opposite force, however, will be a strong concern for individual finances which will see many people going to cash, despite inflationary concerns, as people become more worried about meeting daily expenses than maximizing long-term financial returns. This force is equally real.

Already emerging is the very real fear for many who have made the hard slog up the economic staircase that they will suddenly fall back down the gaping elevator shaft. For the billions around the world living paycheck to paycheck (or worse, hand to mouth) their long-term portfolio value is not a concern they can afford or even imagine. It is worth remembering that the 2017 cryptocurrency bull market came as a product of a robust economy where many had discretionary investment funds to chase the promise of ever-better returns from crypto. You can’t eat Bitcoin, Ether (ETH) or gold, and people spending all their money on rent and potatoes will have few remaining funds to help pump crypto prices.

Which way will this ultimately break? One reality of this volatile and uncertain economy is that rather than one future or another materializing, we more often see both futures emerge with wild swings between polar extremes over short periods. This is likely to be an outcome of financial planning set against a stage with no roadmap or historical precedent and contending with both bifurcated political “realities” and fake news. Expect to see volatile fluctuations between these states like Schrodinger’s economy of currency prices that exhibit multiple possible realities in short spans of time.

In the end, however, the more government stimulus protects the real economic pillars and gives people confidence in the future, the more it will support the liquidity inflows to Bitcoin and other low-inflation, high-usage cryptocurrencies.

If governments are successful in using stimulus programs to alleviate popular fears of immediate hunger and homelessness across broad sections of the economy, these same stimulus policies will necessarily increase inflationary concerns and make a better case for crypto over fiat even as they allow people the freedom to use some of these stimulus proceeds to buy into crypto assets.

In other words, if governments are able to keep the global economy alive, more of it will trend toward Bitcoin and other non-inflationary cryptocurrencies — especially those that provide users with meaningful functionality beyond simply being a store of value. Those blockchain projects that can address real problems exposed by the economic and governance problems we face will be better placed to receive people’s faith over failing fiat currencies.

Douglas Horn is the white paper author and chief architect of the Telos blockchain. He is the founder and CEO of GoodBlock, a decentralized app development company, founded In 2015, which creates cutting-edge protocols, DApps, tools and games. Prior to blockchain, Douglas worked in the entertainment and gaming industries. He has written and directed award-winning feature films and designed and produced mass-market games for Disney, Pokémon, Warner Bros., and other brands. He has also worked as a creative for a number of technology companies.

Crypto media runs with the bulls as new entrants compete against...