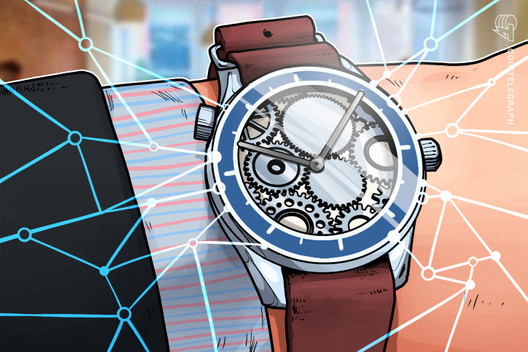 Breitling, which was founded in 1884, claims to be the first watchmaker to issue watches with a warranty program certified using blockchain technology. Each watch will be sold with its own e-warranty card. Scanning these cards will allow owners to download an encrypted wallet that securely stores the products’ digital “passport.”

The passport contains data pertaining to that individual watch, including its serial number and a timestamp indicating the date from which the warranty is activated.

“Only accessible by the owner through the wallet, this passport includes a transfer feature that enables the owner to prove the authenticity of the watch, and his or her legal ownership,” Breitling’s website states.

If an owner is to sell their Top Time watch, only the transfer of the digital passport is needed to authenticate the new ownership of the timepiece. Emmanuelle Collet, Arianne’s co-founder and CMO, stated:

“We are proud to be able to offer an augmented ownership experience to Breitling’s Top Time clients through an enhanced warranty program.”

Arianne claims to have pioneered the digital identification of watches, describing its June 2019 partnership with Vacheron as producing the first-ever watches uniquely identified using blockchain technology.

In recent months, Arianee has sought to find applications for blockchain technology within the luxury fashion industry — with the non-profit’s CEO and co-founder Perre-Nicolas Hurstel speaking at fashion conferences hosted by Premiere Vision Paris and Vogue in Paris during February 2020.

Blockchain technology is being used for digital identity certification in an increasing number of mainstream industries.

At the end of February, South Korea’s Nonghyup bank rolled out a “mobile employee ID” system using distributed ledger technology. This ID technology was developed in partnership with tech giant, Samsung and the system will be implemented through the country’s largest wireless carrier, SK Telecom.

On March 25, the United Arab Emirates’ (UAE) Ministry of Community Development (MOCD) revealed that it will rely on blockchain-based digital identity authentication to issue documents amid MOCD office closures resulting from the COVID-19 lockdown.