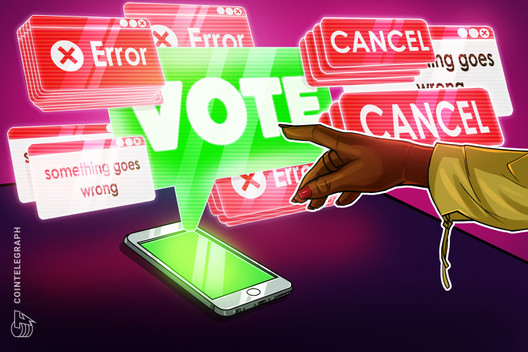 According to a report released on Feb. 5, a mobile software application that was devised to help calculate the total number of votes in the Iowa Democratic caucus reportedly malfunctioned, resulting in the Democratic Party having to delay its public reporting of last Monday’s results. It was also revealed that a coding issue with the software resulted in the app relaying results that were either partially incorrect or unreliable.

The application under scrutiny was designed by a relatively unknown firm called Shadow Inc. The startup was founded by Gerard Niemira and Krista Davis, who played a major role in promoting Hillary Clinton’s 2016 presidential campaign. In January 2019, the company was bought out by Acronym, a pro-Democrat nonprofit founded in 2017.

It is worth mentioning that the CEO of Acronym is Tara McGowan, a former journalist and digital producer who was closely tied with former President Barack Obama during his 2012 re-election campaign. Additionally, a number of other high-profile Democrats also seem to be closely linked with the app, including David Plouffe, one of Obama’s close aides who worked with him during his second tenure.

Lastly, McGowan is married to Michael Halle, an official senior strategist working for Pete Buttigieg’s presidential campaign, who incidentally went on to declare himself victorious after the Iowa caucuses even before the final results were released — thus prompting conspiracy theories of foul play.

Following the incident, a spokesperson for Voatz, one of the world’s leading blockchain voting firms, took to the internet to release a blog claiming that the app used in the Iowa Democratic caucuses did not make use of mobile voting technology. An excerpt of the statement reads:

“We’ve never previously heard of the technology nor the company behind it. […] Using an app to tabulate in-person caucus votes is not mobile voting.”

Mobile voting platforms distance themselves from the Iowa debacle

To gain a better understanding of this entire issue, Cointelegraph reached out to Pete Martin, the CEO of Votem Corp., a mobile voting system designed to securely cast votes in elections across the globe. In his view, the Iowa debacle wasn’t really linked with mobile voting, since it was largely a private affair — a sentiment that is also shared by another voting solution provider, Voatz.

Related: Blockchain Voting Systems — Can Democracy Rely on Them?

Martin then alluded to the various paper-based, in-person polling scandals that quite conveniently were seemingly ignored by a lot of political experts — referring in particular to the election scandals that took place in Florida back in 2000 and then again in 2018. On the subject, Martin added:

“We believe that mobile voting enhances the voting experience, makes it more accessible at potentially less cost to taxpayers so that voters can vote more often on more issues and more conveniently. Young people (under 30) will make up the majority of the electorate in the U.S. in a few years and this is how they want to vote; not in person, and not through the mail.”

In Martin’s opinion, the biggest challenge with blockchain and mobile voting systems is the fear of change, entrenched interests of various big-name players in maintaining the current status quo, and the very real threat of hacking and interference. However, he believes that mobile technology has proven to positively affect virtually every other industry giving greater access, convenience and lower costs to people all over the globe.

Lastly, regarding blockchain’s overall utility, especially in relation to large-scale voting purposes, people need to understand that the technology is still just a decade old and that it will take some time for startups to demonstrate blockchain’s ability to make elections more convenient, secure and verifiable.

Blockchain voting is here to stay

Recently, many political commentators and media analysts have been speaking out against mobile- and blockchain-based voting technology. However, Rachel Livingston of Tusk Philanthropies — an organization working to advance the use of advanced mobile voting technologies — told Cointelegraph that these novel ballot systems are here to stay, especially since they are already being used by a number of states across the United States. On the subject, she pointed out:

“I don’t think it’s too early to judge the overall utility of mobile voting as we have now used Voatz in West Virginia, Denver, UT County, Umatilla & Jackson County, Oregon and Pierce County, WA. All these elections have completed and through audits (some are still in process) the tabulation of the results came back 100% accurate.”

Livingston also provided Cointelegraph with some data on the matter:

As mentioned earlier, ballot voting has been at the center of a number of prominent election scandals in the past. For example, during the 2004 U.S. general election, a number of concerns were raised regarding the voting processes used to determine the winner, resulting in several experts believing that the final vote tally in itself was incorrect.

Blockchain and mobile voting systems attempt to serve the diverse needs of constituents by providing them with accessible and convenient ways to vote irrespective of where they may be during the time of election. Moreover, they allow users to check and see if their vote was counted without them having to compromise on their privacy. For example, most voting platforms provide their users with a high degree of verifiability as well as the option to independently confirm the vote of each participant in real time.

When asked about the similarities shared between the Shadow Inc. app and other popular voting platforms such as Votem, SecureVote, Scytl and Voatz, Martin stated, “We don’t know very much about the Shadow app other than what we have read, but our understanding is that it wasn’t truly mobile, nor is it blockchain-based.”

The masses want an alternative

A quick look at the U.S. voter turnout in recent years shows us that fewer people are participating in the country’s electoral process with each successive cycle. For example, the total turnout in the 2016 presidential race dipped to 55% of voting-age citizens — one of the lowest tallies since the 1996 elections, when only 53.5% showed up.

Although there could be many factors to explain this decline, it seems as though many blockchain platforms are ready to tackle the issues surrounding trust, verifiability and security that exist in relation to the various democratic processes that seem to be in place today all over the world. For example, Voatz claims to be working in conjunction with the Department of Homeland Security as well as the Cybersecurity and Infrastructure Security Agency to test the efficacy of its security infrastructure on a routine basis.

Related: Electronic Voting With Blockchain: An Experience From Naples, Italy

Also, it appears as though the blockchain voting industry has been gaining a lot of prominence over the last couple of years, with a number of politicians conceding that the technology does indeed have the potential to increase the transparency aspect of any election process, as it helps establish a record base that is immutable in nature.

For example, back in August 2019, Andrew Yang — a pro-crypto presidential hopeful from the Democratic Party — stated in an interview that if he were to come into power in 2020, he would implement blockchain-based mobile voting protocols to help increase voter turnout as well as to restore the public’s trust in America’s electoral process. It has also been reported that the state of Virginia is currently considering making use of this technology to streamline its elections.

Last but not least, while most mobile voting systems prefer to make use of blockchain technology, there are platforms like Democracy Live’s OmniBallot that employ Amazon Web Services’ Object Lock to facilitate its native ballot collection operations. To be a bit more specific, AWS is NIST-compliant and has even been certified by FedRamp, a government program that provides a standardized approach to security assessment, authorization and continuous monitoring for cloud services.

Trump Calling For Even a Bigger Rate Cut Benefits Bitcoin For...

Price of Art Tied To Bitcoin