Decentralized finance is all about cutting out traditional financial intermediaries such as banks. Through the use of blockchain technology, DeFi platforms allow individuals to generate money against their own assets, becoming their own bank, as it were.

As an exciting new business paradigm, the DeFi sector has been warming up for some time. But during this past week, it got downright hot, and the current euphoria has some worried that a financial bubble may be forming reminiscent of the initial coin offering bubble of late 2017. Here are three events being cited:

Exhibit A: Compound Governance Token (COMP), the governance token for DeFi protocol Compound, rose in value from $64 on June 18 to $352 on June 21 following the launch of the ERC-20 altcoin on United States exchange Coinbase Pro. It eventually soared as high as $427 on Coinbase Pro before settling down — somewhat — at $255 on June 27 — but still up 298% compared with the price from June 18. 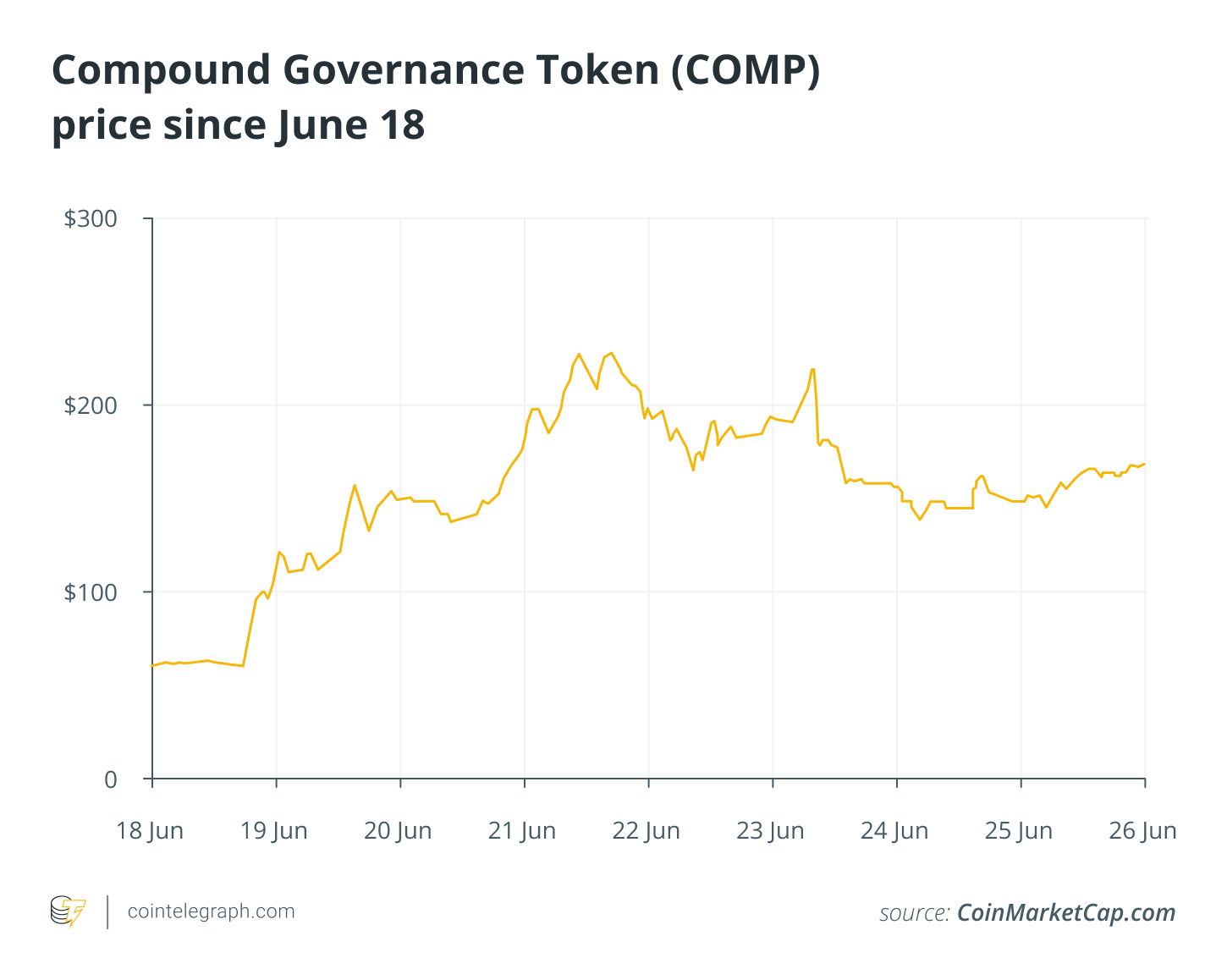 Exhibit B: On June 23, decentralized cryptocurrency exchange Balancer announced that its protocol governance token, BAL, was live on the Ethereum mainnet. Within 12 hours, BAL’s price jumped from $6.65 to $22.28.

Exhibit C: The total value of U.S. dollars locked in the DeFi industry sector over the past 30 days has increased by 80%. Compound’s share of total value locked was 38% as of June 26. 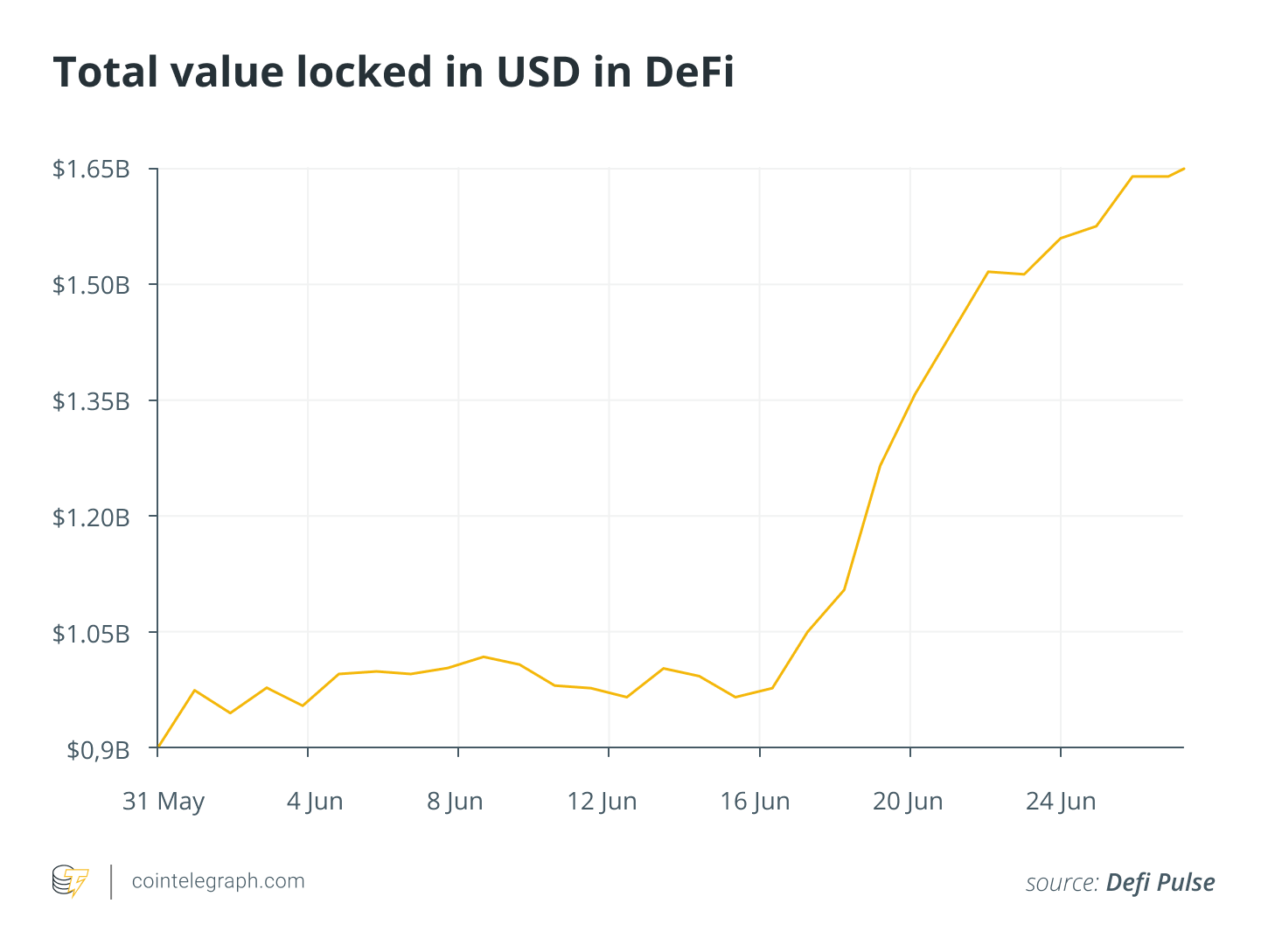 The recent turn of events clearly had Sasha Ivanov, the founder and CEO of the Waves Association, worried. “Future inevitable volatility and price crashes can severely harm DeFi mass adoption perspectives, which would be very bright otherwise,” he said.

So, it seems reasonable to ask: Is the DeFi sector approaching “bubble” territory? This isn’t always easy to determine. As Mati Greenspan, the founder of Quantum Economics, told Cointelegraph: “Bubbles often occur in financial markets, but the thing is: when you’re in one, it’s very difficult to tell if it’s about to pop or just get bigger.”

“It seems like it is undergoing some kind of surge in price akin to the speculative bubble in Bitcoin around 2013,” Jeremy Cheah, an associate professor at the business school of Nottingham Trent University in the United Kingdom, informed Cointelegraph. He wasn’t particularly alarmed though, adding: “Blockchain is here to stay. Short-run disruptions are to be expected, but its trend is upward given the benefits of blockchain.”

Campbell Harvey, a professor of international business at Duke University, explained to Cointelegraph that what is happening now in DeFi is different than the 2017 speculative craze in Bitcoin (BTC) and other cryptocurrencies — i.e., the so-called “ICO bubble” — in which “bandwagon investors were buying because the price was increasing.” Something more substantial is happening here, according to him:

“DeFi is poised to disrupt traditional borrowing and lending/investing which is an existing market that is massive in size. It is reasonable to expect that DeFi will cannibalize a good deal of the tangible, measurable market and the two questions are: how much of a share and how long will it take?”

Just because the total value locked in DeFi has increased by 80% in the past 30 days does not mean it is a bubble, added Harvey. “Indeed, it is not unusual to see growth like this in the startup space when a product idea catches on.”

Being paid to take out a loan?

Compound’s platform makes money on the spread between deposits and loans — i.e., savings accounts and borrowing accounts — like a bank does, but some users have reportedly “managed to find ways to exploit the system” to obtain COMP tokens that make continued user cycles of borrowing and lending profitable — despite a negative net interest.

As explained by the video’s host, Michael Gu, a user can be “literally […] paid to take out, to borrow out a loan.” This doesn’t work in any traditional banking context. It only works now “because the speculation on COMP is so high, and the value of COMP tokens is also through the roof.” Greenspan further explained this gaming process in a June 22 post on the website Bitcoin Market Journal: “Many users are then taking the USDT that they’ve borrowed, converting it to USDC, and then lending it back to the platform in order to earn even more COMP, which might explain why the system’s smart contracts now have $600 million in them.” This doesn’t make much sense to Greenspan, as he told Cointelegraph:

“Borrowing one digital asset using another as collateral is a rather funky use case. Unfortunately it seems to be a theme among DeFi projects, but if you have one and want another, why not just swap them outright? If the purpose of the transaction is just to get the additional COMP, then we’re back into the realm of magical internet money.”

There is some danger in all this, acknowledged Duke University’s Harvey, especially if utility tokens rise beyond their reasonable fundamental value because investors keep buying, not wanting to miss out on the next big thing. But there are two key differences between this situation and the ICO bubble of 2017, as he shared with Cointelegraph:

“First, investors know a lot more about the cryptocurrency space than they did in December 2017. Second, DeFi has already demonstrated ‘Proof of Concept,’ and the market it is targeting is vast. In December 2017, Bitcoin was being treated purely as a speculative asset.”

Waves CEO Ivanov agreed that “DeFi products are more sophisticated in nature than simple ICO tokens, which probably will limit the influx of non-qualified investors.” Additionally, Ruaridh O’Donnell, the co-founder and director of information systems of Kava — a DeFi lending platform — told Cointelegraph that it is wrong to call what is happening a speculative bubble, as DeFi firms such as Compound are developing new incentive programs to drive user adoption. He clarified for Cointelegraph:

“Much like how Uber, AirBnb, and other tech companies have subsidized the initial supply and demand side of their platforms, we are now seeing decentralized protocols like Kava and Compound do the same to bootstrap early adoption until a sufficient network effect is built.”

Token assets such as COMP are seeing a great amount of speculation due to the growth of their platforms, O’Donnell added, which can cause a localized bubble for COMP in the markets. But this is different from a general market bubble.

On the issue of volatility, Giuseppe Ateniese, a professor at the Stevens Institute of Technology, told Cointelegraph that he can name “hundreds of companies whose stock price behaves with the same volatility [as COMP], particularly during the first days on the market.” The critical difference here is that the assets are digital. It isn’t like a traditional car loan, where if the borrower defaults, the bank goes after the car seeking repossession. Ateniese continued:

“With DeFi, assets are digital and locked/committed through smart contracts. If done correctly (and this is still a big IF), there is no or little risk for creditors. If I don’t pay the loan back, the digital asset that I used as collateral is taken, and there is nothing I can do about it.”

This is the reason the “interests” being paid on DeFi platforms such as Compound are so high, in Ateniese’s view. For example, if one deposits the stablecoin Tether (USDT) with Compound this week, a 6.75% annualized rate in interest will be earned — at a time when the federal discount rate is 0.25%. “The best part of all is that anyone can be a creditor under these terms. Banks are warned,” according to Ateniese.

“I’m more optimistic about DeFi” than some of the more recent naysayers, Ateniese told Cointelegraph. “I think it’s a game-changer.” As he said recently, “With decentralized finance, there’s no human in the loop, no server, no organization. There’s no bias. […] Once the code has been analyzed and set in stone, it runs, and that’s it. You can rely on it almost 100 percent.”

O’Donnell added to this by saying that “recent events further galvanize [belief] that DeFi is a true use case for crypto.” His firm remains very bullish on DeFi, and he expects the industry will grow further as it opens up to non-Ethereum assets such as Bitcoin, Ripple (XRP) and Binance Coin (BNB).

Meanwhile, the DeFi sector’s market capitalization stands at just over $6.6 billion on June 27, according to DeFi Market Cap. Compared with the $2 billion reported on June 12, there has been a roughly three-fold increase in some two weeks. New asset growth was recently described by Evgeny Yurtaev, the founder of DeFi project Zerion, as “exponential.”

What about the gaming of DeFi tokens and seemingly pointless swapping of crypto coins? Is that a sign of “irrational exuberance” — an indication that the market might be overvalued — and if so, should users be concerned? Regarding this, Greenspan said:

“Most people understand that the golden rule of crypto is not to invest more than you can afford to lose. In the meantime, new economic models are being tested. And that’s pretty exciting.”

Earning Interest on Crypto & Fiat Has Never Been Easier as...