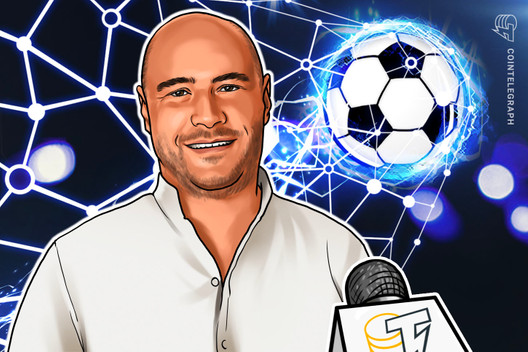 It seemed nobody cared about AR until Pokémon Go launched in 2016. All of the sudden, every headline was about how augmented reality could change the world. Sophisticated technologies like AR, virtual reality, and artificial intelligence need their own “Pokémon Go moment” to appeal to a mainstream audience.

The tokenization of the assets is one such concept, and sports fans might be the first to get some hands-on experience with it. As Cointelegraph’s Gareth Jenkinson noted in his analysis, “sports fans are notoriously passionate about the teams they support, and there is a massive market for everything from tickets to memorabilia, collectibles, and content.”

This ever-present hype creates a massive opportunity for the tokenization of those related assets, and Malta-based sports blockchain venture Chiliz aims to seize it. We spoke to Chiliz CEO Alex Dreyfus for more information on the tokenization of football teams, the pricing, and the popularity of crypto in the sports industry.

Aside from football teams, which industries do you think also have a high potential for blockchain-based tokenization?

We started with sports, and in particular, football, because it is the number one sport in the world, with around 3.5 billion people across the globe calling themselves a football fan. Regardless of the team, their passion for the game is what unites them, and for us, the total addressable market is huge.

We also have a focus on esports for the same reason, and are on the verge of stepping into other high-profile sports verticals too. For Chiliz, any sector that is looking to better engage with a big, global fanbase is a good candidate for blockchain-based tokenization, be that entertainment, TV, or music, and we are actively looking at opportunities across many different sectors.

Which value do you tokenize on a football team? What does a “fan token” provide for the team and fans?

Fan Tokens provide owners with the right to vote in club-designated polls and surveys on Socios.com, the world’s first fan voting and rewards mobile app. For the sports fan, there is an immediate value in that they will be able to directly influence certain club decisions through purchasing Fan Tokens. But it doesn’t end there.

By using Fan Tokens to engage with their clubs, fans will also earn reward points gaining access to unique experiences that will bring them closer to their clubs and exclusive merchandise. While voting & rewards are the primary utilities of the app, we’re going to increase community features significantly in the near future, adding chat functionality, in-app games and challenges and other features that will provide myriad opportunities for token holders to engage more often with their teams and fellow fans, earning increased rewards points while doing so.

It’s important to remember, though, that sports fans are not our only audience, and while there will be extensive utility for Fan Tokens on Socios.com, note that Fan Tokens are real tradable assets. Our Marketplace feature will launch in the near future, allowing users to buy and sell Fan Tokens on Socios.com, while we’ve also recently launched Chiliz.net, the world’s first crypto exchange for sports and  entertainment.

This is the first crypto exchange that doesn’t focus on traditional crypto products. The vision here is to have in excess of 50 Socios.com partners from football, esports, and other sports & entertainment verticals by the end of 2020, and therefore over 50 Fan Tokens that can be bought and sold via Chiliz.net.

This month, we’re also working on our NFT & Collectibles strategy, creating licensed collectibles that will be pegged to $CHZ as well as exploring the tokenization of rewards & unique experiences.

In terms of our club partners, there are myriad platforms all competing for a fan’s attention now, and that’s going to rise exponentially in the years to come. Teams are aware that they need to find increased ways to engage with their fans, ensuring they stay with them and that the next generation does too. Our platform will help them do this. Socios.com will also allow the teams to see through the online fog, allowing them to recognize, reward, and better understand what their true fans really want.

How popular are cryptocurrencies in the sports industry?

It’s been on the rise for a few years now. Both the NBA and MLB have launched digital collectibles, while many sports teams are waking up to blockchain companies as a source of revenue through sponsorship.

Blockchain has also been used for things like crowdfunding for athletes, smart contracts have been utilized for working out the tricky contingencies of professional sports stars contracts, and there are blockchain-based platforms working to solve problems like ticket touting. But there is nothing out there even close to what we are doing.

While other projects are dealing with niche areas within sport, ours is the only truly capable of driving the mainstream adoption of crypto-based assets. We’ve started our journey by partnering with some of the biggest football clubs in the world, so, while it’s still early days, we already have a total addressable audience of hundreds of millions. Also – there are real partnerships – it’s not just a case of sticking our name on LEDs or on the front of the shirts, for example.

The clubs have partnered with us because our vision matches their vision, and we’re allowing them to powerfully and purposefully engage with their fans through our blockchain-based platform.

Our first FTO/poll cycle with Juventus highlighted just what can be achieved, and it was fantastic for us to see all our hard work come to fruition as Juventus fans around the world used $JUV Fan Tokens to choose a new goal celebration song at the Allianz Stadium, with the results announced live to thousands of fans at the game and millions more around the world.

Now, Galatasaray fans have an equally wonderful opportunity to engage with their team, by using $GAL Fan Tokens on Socios.com to choose a new entrance anthem.

You have Chiliz, and you also have Socios. Can you explain the operational relationship between the two?

Socios.com is our consumer-facing blockchain-based fan voting and rewards platform for the sports and entertainment industry, and $CHZ is the cryptocurrency that powers it. The Fan Tokens from Socios.com’s partners are all emitted on their own Proof of Authority side chain. All fan influence polls on Socios.com are executed as smart contracts on the platform’s PoA sidechain as well.

In reality, our mission with Socios.com, aside from increasing fan engagement for clubs, was to open up crypto to a mass audience. In the three months since we beta launched the app, we have acquired 100,000 users, all while still in beta mode.

Tens of thousands of regular football fans have already started to use crypto, purchasing $CHZ in order to buy Fan Tokens, and in time we expect millions more to do so as we continue to add more partners to the platform and increase our reach and grow the brand.

What determines the price of a Fan Token?

Great question, and it leads on nicely from what I’ve just mentioned in the previous answer. The price of Fan Tokens is fixed during the FTO (Fan Token Offering), but it will fluctuate once the tokens become tradeable after the FTO has finished.

For instance, if a club, let’s say Galatasaray, makes a significant signing or a star player is injured, or they progress to the later stages of the Champions League, factors such as these and many more could have an influence on the price of fan tokens, with prices rising and falling based on market and fan sentiment.

An exciting thing to mention about this is that there will be a built-in API that will allow fans to follow the rise and fall in Fan Token prices, in the same way that regular crypto traders do now on platforms such as Binance.

Do you think crypto exchanges are going to get varied by specific use cases? What would be good candidates for such diversification?

Yes, because we’ve just done it. For us, there’s no doubt that sports and entertainment is the perfect choice for such diversification, because what better vehicles are there out there to drive mainstream engagement?

Following the rise and fall of different cryptocurrencies on a regular exchange isn’t a mainstream pursuit as yet. But, following the price of Fan Tokens for your favorite football, esports or cricket team certainly could be. This will also foster the creation of a new media narrative. Just as the media report on movement in the stock exchange due to market conditions and external influences, fluctuations in the price of Fan Tokens owing to the same factors will drive mainstream, business, and financial reporting.

2020 started with the Galatasaray SK soccer team’s launch of the CHZ fan token. Do you have a “roster” for 2020? Are there any other big teams lined up for their fan tokens soon?

It’s going to be a massive year for us. With new sports, new verticals, and new markets, 2020 is going to be the year that Socios.com goes truly global. In the next two weeks we will announce another major partner in the sports industry and that is definitely one to be very excited about. We’ll also be adding a new esports partner in the very near future that is as big as OG with more to follow after that.

We’re very close to adding a massive cricket team to our roster. As well as cricket, we’re speaking to baseball teams and clubs from other big sports too.

We’re also having very active conversations in the entertainment industry. In terms of new markets, the green light to go ahead in Germany has been given, and we’re also very close to getting the thumbs up to go ahead in the US. We’re also looking to consolidate some of the excellent relationships we have in the Middle East, especially in soccer.

We’re also speaking to clubs throughout South America, targeting those passionate fanbases in countries like Brazil and Mexico, and will look to increase our presence significantly there having recently announced a partnership with Argentinean giants Independiente.