Cointelegraph’s official Facebook page, boasting more than 730,000 followers, has been banned by the social media giant, while the cause remains unclear.

On Sept. 18, our page was removed from the platform’s search results. Consequently, Cointelegraph has been unable to publish anything on the account for over a month now, unable to reach the audience. Cointelegraph has reached out to Facebook for additional comments regarding the reason why the page has been unpublished but received no response.

Earlier, Cointelegraph’s Facebook page was blocked during the period of Aug. 1 to  Aug. 11, soon after we published a documentary on the use of cryptocurrencies in the adult entertainment industry titled “Sex & Crypto” and shared it on Facebook, among other social media platforms. Again, Facebook did not specify the precise reason for unpublishing the page at the time nor whether the documentary was the reason for it. On Aug. 12, Cointelegraph was given access to the page back, but — given our current ban — not for long.

Meanwhile, Cointelegraph’s account on Instagram — a social media platform also controlled by Facebook — remains active. The social media company has yet to provide a clear explanation as to why the page was banned. 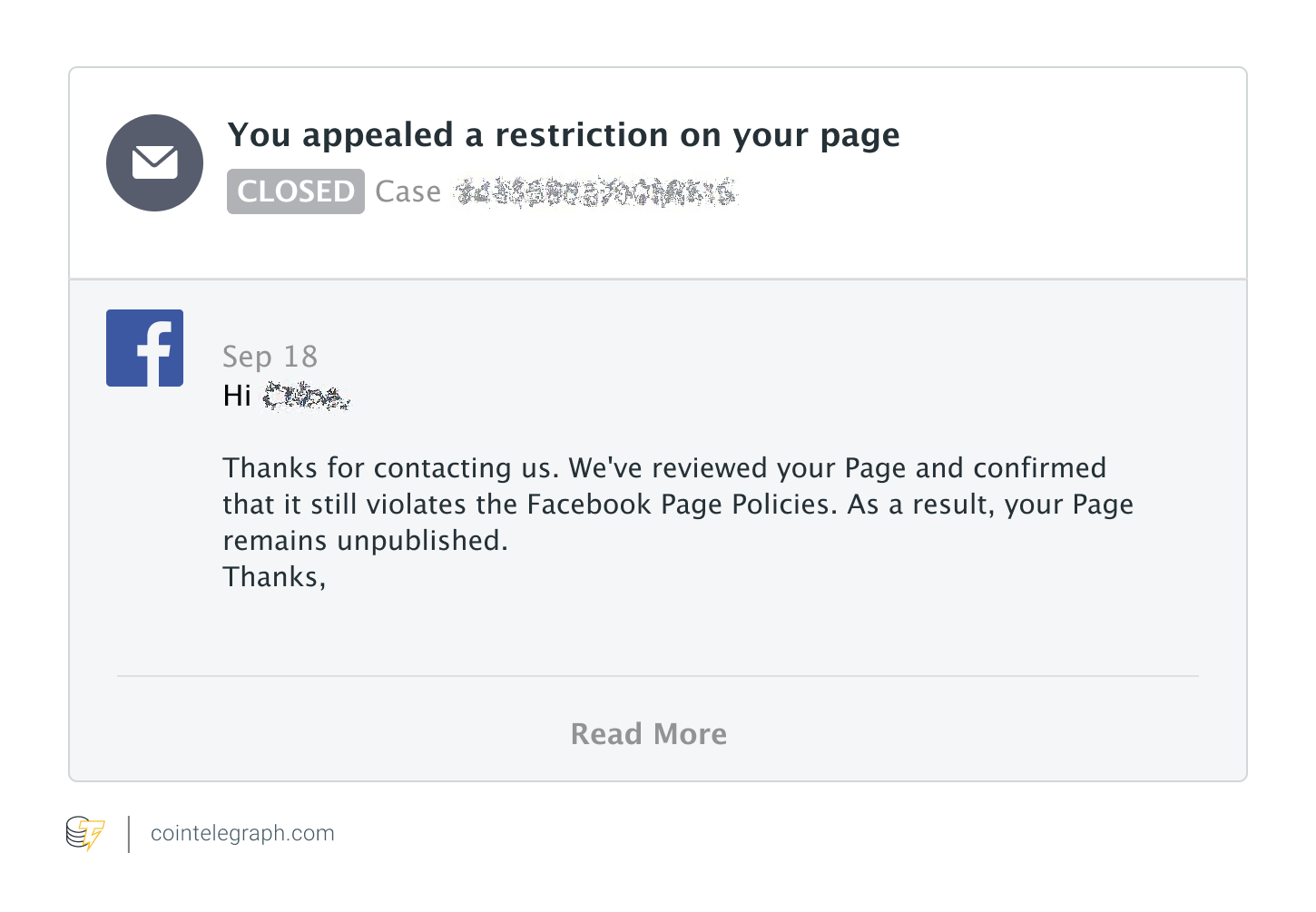 According to Facebook’s “general policies for pages, groups, and events,” pages are prohibited from being “misleading, fraudulent or deceptive,” none of which seem to describe the nature of Cointelegraph’s coverage. Additionally, pages “must not facilitate or promote online gambling, online real money, games of skill or online lotteries without our prior written permission.”

Although we at Cointelegraph do consider digital assets to be a major part of the contemporary financial world — and, by extension, “money” — we’re not certain that “online real money” implies “cryptocurrencies” in Facebook’s terminology.

Nevertheless, Facebook does have a history with strictly cryptocurrency-focused content. In early 2018, the company became the first major social media platform to ban cryptocurrency-related ads. By doing so, it set a precedent for other big tech companies, namely Google and Twitter, which soon followed suit and introduced similar regulations on their platforms.

At the time, Facebook announced that it would prohibit ads that use “misleading or deceptive promotional practices,” referring specifically to initial coin offerings (ICOs) and cryptocurrencies. The accompanying blog post read:

“We want people to continue to discover and learn about new products and services through Facebook ads without fear of scams or deception. That said, there are many companies who are advertising binary options, ICOs and cryptocurrencies that are not currently operating in good faith.”

The ban was “intentionally broad,” meaning that the social media company chose to ban all cryptocurrency ads on its platforms first and then learn how to pick out the ones that are “deceptive.” Cointelegraph experienced no problems covering cryptocurrencies and blockchain news on Facebook during that period.

Six months later, in June 2018, Facebook partly backpedaled on the ban, once again allowing cryptocurrency ads on its platform — this time, however, only from preapproved parties — while the ban on ICOs was kept in full effect. Further, in May 2019, Facebook updated its advertising policy once again, loosening the crypto-ban to an even larger extent: Ads pertaining to blockchain tech, industry news, as well as events and educational materials for cryptocurrencies could now be displayed on the platform without prior approval.

Related: Crypto Advertisement Still Unwelcome, How Is the Industry Coping?

According to the statement provided to Cointelegraph by a Facebook spokesperson last summer, the company took time to work on the policy:

“In 2018, we made clear this policy was broad — along with our hope to refine it while working to better detect deceptive and misleading advertising practices. After a thorough review, the policy was narrowed to no longer require prior approval to run ads related to blockchain technology, industry news, education, and events related to cryptocurrency.”

Given this — along with the fact that Cointelegraph does not promote any ICO as per its editorial policy nor do we run sponsored material without clearly labeling it as such and conducting thorough due diligence beforehand — none of this explains why our page was blocked.

Moreover, despite Facebook’s measures, actual fraud-related crypto ads still manage to find their way onto the platform. Select cases have even resulted in multimillion dollar lawsuits filed against the social media giant.

Cointelegraph has reached out to fellow cryptocurrency-focused publications to see if they have been experiencing problems with Facebook. Jonas Borchgrevink, director of CCN, said that they “have been limited on Facebook to promote news stories.” He added: “We have already decided to not use Facebook going forward.” Kevin Worth, CEO of CoinDesk, said that his publication has not experienced similar problems “in recent years.”

Newest Crypto - January 20, 2022
0
Each influencer has to present his or her own unique qualities in order to present fresh perspectives in the saturated influencer market. Chavah,...