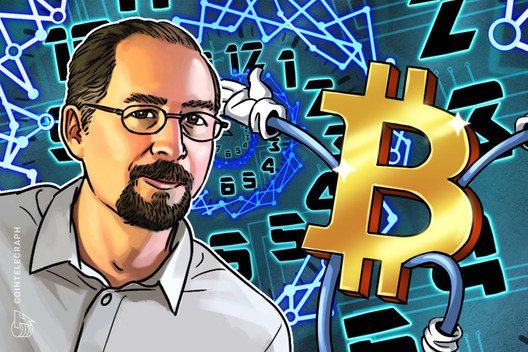 Blockstream’s Adam Back says that unlimited money printing will drive retail investors towards Bitcoin and push the price to $300,000 within five years.

In an interview with Bloomberg — in which he once again denied he was Bitcoin (BTC) creator Satoshi Nakamoto — Back outlined his thinking behind the sky-high price prediction.

The cypherpunk OG — who was cited in the Bitcoin White Paper — added that BTC may not need the long-awaited flood of institutional money to push it into a bull run.

“It might not require additional institutional adoption because the current environment is causing more individuals to think about hedging,” Back said. “And retaining value when there’s a lot of money printing in the world.”

Back is a HODLer

Back — who HODLs the BTC he mines in expectation of price appreciation — cited a number of trends working in Bitcoin’s favour. These included more people working from home as well as overvalued bonds and real estate investments which make it difficult to get a decent return on most investments.

“It is causing people to think about the value of money and looking for ways to preserve money,” Back said. “It’s a difficult environment to get any yield.”

While he praised institutional investment fund Grayscale Investments, which is now buying up more Bitcoin than is being mined, he said the investors’ call from Goldman Sachs last week showed many big players did not understand the paradigm shift. However, this was a money making opportunity for those already in the space.

“It showed some misunderstandings about digital scarcity and what’s useful about Bitcoin,” Back said.

“You have a major sophisticated market player like that with unclear understanding of the value. To me that indicates there’s still a lot of headroom for price appreciation and adoption in the market.”

Back in the day

In May, a YouTube video from Barely Sociable claimed Back was Satoshi and racked up 300,000 views. He’s in the realm of likely candidates, being an early cypherpunk who came up with Hashcash — a system of verification used by BTC. So is he the man?

“No I am not,” he said — but then added that Satoshi’s identity shouldn’t be revealed because Bitcoin is akin to digital gold and “you wouldn’t want gold to have a founder.”

“For Bitcoin to keep a commodity-like perception, I think it’s a very good thing that Satoshi stays out of the public.”

Which suggests that even if he was, he wouldn’t admit to it. It’s a Catch-22.

In January, Back responded to reports that had unearthed early Bitcoin dev Hal Finney’s wild speculation that Bitcoin may be worth $10 million one day. Back said that it was entirely possible that high inflation could make 1 USD be worth 10 cents over a decade or so, which would mean: “$10mil/BTC is $1mil/BTC in today’s money.”

“And $100K Bitcoin doesn’t seem so far given we already crossed $10k threshold a few times when few expected even $1k some years back and $10k seemed crazy.”

With that in mind, it’s possible that Back expects a $300,000 BTC price in five years’ time to be more achievable as it would be worth considerably less in today’s money due to inflation.

It’s closer than it sounds as along the path of hyperbitcoinization, the USD inflation rises, eg aided by Modern Monetary Theory rationale for high inflation, so $1 becomes worth say 10c over a decade or two of monetary craziness, then $10mil/BTC is $1mil/BTC in today’s money.

Newest Crypto - May 17, 2022
0
From September 2021 to January this year, China's contribution to the bitcoin mining network was second only to that of the U.S., according...

Terra’s LUNA Gains, Then Slides, After Do Kwon's Fork Proposal