While Bitcoin has seen its fair shares of rallies and crashes since the 2017 highs of $20,000, the cryptocurrency has not yet entered its fourth macro market cycle. Though a crucial on-chain indicator signals that this is changing.

Bitcoin on Verge of Its Third Macro Bull Market

Crypto analytics firm Glassnode noted on May 18th that the Puell Multiple — the USD value of BTC issued per day over the one-year moving average of that same metric — just reached a crucial level.

As can be seen in the chart below, whenever the multiple entered the green zone, it found a macro bottom. In fact, previous drops in the Puell Multiple have marked the starts of two of three of Bitcoin’s historical macro bull trends. 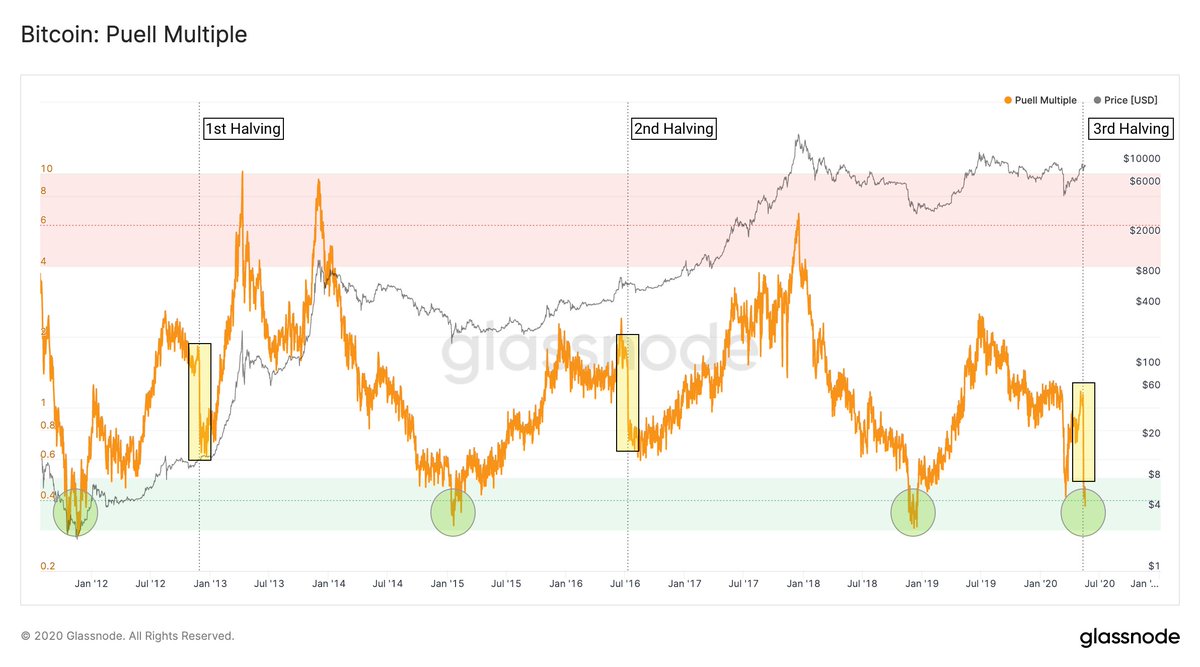 This strong historical precedent indicates that BTC is nearing a post-halving bottom and is about to embark on its fourth long-term rally.

“Drop in miner revenue sent PUELL MULTIPLE back into the green zone today… This zone represents a great time to buy BTC on L/T (18months+) horizons.”

The expectation that Bitcoin is on the verge of its next macro market cycle has been echoed by venture capital giant Andreessen Horowitz. The firm’s partners, Chris Dixon and Eddy Lazzarin, postulated in a blog post that the third crypto cycle came to an end in 2019 while the fourth cycle has just begun.

Crypto asset manager Bitwise echoed this, with the firm’s head of research writing in a report that cryptocurrencies are entering their “Fourth Era” — the fourth cycle that will see the very fabric of the industry change dramatically.

Despite the positive picture painted by the Puell Multiple, Bitcoin could soon be subject to a pullback, analysts say.

A leading cryptocurrency trader recently identified three signs of this impending pullback. As reported by NewsBTC previously, these signs are as follows:

Corroborating this, there have been expectations of a “miner capitulation” event, whereas miners of Bitcoin are forced to turn off their machines or sell their coins to keep their businesses operational.

Finance podcaster Preston Pysh, who has been a long-time fan of Bitcoin, believes that this trend may lead to one more crash in the crypto market — “one more bite at the apple.” He indicated this position in the tweet below.

31 blocks behind schedule on this epoch. The rate seems to be widening as well. There might be one more bite at the apple. For all you deep hodlrs, make sure you got your buying hats ready. @mjdsouza2 @100trillionUSD @Breedlove22 https://t.co/kM5PZ8dp5V pic.twitter.com/TGNfu6Vdry