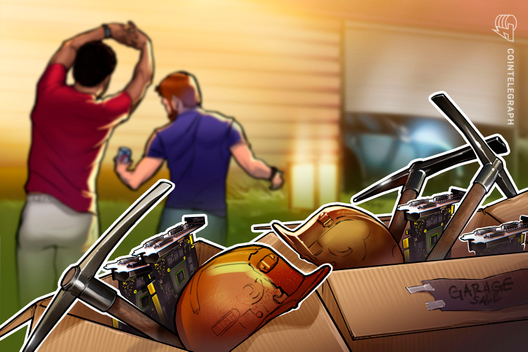 The supply of crypto mining machines failed to meet market demand in Q2 2019 despite the surge of mining hardware prices, new research says.

Popular suppliers ran out of stock in Q2

In the report, released on Sept. 13, the San Francisco-based crypto data supplier wrote that the mining equipment market still performed quite well in Q2 as some popular mining hardware like Antminer S17 were out of stock during the period. According to TokenInsight, those machines are now being sold by manufacturers in the form of future deliverables, which will be delivered in October and November 2019.

However, the mining market reportedly saw a notable surge in the supply of cloud mining — a type of mining that does not require buying mining machines by providing a platform that directly packages and manages the links of mining hardware purchase, logistics, power supply and others. According to TokenInsight, Bitdeer and VeryHash were the two major suppliers of Bitcoin cloud mining hardware in Q2, as in the previous season.

According to the report, the overall difficulty of the Bitcoin network is expected to increase by 48-72% in the second half of 2019. The term of mining difficulty means a value used to show how difficult it is to find a hash that will be lower than the target defined by system. As such, the expected increase in mining difficulty will undermine revenue for a section of mining operators with currently operating machines, TokenInsight noted.

On Sept. 10, crypto analyst PlanB suggested that Bitcoin price should hit $30,000 during its current price cycle, based on mining difficulty indicators’ model.

Even Putin Couldn’t Save This Dark Web Mastermind From Prison

One Wallet Owns 27% of Ether Behind MakerDAO’s Sai Stablecoin