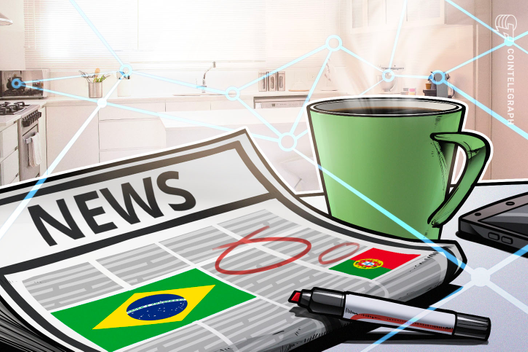 Brazil’s central bank announced that it would classify cryptocurrencies according to International Monetary Fund (IMF) guidelines on Aug. 26. With the new classification under IMF standards, traded cryptocurrencies will be classified as non-financial products and as such, will be counted as goods on the central bank’s balance sheet.

Cielo, Brazil’s largest payment processor network, announced that they would be adding crypto transactions to their Point-of-Sale (POS) devices, numbering some 1.4 million throughout the country.

Customers will reportedly be able to use their mobile phones to scan QR codes generated on Cielo POSs to make payments in several cryptocurrencies including Bitcoin. Moreover, the company may be trying to launch payment services that do not require POS devices at all, and instead can be processed on mobile app alone.

The news follows up on existing Portuguese policy not to tax income from Bitcoin trading. However, Cointelegraph notes that these are rulings by the tax authority, rather than a parliamentary body, and could easily change in the event of new legislation.

MRV, one of Brazil’s largest construction companies, has reportedly carried out its first blockchain-based real estate purchase. According to the company press release announcing the transaction, the land registration process went from up to four months to four days

In what may qualify more readily as a lack of news, Grupo Bitcoin Banco reportedly “has no deadline to pay anyone” after reports that the group is actually a scam. Customers have complained for several months that they are unable to withdraw funds that they invested in the group.

Grupo Bitcoin Banco, which last week alleged that the police had carried out a search of their offices with excessive force, claimed that they had frozen withdrawals on May 24 in response to criminal activity on their platform, adding up to a “scam estimated at $50 million.”