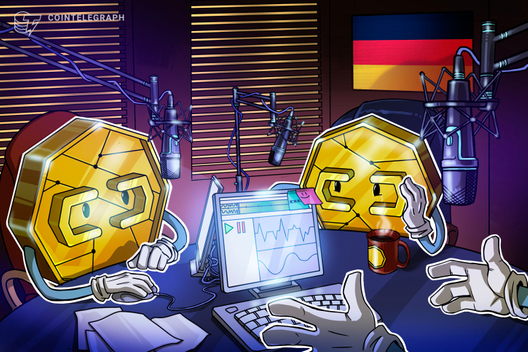 The German-speaking world was highly active as far as crypto was concerned this past week. Among other stories, the German Federal Financial Supervisory Authority (BaFin) issued several items of interest to the crypto community, a new fund for blockchain startups launched in Hamburg and an Austrian crypto ATM service filed for bankruptcy following an armed robbery.

On Aug. 16, the BaFin published a leaflet for issuers of crypto tokens that summarized current German legal standards in the field. By condensing active regulations in such a fashion, the BaFin reportedly hopes to encourage compliance among a new wave of ICOs. In and of itself, this represents a significant courtesy to the industry, but as Cointelegraph auf Deutsch noted, this also streamlines the process on BaFin’s end, reducing the man-hours they must expend communicating with token issuers over opaque policies.

STOs in Germany answer to the MiFID II Directive on Financial Instruments. Having received their MiFID II license, Black Manta hopes to begin STO services at their Berlin-based subsidiary at the end of Q4 of this year.

Black Manta’s next steps will reportedly be in the Asian market. Specifically, Co-founder and managing partner Christian Platzer cited Singapore as the firm’s next target for local licensing, saying:

“While Black Manta Capital Partners want to be ‘boutique’ in its beginnings and run ‘handpicked’ STOs only, our strategy is global from day one: the first step is to link Europe and Asia on one blockchain-based investment platform. Therefore we are already looking today into Singapore.”

A1 Telekom, Austria’s largest mobile service provider, has begun a pilot program for crypto payment terminals in several of the company’s brick-and-motor outlets. Local startup Salamantex and project partners Ingenico and Concardis are providing the terminals and underlying network.

Customers will reportedly only need to have access to a crypto wallet to be able to make purchases at the test stores using select digital currencies. Regarding the extended testing and roll-out period, Markus Schreiber, head of A1 Business Marketing, said:

“Before the A1 Payment portfolio will be expanded by digital currencies and officially available to business customers, a multi-stage trial will now be carried out, starting with selected A1 shops.”

Venture capital Blockrock Ventures has spearheaded a new fund for budding blockchain projects. The fund has reportedly secured 5 million euros and has a goal of 30 million euros.

The new fund is advertised as focusing more on fostering development and providing accelerator services to startups in their early stages than traditional venture capital firms.

Blockrock Ventures is also reportedly looking for a BaFin license that will allow them to manage funds of over 100 million euros.

In some of the more salacious news of the week, a late-July armed robbery of Austrian company Bitiago Crypto Consulting left the firm in dire straits. Two men with rubber truncheons and a gun showed up at the Bitiago’s offices and forced one of the founders to hand over cash, as well as transfer cryptocurrencies to a designated address.

Bitiago had aimed to expand crypto ATM access in Austria, but instead filed for bankruptcy three weeks after the robbery. Company co-founder Andreas Eckhart was reported as saying “You can not continue the business because of the robbery.” Bitiago’s website is already down.