At the end of September, a number of established crypto firms (including Kraken, Bittrex and Coinbase) that are currently operating in the United States came together to establish a new governance body called the Crypto Rating Council (CRC) so as to jointly provide more clarity on the definition of various cryptocurrencies — that is, establish which digital assets can be classified as securities and those that can not.

This development comes as an effort to provide investors (as well as casual enthusiasts) with a clear outlook on which tokens they can trade freely without supervision by various regulatory authorities. Some of the other big-name entities that have signed up to become members of the CRC include:

In addition to this, a Wall Street Journal report also mentions that the CRC is in the process of recruiting new firms to its steadily growing roster. This is being done in order to expand the CRC’s market presence as well as provide the independent crypto body with an air of mainstream legitimacy.

From a technical standpoint, the recently formed council will publish online ratings for digital assets, scoring them on a scale of one to five, where the higher number indicates that a particular asset can be considered a security and thus cannot be issued, sold or traded by unregulated firms.

On the subject of whether the CRC will prove to be a positive development for the industry at large, Cointelegraph reached out to Carlos J. Molina, former vice president at Merrill Lynch & Co., executive director of Morgan Stanley’s Private Wealth Management Group and the current chairman of Private Investment Bank Limited. He told Cointelegraph that, as someone who keeps a close eye on the industry, he is a great supporter of the council:

“The membership’s goal is an important one, in terms of trying to bring legitimacy and regulation for continued expansion, scale and reliability. I admire the effort put forth by all companies who have joined in this initiative. However — as I’m looking at it from a banking and investment perspective. […] I believe they need a wider involvement from others in the securities industry and experts who have experience complying with all regulations and standards, globally.”

Molina further added that it was one thing to have top practitioners taking part in the council’s various initiatives and activities, but to have full-scale experience and perspective to ensure compliance with international securities issuance standards requires a whole new level of industry involvement. He pointed out:

“The end-goal must be investor protection. This focus would really increase the credibility of the CRC and make a significant impact on end-to-end compliance regulations with the SEC, and other recognized regulatory institutions.”

While Molina’s views regarding the CRC seem to be quite warm and optimistic, Kris Marszalek, CEO of Crypto.com, is of the opinion that even though the basic premise of the CRC is well-intentioned and understandable, it may end up doing the industry more harm than good.

Maeszalek told Cointelegraph that in its attempt to bring clarity to this space, the CRC’s opaque rating rules could cloud already-murky waters and add to the confusion that has plagued the crypto market for nearly a decade now. He then went on to say:

“Regulators have had ample opportunity to be supportive of the industry’s efforts to self-regulate over the years, but didn’t take it. I don’t think regulators in the U.S. will perceive the CRC as a viable means to self-regulation; instead they will view it as a misguided attempt that lacks legitimacy and leaving the industry again in need of regulatory clarity.”

Will regulators recognize the CRC?

A pertinent question that has been floating around on the internet since the launch of the CRC is whether or not regulatory bodies like the U.S. Securities and Exchange Commission (SEC) will now alter their own classifications of crypto assets.

Responses on the topic have been quite varied. To get additional clarity on the subject, Cointelegraph reached out to Dan Novaes, CEO and co-founder of Current Media, which claims to have raised $36 million via its CRNC token sale last year.

Novaes believes that, despite the launch of the CRC, it is highly unlikely that the SEC will suddenly change its stance on the crypto industry overnight, adding:

“Independent of the CRC and other lobbying groups, the fact of the matter is that the SEC’s job is to protect investors and consumers alike. Do I believe new rules and exemptions will come into place overtime? Yes, I do. Do I believe crypto companies will not be subject to reporting requirements, the legal hurdles required for registered offerings and investor accreditation checks? Absolutely not. However, the CRC is a step in the right direction.”

On the subject of whether the CRC possesses the required power to bring about any actionable changes within this domain, Sean Keefe, managing partner at crypto investment fund Straight Up Capital, similarly believes that it is still too early to tell what the outcome will be in terms of the CRC achieving its goals.

He further pointed out that there are a number of skeptics who argue that this centralization of control is counterintuitive to the core tenets of cryptocurrencies. Keefe highlighted:

“The key will be how effective CRC will be in maintaining a decentralized governance, that is aligned with the users and developers of crypto. The goal of blockchain and crypto and is to create access, limit centralization, and promote transparency, if the CRC achieves those outcomes it will be a positive outcome.”

How does the crypto industry view the CRC?

To assess the impact of the CRC on the crypto market, Cointelegraph reached out to Sukhi Jutla, an IBM blockchain developer and author of three books. In her opinion, the CRC clarifying the industry will only help to solve existing regulatory issues:

“The SEC should welcome the creation of the CRC as it shows key players in the industry making an effort to create more clarity in this industry. With more clarity, it will make more people more comfortable in using cryptocurrencies which will undoubtedly help local crypto markets to thrive and flourish. People need to feel more confident before they jump into this area and not feel worried they could be penalised.”

A similar point of view is shared by Pauline Shangett, chief communications officer of cryptocurrency exchange ChangeNOW. Shangett believes that the CRC is a promising initiative that is going to do a lot of good for all kinds of blockchain businesses in the U.S., both young and old.

She added that owing to the council’s use of a unified evaluation framework, crypto firms of all financial statures will be treated equally by the council. Furthermore, as Shangett told Cointelegraph, she believes the system introduced by CRC is resourceful:

“It includes some really important metrics that can be applied to an asset that is looking not to be a security, and Bitcoin, Ethereum, and Litecoin serving as really neat examples of already existing evaluations, the system will be pretty hard to argue with. All of us in the crypto community are looking for the same things — crypto being recognized and adopted worldwide. […] If CRC actually delivers on its job of making it easier for the SEC to make their decisions, it’s amazing.”

Soon after the CRC was formed, the council unveiled its first batch of 20 ratings. XRP, Maker (MKR) and Polymath (POLY) have all scored four or above, classifying them as securities in the eyes of the CMC. 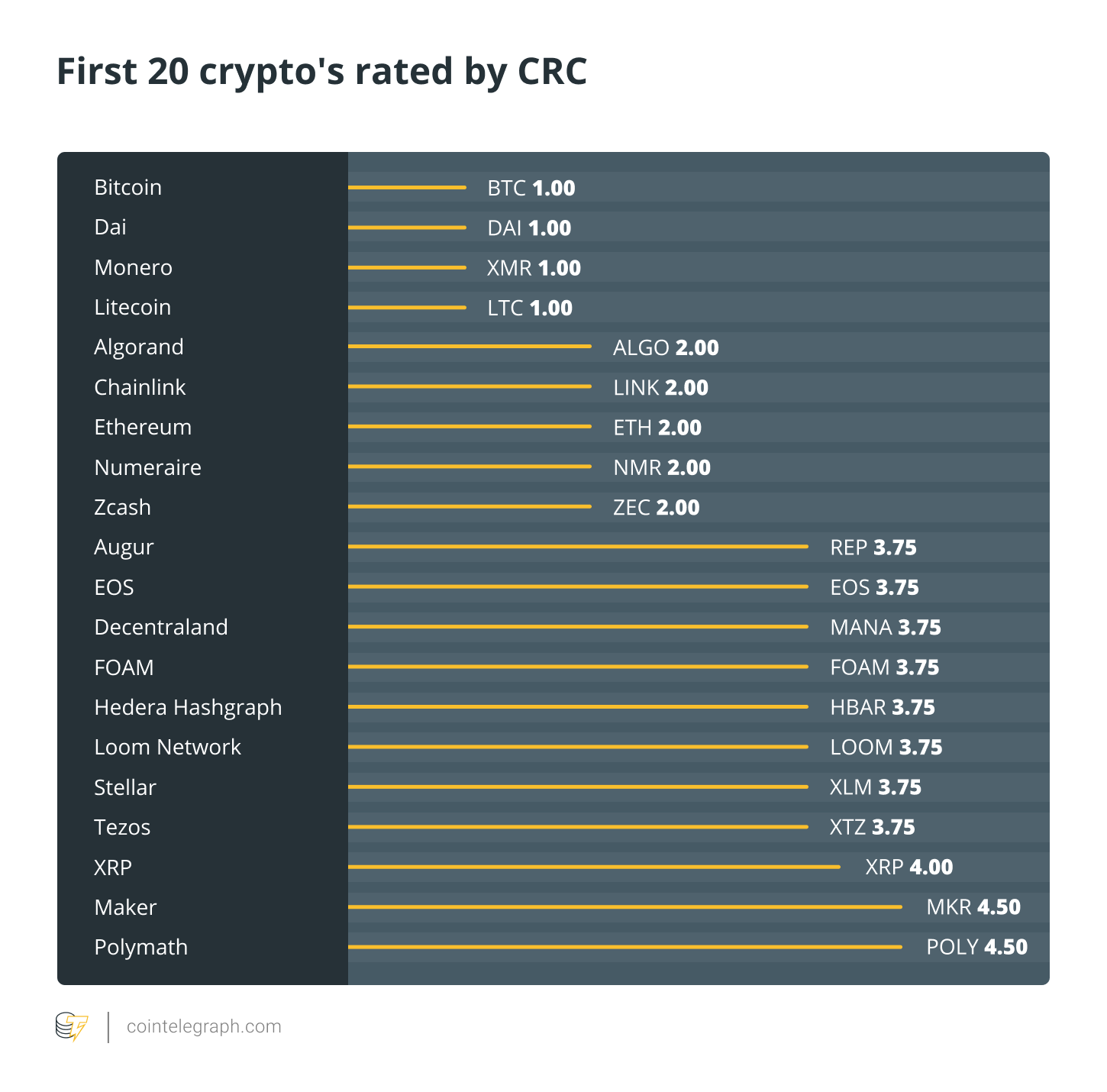 On the other hand, Bitcoin (BTC), Litecoin (LTC), Monero (XMR) and Dai (DAO) were not considered securities, as they each achieved a score of one on the scale. Litecoin creator Chalie Lee has welcomed the score given to LTC in a tweet:

“Although it’s been clear to most that Litecoin is not a security, it’s still good to see the Crypto Rating Council agree.”

Will the CRC will succeed in its mission?

While the market is currently abuzz with all of the recent developments surrounding the CRC, only time will tell whether this independent governance body will be able to make any real impact on this fledgling market sector. For now, most experts agree that the initiative should be commended and viewed as a step in the right direction because it factors in the needs of both regulators and investors.

Newest Crypto - November 30, 2021
0
According to traffic-monitoring data from SimilarWeb, the second-highest number of Axie players in the world are in Venezuela, after the Philippines but ahead...

These Simple Factors Could Lead Bitcoin to Rally to Fresh Multi-Year...