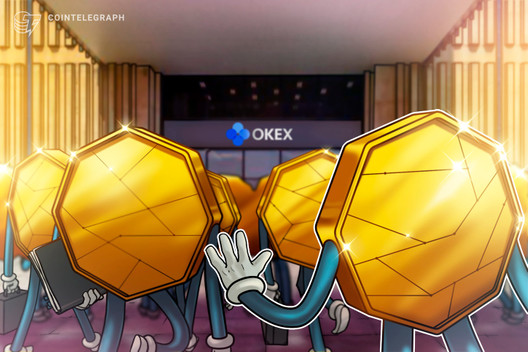 OKEx has listed the native token of Polkadot (DOT) on its trading platform.

According to an announcement shared with Cointelegraph on July 17, DOT spot trading against Tether’s USDT stablecoin on OKEx started at 8:00 AM UTC today. As Cointelegraph recently reported, Pokadot’s technology allows developers to spin up a new blockchain within one hour.

Per the announcement, DOT deposits and withdrawals aren’t supported yet, and the tokens can currently only be obtained by claiming them on the mainnet from Ethereum’s blockchain. OKEx also recently published a detailed guide on how to claim the Ethereum-based ERC20 DOT tokens to Polkadot’s mainnet in a way that makes them available on the exchange.

OKEx announced no date for the launch of DOT withdrawals and deposits. Still, the exchange promised they will be launched alongside additional DOT trading pairs in the near future.

The announcement explains that Polkadot is the first project of Switzerland-based Web3 Foundation, and it aims “to connect private and consortium blockchains, public and permissionless networks, oracles, and even future technologies that are yet to be created.” OKEx CEO Jay Hao explained that such a system is much needed in the ecosystem:

“One of blockchain’s biggest issues still remains interoperability and Polkadot will play a key role in allowing all kinds of blockchains to talk to each other, transact, and exchange data. Since Polkadot allows for cross-blockchain transfer of all types of data and not just tokens, it will hold an important role in the crypto ecosystem preparing for the next web.”

Hao also said that while he does not expect us to move to a decentralized web overnight, he believes “we will start seeing more and more decentralized applications.” Furthermore, he expects that cryptocurrency will play a big role in this future internet. He explained:

“As societies move away from cash and real-world assets are eventually brought onto the blockchain like stocks, gold, real estate, etc. crypto will be used more and more as a simple way of transferring value to any device and more projects like Polkadot will allow us to transfer all types of data securely and trustlessly greatly speeding up the current bureaucracy we live with today.”