A data scientist at India’s prestigious Vellore Institute of Technology has outlined a method for how to purportedly predict crypto prices in real-time using a Long Short-Term Memory (LSTM) neural network.

In a blog post published on Dec. 2, researcher Abinhav Sagar demonstrated a four-step process for how to use machine learning technology to forecast prices in a sector he purported is “relatively unpredictable” as compared with traditional markets.

Machine learning for crypto price prediction has been “restricted”

Sagar prefaced his demonstration by noting that while machine learning has achieved some success in predicting stock market prices, its application in the cryptocurrency field has been restricted. In support of this claim, he argued that cryptocurrency prices fluctuate in accordance with fast-paced technological developments, as well as economic, security and political factors.

As software developer Aditi Mittal has outlined, LSTM is an acronym for “Long Short-Term Memory” — a type of neural network that is designed to classify, process and predict time series given time lags of unknown duration.

To train his network, Sagar used a dataset from CryptoCompare, making use of features such as price, volume and open, high and low values.

He provides a link to the code for the complete project on GitHub and outlines the functions he used to normalize data values in preparation for machine learning.

Before plotting and visualizing the results of the network’s predictions, Sagar notes he used Mean Absolute Error as an evaluation metric, which, he notes, measures the average magnitude of the errors in a set of predictions, without considering their direction. 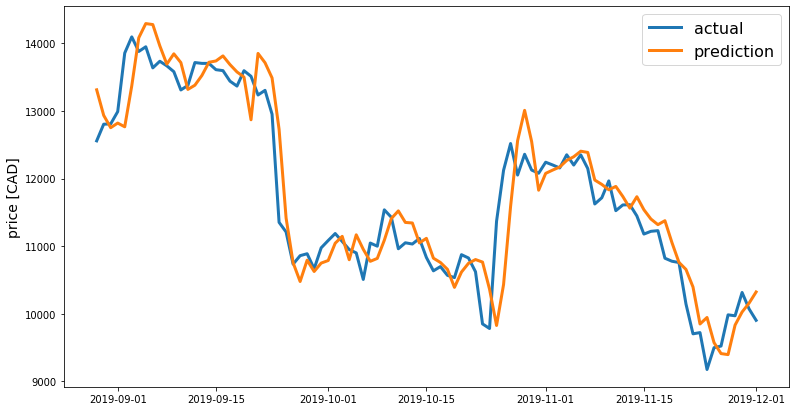 From the markets to outer space

Beyond market predictions, the convergence of new decentralized technologies such as blockchain with machine learning has been gaining ever more traction.

As reported this fall, NASA recently published a listing for a data scientist role, singling out cryptocurrency and blockchain expertise as “a plus.”

The agency — whose primary function is the construction and operation of planetary robotic spacecraft and conducting Earth-orbit missions — further required qualifications in one or more related fields including machine learning, big data, Internet of Things, analytics, statistics and cloud computing.