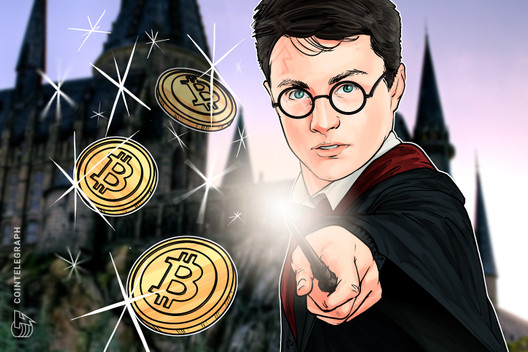 As part of a recent tweet calling on all novelists to message her with their questions on Bitcoin (BTC), CoinDesk journalist Leigh Cuen publicized a tweeted response from none other than beloved Harry Potter author J. K. Rowling.

“I don’t understand Bitcoin,” Rowling said, adding, “Please explain it to me.”

The first thing you need to understand is that Bitcoin is magic. It allows you to exchange money with anyone in the world instantly, cheaply and securely, without the need for any centralized, Goblin-based banking authority.

Chapter 1: The White Paper From No One

Bitcoin was invented by a mysterious computer programmer named Satoshi Nakamoto — almost assuredly a pseudonym. In Bitcoin’s 10 year history, the identity of Bitcoin’s creator has never been unearthed. We can refer to him here as He-Who-Has-Not-Been-Named.

Ownership of each coin is confirmed and recorded instantly in a digital ledger called a Blockchain — similar to how the Quill of Acceptance records the name of each new potential Hogwarts student in the Book of Admittance. Except instead of recording magical births, we’re recording who does and doesn’t own a particular coin.

This ledger is public and allows anyone to see who has owned a given coin throughout its history. A good visual representation for this process is a checkout card in a library book.

Contrasting with Gringotts (as well as with muggle banks), Bitcoin has no set hours of operation. You can send your Bitcoin anywhere in the world — day or night, 365 days per year — and the recipient will receive it in a matter of seconds. It’s also pretty darn secure, no dragons necessary.

Following Gamp’s Law of Elemental Transfiguration, new money cannot be conjured from nothing. Bitcoin respects this particular law far better than any government-issued currency. Only 21 million coins will ever exist on the Bitcoin network, and nothing can ever change that. By capping the number of Bitcoin to this finite amount, scarcity bestows each coin with a certain level of intrinsic value.

It also protects Bitcoin from the woes of extreme hyperinflation seen in government-issued currencies.

Chapter 4: The Magical Mine

Bitcoin transactions must be validated in order for them to be added to the Blockchain ledger. Anyone in the world is able to contribute to this mining process using computer processing power.

The first miner to confirm each new batch of transactions, called a block, receives a fresh issuance of brand new, never-before-spent Bitcoin as a reward. As a whole, this process would make a fine candidate for the Ludicrous Patents Office.

Users store their Bitcoin in a digital account called a wallet. Each wallet is protected by a unique private key, sometimes recorded as a series of human-readable words. Similar to a passcode or spell, knowing the right combination of words allows anyone to access the coins stored in a particular wallet. On the other hand, losing this key means that its corresponding wallet can never be opened again. That is why it is important to keep your wallet’s private key a secret, while also maintaining adequate backups in as many locations as possible. Seven is a great number — and you don’t even have to kill anyone to make them.

Unlike sending bank wires, checks or other online payments, sending and receiving Bitcoin does not directly expose any party’s private information. To receive Bitcoin, one simply shares their public wallet address — a string of letters and numbers — which, in and of itself, poses no hacking risk. Kind of like an email, but for money.

Bitcoin can be bought and sold using any number of online marketplaces called exchanges. Coins can be traded for nearly any global currency — save, perhaps, Galleons — at constantly fluctuating prices. They can also be traded for other Blockchain-based currencies.

Bitcoin’s 10-year history has seen our community transfigured in many different ways. Though the technology began as a way to allow people to securely send money online without the oversight of banks or governments, it is now so much more.

Blockchain is being used to create self-executing applications that, in some ways, think for themselves. Developers are utilizing the technology to craft unhackable voting platforms, impossibly huge file storage methods, provably fair betting systems (sure to stoke even Ludo Bagman’s ire), and even authenticate and distribute art across every medium to individuals around the world.

We can’t predict all the magical ways Bitcoin’s underlying technology will impact our lives in the future. Divination is, after all, a woolly discipline. What we can say for certain is that Blockchain’s strength is in redistributing power. It removes the need for governing bodies and returns the power to share knowledge, riches and even the control of individual privacy back to the people.

Benjamin Pirus contributed to this article.