At the start of June, Bitcoin suddenly surged towards and past $10,000. The cryptocurrency rallied so far and so fast that $123 million worth of short positions on BitMEX were liquidated within an hour.

Investors were understandably bullish. One Wall Street veteran shared a chart expressing his sentiment. It showed that BTC had broken past a technical downtrend that formed after the $20,000 all-time high. Others shared in the sentiment, saying that the move was the start of a big bull run.

Yet as fast as the cryptocurrency rallied, it crashed, rapidly falling under $10,000 just a day later.

Despite the rejection, analysts remain bullish. One trader has said that from a macro perspective, Bitcoin is still in a strengthening uptrend.

Related Reading: An Infamous Bitcoin Whale Just Resurfaced — and He’s Got a Bone to Pick

Bitcoin In a Strengthening Uptrend? Analyst Weighs In

It’s been easy to flip bearish after Bitcoin’s rejection at $10,500 earlier this month.

That price level has marked a number of crucial highs over the past year for the leading cryptocurrency.

Yet Eric “Parabolic” Thies is arguing that Bitcoin remains in a macro uptrend.

He shared the chart below on June 29th. It shows BTC’s one-month price action with so-called Heikin-Ashi candles, which are normally used to observe trends.

Per Thies, with June about to close with a wick higher than May’s, Bitcoin is signaling “trend strength.”

He added that should “July open green, traditional Heikin Ashi-based trend reading suggests the third candle to be trend confirmation and strong continuation to the upside.” 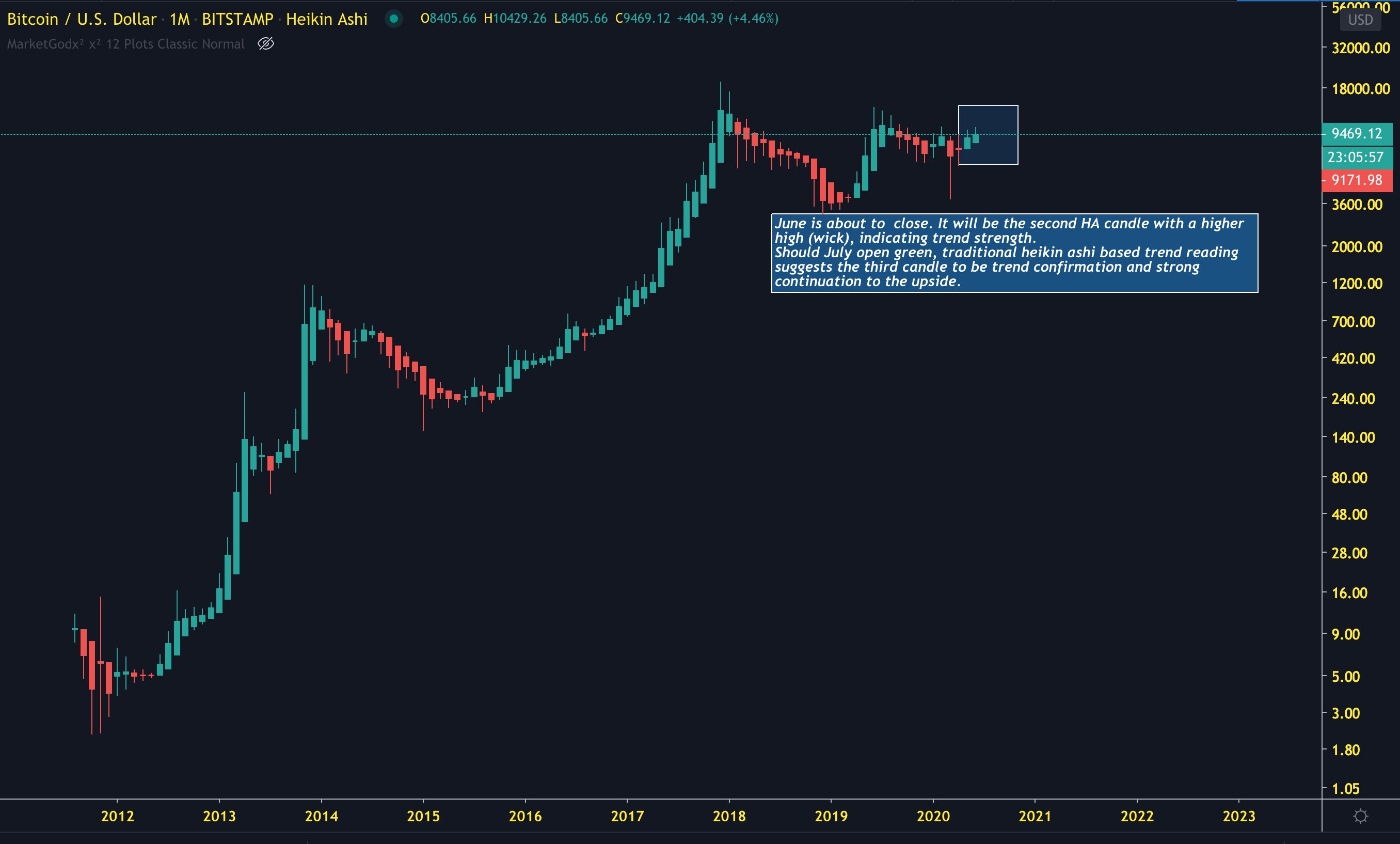 He noted that the one-month Chaikin Money Flow and Stochastic RSI indicators suggest that “your time to buy Bitcoin below $10k is limited.” The indicators last looked as they did now prior to the 2016-2017 bull run that took BTC from the hundreds to $20,000.

Fending Off the PlusToken & Miner Threat

Bitcoin will have to fend off two big pools of selling pressure, though, if it is to head higher.

Those are the ~$450 million recently moved by the PlusToken scam operators and Bitcoin miners.

DTC Capital’s Spencer Noon reported that the operators of the scam are moving coins, with some moving to mixers and exchanges to presumably be sold:

Blockchain analytics firm Glassnode has also reported that miners are withdrawing more coins to exchanges than they have in a year.

How Bitcoin Dominance Bullish Engulfing Could Signal An End To Altcoin...