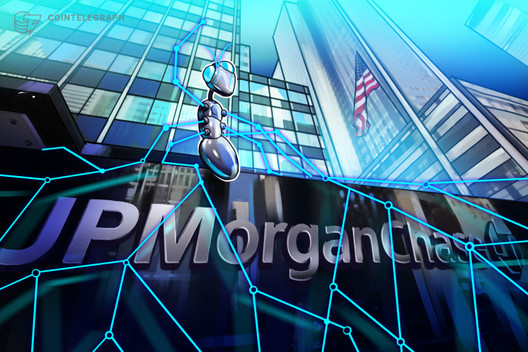 A recent report by a Major United States bank JP Morgan Chase suggested that current blockchain developments are lying down the foundation for digital money, but adoption is still years away.

A report published by JP Morgan on Feb. 21 suggests that the finance industry is moving beyond blockchain technology.

Blockchain in banking still years away

Per the paper, the groundwork for mainstream adoption of blockchain, fast payments and digital currencies is already in place. According to JP Morgan, the adoption of blockchain in banking is three to five years away. Still, the bank also believes that project’s like Facebook’s Libra stablecoin calls for a higher degree of centralization:

“For a stablecoin like Libra to succeed, it will likely require short-term liquidity facilities, a source of positive-yielding reserve assets, and less distributed, semi-private networks.”

The report also notes that the cryptocurrency market is showing signs of maturity such as increasing institutional participation and the introduction of new contracts on regulated exchanges.

Still, the researchers also point out that crypto assets continue to show extreme price volatility and claim that Bitcoin (BTC) has already cleared “intrinsic value but have yet to demonstrate their value for portfolio diversification.” The document reads:

“Developments over the past year have not altered our reservations about the limited role that cryptocurrencies play in global portfolio diversification or as a hedge instrument.”

JP Morgan itself is among the banks involved in blockchain and crypto asset development. In June 2019, the institution’s head of digital treasury services and blockchain Umar Farooq said that the firm intended to test its JPM Coin digital currency with selected clients before the start of the current year.

Earlier this month, reports suggested that JP Morgan is also considering merging its own blockchain platform with that of a major Ethereum-focused firm ConsenSys.