Algorand officially unveiled a suite of new features to its pure-proof-of-stake network at the end of November, dubbed Algorand 2.0. The latest suite of technical innovation by the emerging “frictionless finance” network, the upgrade encompasses the official commissioning of smart contracts on the network, along with the Algorand Standard Assets, or ASA, and atomic transfers.

Algorand started off with a bang through its $60 million initial coin offering, which led into its vaunted technology upgrade — Algorand 2.0.

Related: How MIT Joined Ethereum in the Race for the PoS Blockchain

The move came just before 2020 — a year proclaimed by Polkadot founder and Solidity creator Gavin Wood to be characterized by the looming “Blockchain Wars” between competing public blockchains.

When it comes to public smart contract platforms, however, Ethereum still reigns king. While pulling developer talent away from its impressive network effects remains any protocol’s biggest challenge, Algorand continues toward growing adoption with different audiences: the public and private sectors.

With the launch of 2.0, Algorand is growing the technical capabilities of its protocol on pace with its list of formidable partners. Saving the best for last, Algorand finished 2019 with major projects underway, such as World Chess’ launch of a hybrid initial public offering, Fondazione Bordoni working with Algorand for the Italian government, the International Blockchain Monetary Reserve launching a microfinance platform for Southeast Asia on Algorand, a Sharia-compliant certification from Dubai, and $60 million in real estate tokenized on the Algorand blockchain by AssetBlock.

The collaborations follow the ALGO token’s listing on several prominent exchanges, including Coinbase and Binance, who upgraded ALGO to support the V2 0.2 implementation.

In the public sector, Algorand’s recent partnership with Fondazione Ugo Bordoni, or FUB, in Milan to explore the potential economic and technical impact of Algorand’s protocol on developing Italy’s “trust infrastructure.” Mirella Liuzzi, under-secretary of State of Ministry of Economic Development, stated:

“The signing of the agreement between the FUB and the Algorand Foundation, signed at the Milan meeting of the European Blockchain Partnership of which Italy is co-president, once again confirms the international role assumed by our country on the subject and the attention of the MiSE towards emerging technologies such as the Blockchain also through the promotion of technical-scientific synergies on the subject.”

Adoption isn’t just a function of savvy business development, however. There is a lot of new technical innovation that is helping Algorand break away from competing layer one protocols like EOS and Tezos in real-world utility.

Algorand 2.0 is appealing to developers

Network effects in crypto networks are paramount, especially in terms of developer adoption. As mainstream business and consumer sectors have yet to adopt DApps or public blockchains as their primary financial infrastructure, attracting motivated developers — who ultimately design the products with which end-users interact — remains one of the most difficult objectives for any upstart network in the market.

While user experience and consumer utility are the primary inducements of the mainstream, versatile yet powerful technology is a major draw for the blockchain world’s invaluable technical talent.

For example, the current ascendance of “next-generation” blockchains is predicated on the notion of improving areas where Ethereum initially struggled. High gas costs, limited on-chain transactions per second, or TPS, and costly resources for running full nodes opened the door for these platforms to steal developer interest. 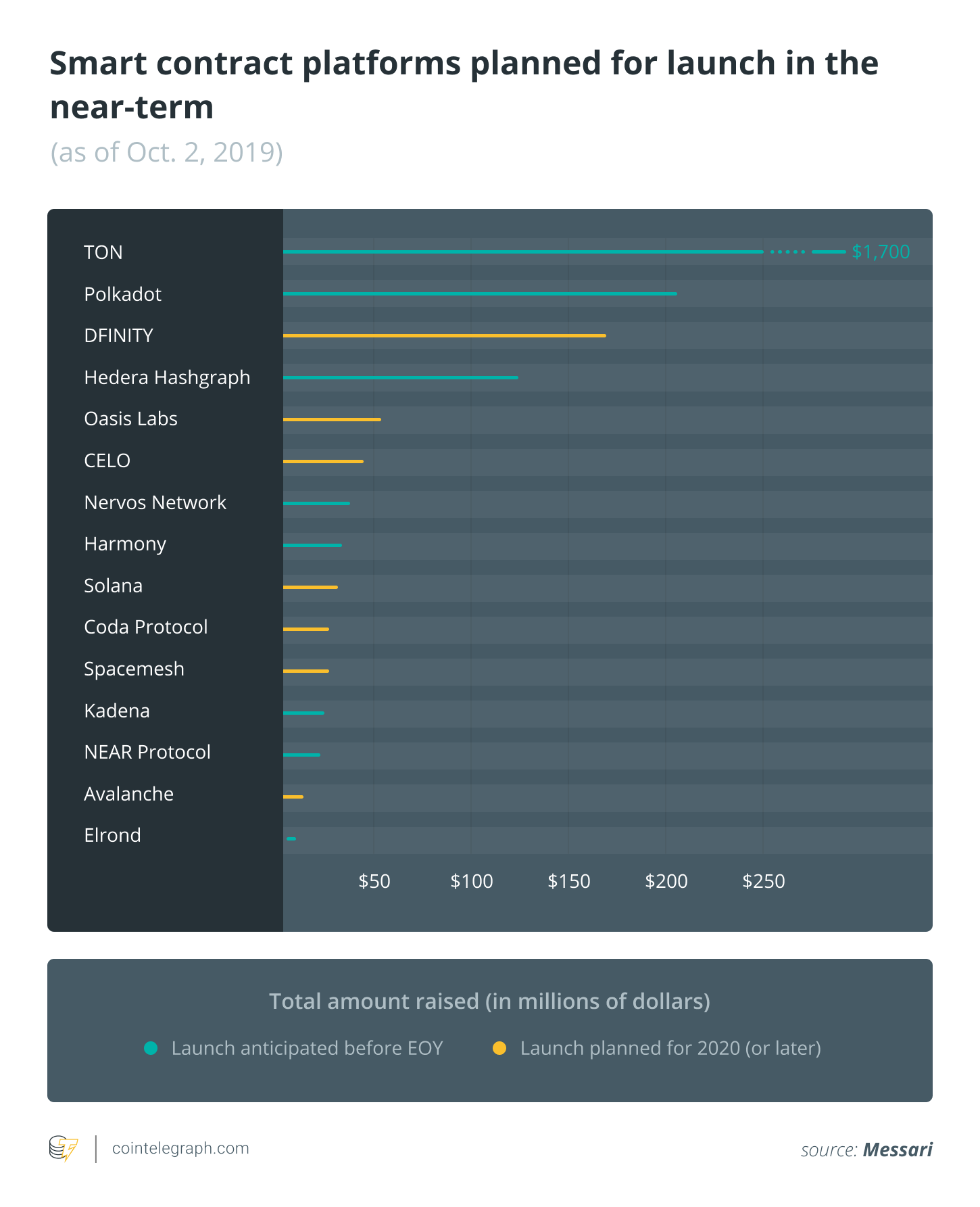 The Algorand 2.0 release includes a trio of developments for its layer one on-chain functionality:

ASA primarily focuses on one of the crypto market’s principal initiatives to attract institutional adoption: The digitization of financial assets. The ASA enables developers to digitize virtually any type of financial asset (e.g., securities, regulatory certificates, etc.) on layer one of the network. The framework is standardized, a necessity for interoperability and regulatory compliance, and can include asset characteristics such as non-fungible, fungible and restricted assets.

In the case of restricted assets, a company such as a financial institution could issue a digitized asset using the ASA and Algorand’s Role-Based Asset Control mechanism for features like privileged asset transactions (e.g., “whitelisting”), quarantining account transfers for investigative purposes, or force-transferring assets for legal purposes.

This is markedly different than smart contract platforms like Ethereum, where standardized protocols such as ERC-20 lack clear guidance on the semantics of its events, despite being a standard to enable functionality between wallet interfaces.

Atomic Transfers — another feature released in Algorand 2.0 — are an exciting prospect for the broader industry. Also baked into the first layer of Algorand, Atomic Transfers are a trust-minimized method for inducing batched transactions between multiple parties, concurrently.

In an Atomic Transfer, all transactions are either executed at once, or not at all.

The method gained appeal in arbitrage trading strategies for DEXs on Ethereum but came with several limitations. Algorand expanded the concept of atomic transfers to include a much faster execution (a downstream consequence of Algorand’s high TPS), reduced fees, and most importantly — multi-party transfer of ASA assets using Atomic Transfers.

Finally, the last (but not least) integration of Algorand 2.0 is the introduction of official smart contract support into the on-chain layer.

Due to Algorand’s high-performance and stake-based consensus, smart contracts can be executed virtually instantly at drastically reduced costs. Smart contracts are crafted with custom rules and logic, and can facilitate complex economic interactions using ASA, atomic transfers, and a transaction primitives language written by Algorand, specifically Transaction Execution Approval Language, or TEAL, which is a bytecode-based stack language used for validating and executing transactions within Algorand. TEAL operates within nodes in Algorand to determine whether or not transactions are valid, and TEAL programs should be concise, as they run in-line with block assembly and validation.

ASC1 contracts on Algorand have several downstream consequences, including regulated disbursements, cross-chain atomic transfers, and even the removal of private key management requirements for ASC1-governed accounts.

But to better understand these perspectives from a broader context, it is important to evaluate how Algorand is partnering with other organizations to leverage the advantages of its 2.0 suite.

Moving forward, 2020 will ultimately prove a pivotal year for the “Blockchain Wars” romanticized by Gavin Wood.

Only time will tell if Algorand and the class of accompanying public blockchain networks can steal some of Ethereum’s market share before the pending release of Ethereum’s Serenity upgrade.

The clock is ticking to return results that attract both institutional and mainstream adoption.

Algorand 2.0 is a compelling start to serving the mainstream (versus purely crypto) world and should, at the very least, pique the interest of developers in the decentralized finance sector looking to extend Ethereum’s pioneering of the blossoming open finance movement.

Andrew Rossow is a millennial attorney, law professor, entrepreneur, writer and speaker on privacy, cybersecurity, A.I., AR/VR, blockchain, and digital monies. He has written for many outlets and contributed to cybersecurity and technology publications. Utilizing his millennial background to its fullest potential, Rossow provides a well-rounded perspective on social media crime, technology and privacy implications.

NYDIG cuts Bitcoin fee to 0.3% for investors as Morgan Stanley...