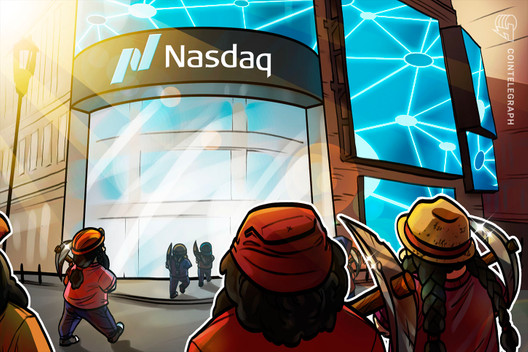 On June 26, Chinese firm Ebang was listed on the Nasdaq Global Market under the ticker EBON, becoming the second Bitcoin (BTC) mining manufacturer to go public on a United States stock exchange.

The company intends to secure up to $125 million in the offering and follow up with an ambitious enlargement — namely, it plans to open up a cryptocurrency exchange and mining farms. So, what does going public mean for the mining player, and will other crypto companies follow suit?

From telecoms equipment to Bitcoin mining

According to documents Ebang filed with the U.S. Securities and Exchange Commission, the company was launched by Dong Hu, its current chairman and CEO, in 2010 to sell “communications network access devices and related equipment.”

The Chinese firm entered the crypto scene in early 2014 and began selling its own brand of mining equipment in December 2016. In August 2015, Zhejiang Ebang was listed on the National Equities Exchange and Quotations, or NEEQ — a Beijing-based over-the-counter national securities trading market — but was delisted in March 2018 “in preparation for the reorganization.”

Soon after being delisted from the NEEQ, the company incorporated Ebang International Holdings Inc., its current holding company, in the Cayman Islands as an exempted firm with limited liability. Shortly after, the company attempted to go public for the first time. It filed a draft initial public offering prospectus with the Hong Kong Stock Exchange, or HKEX, but the application has since lapsed. Currently, Ebang is considered to be among the top-four largest mining equipment makers globally along with Bitmain, MicroBT and Canaan.

Ebang’s revenue has been falling for the past two years, as was disclosed in the SEC filing. Figures from an earlier period were not revealed, as the firm qualifies as “an emerging growth company” as per the regulator’s guidelines and is permitted to provide audited financial statements for just two fiscal years.

However, according to previous reports based on the company’s 2018 HKEX filings — which are no longer accessible because the application has lapsed — its 2017 revenue was several times lower than the 2018 figures. Seemingly flush with success, Ebang was looking to raise as much as $1 billion at the time.

According to the latest documents, Ebang experienced a gross profit of $24.4 million in 2018 after raking up $319 million in revenue. In 2019, it earned just $109.1 million in revenue, registering a net loss of $41.1 million. Explaining the slump, the company claims to have “suffered from the significant drop in the average Bitcoin price historically,” adding that it cannot make assurances that it “will be able to gain revenue growth” or that it “will not experience another significant decline.”

Notably, the company’s revealed statistics for this year don’t suggest a huge uptick in revenue. The company registered a net loss of $2.5 million for the first quarter of 2020, blaming a “significant decrease in certain non-recurring local government’s tax rebates,” although it noted that its sales volume has increased since 2019.

An Ebang representative told Cointelegraph that the company has major expansion plans, intending to fill a more unique niche within the cryptocurrency industry by continuing to manufacture Bitcoin mining equipment while also diversifying its operation by setting up a cryptocurrency trading platform and its own mining farms: “We will soon establish our own mining farms with [a] flexible cooperation model […] as well as mining pools to sell our computing power and we will also start to set up [a] cryptocurrencies trading exchange.”

In addition, the company said it will explore how blockchain can be applied to “financial services, education and healthcare industries.” Hence, getting listed on Nasdaq is a cornerstone of Ebang’s expansion plans. According to the representative, the IPO will enhance Ebang’s brand awareness, help to attract “more talent” and help set up a crypto exchange:

“Credit is the most important point for establishing the cryptocurrencies trading exchange, and a Nasdaq listed company regulated by U.S. Securities and Exchange Commission should be able to strictly control the compliance and safety of the transaction.”

Indeed, Ebang described setting up a cryptocurrency exchange “in overseas jurisdictions” in the filings it submitted to the SEC. Although the company itself is based in China, where cryptocurrency trade is prohibited, its holding company is incorporated in the Cayman Islands. Experts agree that going public might give a jolt to Ebang’s operation. Russell Cann, the chief customer success officer for blockchain and artificial intelligence startup Core Scientific, told Cointelegraph:

“Generally, an IPO can be a turning point or a new chapter for companies that experience periods of hyper growth. With the massive up-tick in activity and increasing attention and focus of institutional investors on the space, Ebang’s IPO may give it the cache to be able to not only bolster its balance sheet and enable additional growth, but enhance its talent pool; potentially increasing efficiencies in R&D, Sales & Marketing and Operations.”

According to John Todaro, the director of institutional research at TradeBlock, Ebang is likely pursuing an IPO for the additional funding as well as for the purpose of “providing a liquidity event for early investors and/or founders.” Todaro noted that it seems to be an opportune moment for Ebang to go public, given that the stock market appears to be coming out of a COVID-19-induced coma in recent weeks, adding:

“IPOs are challenging in the current environment given COVID-19 as many investment banks have postponed IPOs given the anticipated weakened investor demand. With the equity markets doing surprisingly well in recent weeks, you are seeing an increase in IPOs that were initially delayed. This renewed investor enthusiasm in public markets could bode well for Ebang’s listing.”

Johnson Xu, the chief analyst at TokenInsight, suggested that raising capital seems to be Ebang’s primary focus for the IPO, although being a Nasdaq-listed company is also a key development. He told Cointelegraph: “I believe for Ebang it is a mixture of hoping to attract status and attract more funds to fund the future R&D and operations of the company,” adding that “the crypto mining ecosystem is a capital intensive industry, thus requires heavy capital investment in the very beginning.”

As noted earlier, Ebang is the second publicly traded Bitcoin mining equipment company to be listed on the U.S. stock market. In November 2019, Canaan — which is also a Chinese company — was listed on Nasdaq, raising $90 million by selling 10 million shares for $9 each.

However, its IPO was largely underwhelming. Canaan lost its biggest bank, Credit Suisse, just a week prior to the listing, raising over 75% less than the figure expected originally. Moreover, its stock has largely plunged since, as it currently trades below $2. It’s difficult to predict how the stock market will react to the new crypto mining firm, as Cann explained to Cointelegraph:

“In hindsight, some of the issues previous companies have encountered generally form excellent precedents for new entrants around what to do and what not to do. That being said, the public markets are also an efficient form of capital allocation that ensure value is appropriately distributed to the teams and projects that are growing the right way. As digital mining is still a relatively new industry we’re eager to see how the sector learns these lessons.”

TradeBlock’s Todaro is more skeptical, as he doesn’t see “how Ebang would materially outperform Canaan, either in its financial results or stock price.” He elaborated that “Bitcoin mining has come under pressure since the ‘halving’ with mining revenues falling on the reduced new issuance supply.” This fact coupled with the lower electricity costs that have come about with China’s rainy season means more miners can come back online, which means that Ebang would rely on a surge in the price of Bitcoin to turn a profit.

Related: Sichuan Rainy Season to Give Bitcoin Hash Rate a Much Needed Jolt

Xu noted that the mining industry remains “opaque” in the eyes of mainstream investors, which might result in “premium valuation” at the initial stage. But once listed, “the information costs to understand the company structure and the market information asymmetric slowly get reduced, thus the premium valuation pre-IPO wouldn’t be reasonable, thus putting downward pressure on price.”

An Ebang representative told Cointelegraph that the company is fundamentally different than Canaan:

“According to public information disclosed by Canaan Inc., its key development direction is focusing on AI. Although we are peers in Bitcoin mining machine industry, Ebang focuses on the blockchain industry chain, integrating the digital economy industrial ecosystem.”

At this point, it seems like Chinese mining companies are the main crypto representatives on the stock market. Along with Canaan and Ebang, there is also Bitmain — the largest mining maker, which is currently going through a major power struggle between its two co-founders.

Bitmain has been eying an IPO since 2018 and also went through an unsuccessful attempt to get listed on the HKEX, but it could potentially enter the U.S. equity market in the near future — toward the end of 2019, the mining giant discreetly submitted a Deutsche Bank-backed application for an IPO.

It is important for Chinese mining companies to be listed in the U.S. because it represents the most liquid public stock markets, according to Todaro. However, he noted that more crypto companies — and not necessarily the mining ones — could join the IPO race in the future:

“Many crypto projects and enterprises are decentralized, which would make a public equity IPO futile and so on that side there likely will be no public equity offerings. But there are a number of centralized companies in the space that have become large enough that an IPO would make sense, such as a Coinbase, which will likely explore an IPO in the next few years.”

Indeed, on June 24, South Korean crypto exchange Bithumb reportedly tapped Samsung Securities as its underwriter to prepare for an IPO.

Xu told Cointelegraph that it is “extremely difficult” for Chinese mining companies to access fresh liquidity internally due to regulatory uncertainty, among other things. As a result, those companies are actively seeking to access capital outside of China, with the U.S. market being the main target. Moreover, getting listed on a U.S. exchange is rightly “viewed by most tech and hardware companies around the world as the pinnacle of making it,” Cann added.

Notably, the Ebang listing comes amid reports suggesting that Nasdaq is going to tighten its restrictions on IPOs to prevent smaller Chinese companies from being listed. In its latest filing with the SEC, Ebang referenced the “Holding Foreign Companies Accountable Act, or the Kennedy Bill,” which aims “to kick deceitful Chinese companies off U.S. exchanges.” The legislation was passed by the U.S. Senate on May 20.

According to Ebang, the “enactment of the Kennedy Bill or any other similar legislations or efforts to increase U.S. regulatory access to audit information could cause investor uncertainty […] and the stock price could be materially and adversely affected.”