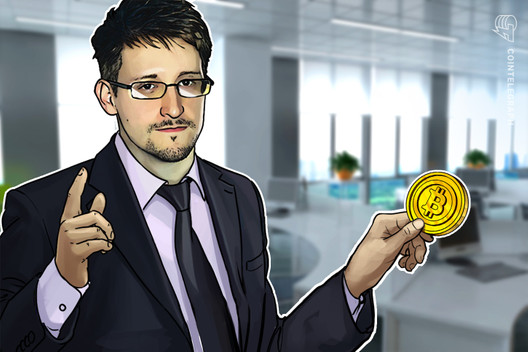 In a tweet posted on March 13, Snowden — famous for disclosing top-secret documents that revealed the extent of American and British global surveillance operations — wrote:

“This is the first time in a while I’ve felt like buying bitcoin. That drop was too much panic and too little reason.”

Snowden’s comments come after what is thought to be Bitcoin’s sharpest ever intra-day plummet yesterday when it briefly dropped to a new yearly low of $3,782.

The dramatic drop was in step with market mayhem worldwide, as United States President Donald Trump summarily announced severe new travel restrictions today in response to the spread of the COVID-19 coronavirus.

On March 12, the Dow and FTSE suffered their worst day since the Black Monday crash of October 1987, prompting the New York Federal Reserve to announce an emergency action to pump $1.5 trillion into the American financial system.

This havoc has intersected with an oil sector in freefall, as Saudi Arabia and Russia lurched into price war amid collapsing global demand due to the COVID-19 outbreak.

Veteran trader Peter Brandt — who earned a reputation for correctly predicting the collapse of the 2017 crypto market bull run — tweeted his sobering view of the BTC/USD market on March 12:

Amid warnings that Bitcoin looks to retest 2-year lows, altcoin prices took a battering, too.

Unsurprisingly, Snowden’s intervention polarized responses on social media, with one hailing “#bitcoinblackfriday” as the “sale of the decade” and another quipping:

“Try to buy some toilet paper right now. Use a US-based VPN server.”

Snowden’s bullish view of Bitcoin may not be mere opportunism amid the global market meltdown.

In March 2018, he pointed to “digital scarcity” as being the coin’s “fundamental innovation” in his testimony at a hearing on the future of crypto regulation in the U.S.

In fall 2019, Snowden had hinted he might turn to Bitcoin in order to circumvent the U.S. government ‘s attempt to restrict his access to profits from the publication of his book, Permanent Record.

Moreover, the servers Snowden had used back in 2013 to leak thousands of documents to journalists were ostensibly paid for using Bitcoin, though the whistleblower has voiced concerns over the cryptocurrency, characterizing its blockchain as “devastatingly public.”

In March 2018, he confirmed he had used Monero, and reiterated his support for Zcash as the “most interesting” altcoin then on the market due to its “unique” privacy setup.

“The much larger structural flaw, the long-lasting flaw, is its public ledger,” he said of Bitcoin at the time — with the caveat that he nonetheless “may” have used it to buy server infrastructure for his whistleblower activities in 2013.

Trading Volumes Can Move Over — The Hottest Metric Is Now...