Viewed as a sector, decentralized finance (DeFi) has shown a much better performance than the broader crypto market. Data has shown that major DeFi projects such as the Kyber Network, Loopring, Aave, and Republic Protocol have all shown significant returns between 165% and 300% this year, vastly outperforming major players such as Bitcoin and Ethereum.

While decentralized finance has long been touted as the true driving force of change in the crypto industry, the abundance of projects made it extremely hard to track it as a single sector.

However, data has shown that not only is DeFi as a whole thriving but that the projects built to facilitate decentralized finance have been the best performers this year.

When it comes to year-to-date performance, the absolute leader in returns is liquidity provider Kyber Network, with data from CoinCodex showing its KNC token increased in value almost 313% this year.

LEND, the native token of the Aave platform, increased by 287% since the beginning of the year, while Loopring’s LRC saw its value jump 265%.

These coins have benefited from a parabolic explosion in the number of DeFi users, something that has been observed by crypto investor Spencer Noon. 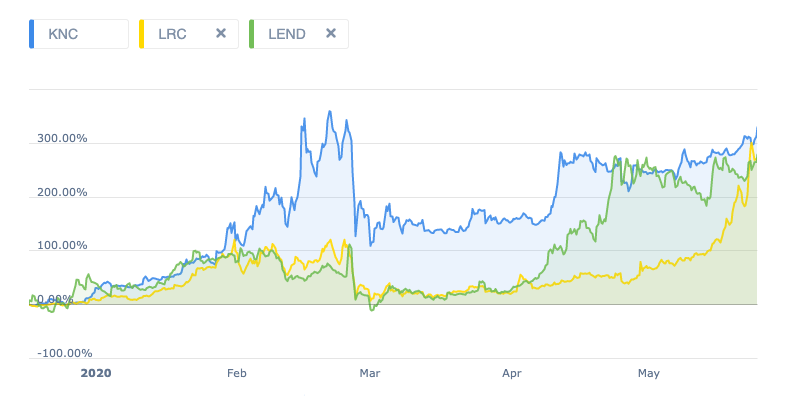 Outperforming BTC and ETH Might Bring More Investments to DeFi

Decentralized dark pool exchange Republic Protocol was also among the top performers in the DeFi sector, showing returns of over 171% since the beginning of the year. Smart contract platform Bancor Network saw its BNT token grow 196% this year, data from CoinGecko has shown, while GNO, the native token of the Gnosis protocol, grew 188%.

On the other hand, two of the largest cryptocurrencies on the market, Bitcoin and Ethereum, have both shown much smaller gains of 32% and 84%, respectively.

And while massive gains aren’t a new thing in the world of altcoins, where some saw returns of several thousand percents during the 2017 ICO boom, the steady growth these projects have experienced might indicate that this is more than a passing fad.

When combined with the fact that DeFi protocols have vastly outperformed the investor favorites Bitcoin (BTC) and Ethereum (ETH), it could lead to more institutional investors coming into the DeFi space both for diversifying its assets and utilizing the projects.

DeFi Is Like Nothing Regulators Have Seen Before. How Should They Tackle It?

Newest Crypto - October 19, 2021
0
Without those pressure points, things will get tricky. “It’s going to be very difficult to regulate DeFi. Much harder than crypto,” says Katherine...

Facebook’s Calibra Has 50 New Jobs in the Pipeline for Its...