Ethereum’s Vitalik Buterin lamented what he regards as an example of the “Justin Sun dictatorship,” after the TRON (TRX) founder was implicated in yet another plagiarism controversy.

A recent rebranding of the BitTorrent File System (BTFS) was met with outrage by Juan Benet, creator of IPFS — or Interplanetary File System. Benet pointed out similarities between the new BTFS logo and that of IPFS, and alleged that the similarities don’t stop there. He tweeted:

“Aaaaaahahaha it’s not enough to fork all our code, rebrand it and lie its theirs; copy paste random chunks of our papers, and defraud their investors with a nonsensical mishmash. Tron also can’t even think of an original logo.”

The BitTorrent Inc Twitter account sprung into defense mode, stating that IPFS should be grateful that BitTorrent has paved the way in the distributed file sharing industry:

“It’s not cool to accuse #BitTorrent, whose been around for decades perfecting our technology. #IPFS should be grateful BitTorrent lead the way as a leader in this industry to pave way for others to follow. We should be united!”

Ethereum creator Vitalik Buterin chimed in on the dispute, decrying the zombification of BitTorrent under the leadership of Justin Sun:

“This tweet is honestly painful to read. It’s like looking at a zombie: the account *looks like* something you’ve grown up with and known and loved for 15 years, but underneath it’s just, well, now it’s just another appendage of the Sun dictatorship.”

Justin Sun’s initial foray into the cryptocurrency space with Tron (TRX) was met with similar controversy after sections of the Tron whitepaper were shown to have been lifted wholesale from those of Ethereum, Filecoin and IPFS’s BitSwap.

Buterin defended his use of the word “dictatorship” by pointing to a tweet thread from March which highlighted Tron’s recent takeover of Steemit: 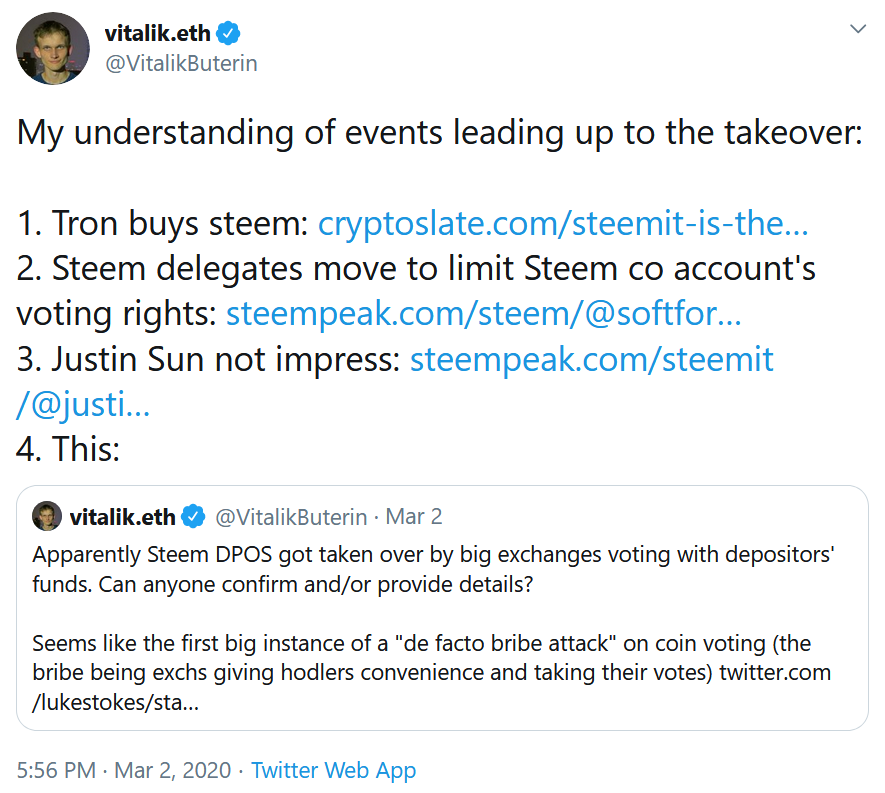 In the months since Sun acquired Steemit, yet more accusations have been leveled at the Tron creator, including charges of outright bribery and large scale censorship.

In 2019, ex-BitTorrent executive Simon Morris fired parting shots at Sun on his way out of the company, comparing Sun’s approach to that of Donald Trump. Morris dismissed the tech behind the Tron blockchain, calling it “a marketing machine layered on a very thin veneer of technology.”

An Emotional Rollercoaster For Crypto Investors