Bitcoin has been on an impressive run over the past few weeks, mounting past resistance after resistance despite a harrowing macroeconomic backdrop. Since the March lows of $3,700, BTC is up 150%, a stellar performance that puts almost any other $100 billion+ asset to shame.

Although impressive, Bitcoin continuing to set new local highs and holding above key support levels has allowed the cryptocurrency to print a confluence of extremely positive technical signs.

This trend continued on May 1st when Nunya Bizniz, a Bitcoin chartist and analyst, observed that the signal that preceded some of Bitcoin’s most important rallies over the past few years has just been spotted again.

Because Bitcoin’s value is largely derived from its network effect — which suggests that the value of a good or service is directly related to the number of consumers, often on an exponential scale  — BTC has long traded in a parabolic fashion.

Just look to the asset’s chart, which is filled to the brim with parabolic rallies and parabolic crashes, much unlike the slow-and-steady price action most often seen with traditional asset classes like stocks and bonds.

This has made the Parabolic Stop-and-Run Reversal Indicator (PSAR) a natural fit for analyzing Bitcoin, according to a recent observation by Nunya Bizniz. 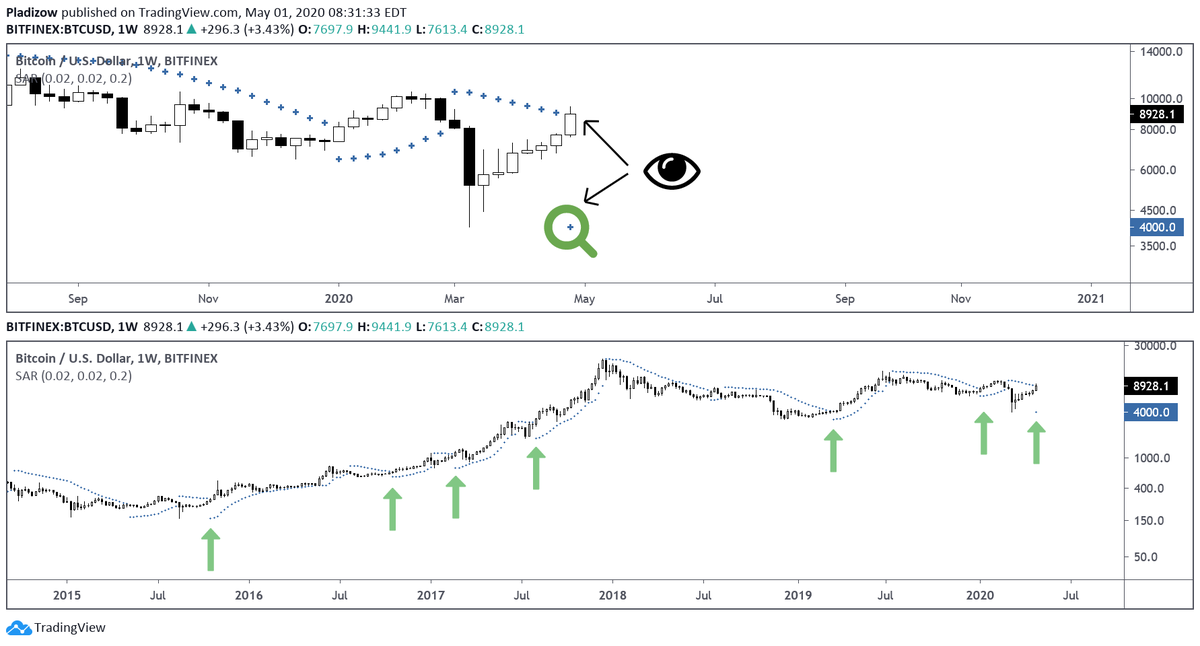 Referencing the chart seen above, he explained that in the wake of the six times this indicator has appeared in the past five years, Bitcoin saw “substantial upside.”

History repeating will see Bitcoin strongly break to the upside yet again in the coming weeks. Accentuating how strong this sign could be, Bizniz rhetorically asked: “Can this be interpreted any other way than bullish?”

Yet the PSAR flipping bullish is only one sign of many indicating that Bitcoin may soon benefit from a longer-term bull trend.

For one, Bitcoin’s strong rebound in April saw the cryptocurrency close its monthly candle above a key level of the Ichimoku Cloud on the one-month chart.

This is relevant for BTC because the last time Bitcoin claimed this technical level was in early 2016, when the cryptocurrency was trading around $500 and prior to the 4,000% rally that brought the cryptocurrency to $20,000 just 20 months later.

Adding to this, one trader noted that the leading crypto recently broke above a rising wedge formed from March’s lows until now. This is the exact same pattern hat marked the start of 2019’s bull run, which brought prices from the $4,000s to $14,000 in three months’ time.

Ethereum Founder Vitalik Is Steering Clear of Yearn.finance Until It “Settles...