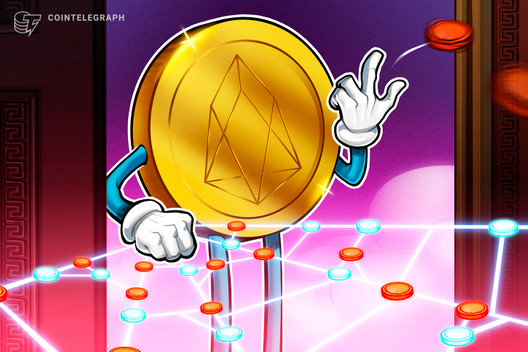 In an unprecedented move, Block.One announced on April 8 that it would begin voting for block producers, or BPs. This marks a clear change in the company’s policies, which previously went to great lengths to dissociate itself from EOS.

Block.One’s stake amounts to slightly less than 10% of all EOS, which makes it the single largest stakeholder in the ecosystem. This gives it vast, though by no means unlimited, power when choosing block producers.

But unlike some other blockchains like Steem, where the relationship between the community and the founding company was tense, block producers on EOS seem to be not threatened at all by Block.One. The network stakeholders Cointelegraph spoke with were all in support of its voting initiative.

Is this directed against exchanges?

One explanation that is circulating in the community is that Block.One will use its stake to hinder block producers managed by exchanges. As of press time, Huobi, OKEx and Bitfinex are actively producing blocks, while Binance is a strong candidate just below the top 21.

This theory is supported by Sergey Vasylchuk, the CEO of Ukraine-based block producer, AtticLab. He explained:

“Judging from their statements and from what I’ve seen from public sources, they will not support exchange block producers.”

Vasylchuk was overall quite negative about the concept of exchanges voting for block producers:

“Exchanges broke the entire concept of proof of stake, because they don’t suffer if the token falls in price. If the exchange makes a mess that results in the price falling, then its users will suffer, but the exchange itself will not. To me this means there’s no ‘skin in the game.’”

He nevertheless conceded that this is more of a theoretical issue. “I don’t know of any exchange that would actively want to hurt the network,” he added.

However, Yves La Rose, CEO and founder of EOS Nation, disagreed with the idea that Block.One would be opposed to exchanges:

“I don’t believe that to be the case. Brendan Blumer [Block.One’s CEO] has publicly on multiple occasions said that exchanges are allies. Exchanges are key stakeholders within the ecosystem — the greater blockchain ecosystem, not just EOS.”

La Rose believes that exchanges have many positive effects on the crypto ecosystem and are the first point of entry for new users. Even if EOS Nation is one of few “indie block producers,” as referred by Vasylchuk, La Rose is positive about exchanges entering the BP ecosystem.

Paolo Ardoino, the CTO of Bitfinex, also does not believe Block.One is moving against exchanges:

“I don’t think that’s the motivation behind this. But it is possible that Block.One would want to ensure enough diversification between BPs, to make the network more resilient.”

The community seems to want this

The situation draws some parallels with the recent Steem governance scandal, where the community felt especially threatened by potential misuse of the stake owned by Steemit Inc. and its new Tron-affiliated owners.

By contrast, the EOS stakeholders expressed no major concern whatsoever. Part of that may be due to the relatively small size of the stake, with Vasylchuk pointing out that more than 300 million votes are required to become an active BP.

Block.One’s stake of 96 million EOS would be just one sixth of all delegated tokens, which “can’t significantly alter the balance of power.”

Ardoino also thinks that “Block.One has positive intentions with this decision.”

“As we have more exchanges participate and as Block.One participates, the stake of each large player in relation to everybody else goes down.”

Vasylchuk further referred to some instances where the community actually wanted Block.One to be more active:

“There are always complaints being thrown along the lines of, ‘Guys, you created this network, you shouldn’t be so indifferent to it.’”

In truth, Block.One would probably never admit to creating the network, with Vasylchuk blaming lawyers for that. “I think that the more expensive the lawyers it hires, the more likely it is that a blockchain company would fail,” he added.

Ultimately, La Rose revealed that the EOS community is tightly knit, and all stakeholders — including exchanges — are always communicating. Due to the way the voting system is set up, every block producer needs to be at least tolerated by everyone else.

Such gentlemen’s agreements are often at the core of any cartel structure, and the information plays into what Ardoino believes to be the primary reason that Block.One is entering the field — a deterrent to prevent BP cartels from forming.

However, when asked about that, many of the EOS block producers interviewed were unfazed at the allegations. As noted by Vasylchuk:

“Blockchain can’t change human nature. People will still be inclined towards collusion, and I haven’t yet seen any blockchain system that fixes that.”

Though La Rose referred to EOS as simply having a plutocratic form of governance — where power is based on wealth.

The Options Market Thinks Bitcoin Has a 9% Chance of Hitting...