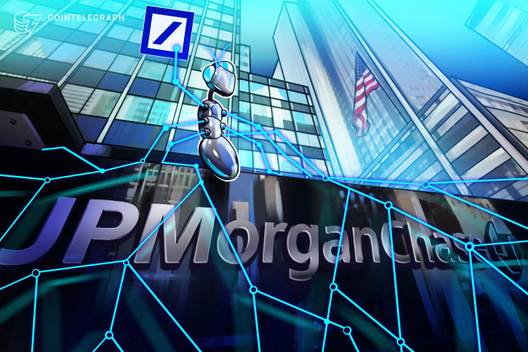 Launched as a pilot in 2017, the JPMorgan-led blockchain initiative now has a network of 320 banks that have entered the platform to swap global payments data using the Ethereum network, the Financial Times reported on Sept. 15.

Takis Georgakopoulos, head of payments at JPMorgan, expressed hope that Deutsche Bank will be the first of several other large banks to join IIN. According to the report, Deutsche Bank is the world’s biggest clearer of euro-denominated payments.

IIN will enable Deutsche Bank to offer better client services, according to the bank’s global head of cash management Ole Matthiessen. Matthiessen, who occupied the position in March 2019, explained that the bank expects IIN to reduce the cost of processing difficult payments.

The IIN network is based on the JPMorgan-developed Quorum platform and intends to tackle the major challenges of sharing information between banks and speed up transactions to recipients. Quorum is based on the Ethereum blockchain, which was recently reported by co-founder Vitalik Buterin to be almost full as it is the most popular public blockchain network for decentralized apps.

According to Georgakopoulos, JPMorgan aims to reach 400 agreements with banks by the end of 2019 and is also expecting to announce other large banks in the near future.

As reported in June, JPMorgan is expecting to pilot its own cryptocurrency JPM Coin by the end of 2019. Recently, JPMorgan CEO Jamie Dimon supported the much-discussed crypto project Libra, claiming that the stablecoin does not pose a threat to banks in the short term. Meanwhile, Deutsche Bank is one of the 26 global central banks that will meet with Libra founders to discuss its purported financial stability risks tomorrow in Switzerland.

Nvidia Redesigns Graphics Cards to Limit Their Use in Ethereum Mining