Both data and first-hand accounts from industry insiders indicates that an interest in Bitcoin (BTC) from institutional investors is accelerating at a rapid pace. This has led some to conclude that the “perfect storm” is about to hit the market.

Price is not a factor

Grayscale Bitcoin Trust, or GBTC, an exchange traded vehicle backed with Bitcoins, has been growing steadily in size over the past several years. However, in the last couple of months, its growth has begun to accelerate. Interestingly, the fluctuation in the price of the underlying asset does not seem to affect this growth pattern. This makes sense, considering that investors have a minimum lockup period of six months.

What makes GBTC an important driver of the market dynamics is not only the fact that, according to its spokesperson, over 90% of the inflows come from the institutional players:

“Since inception, 90% of inflows into our family of products comes from institutional investors”. 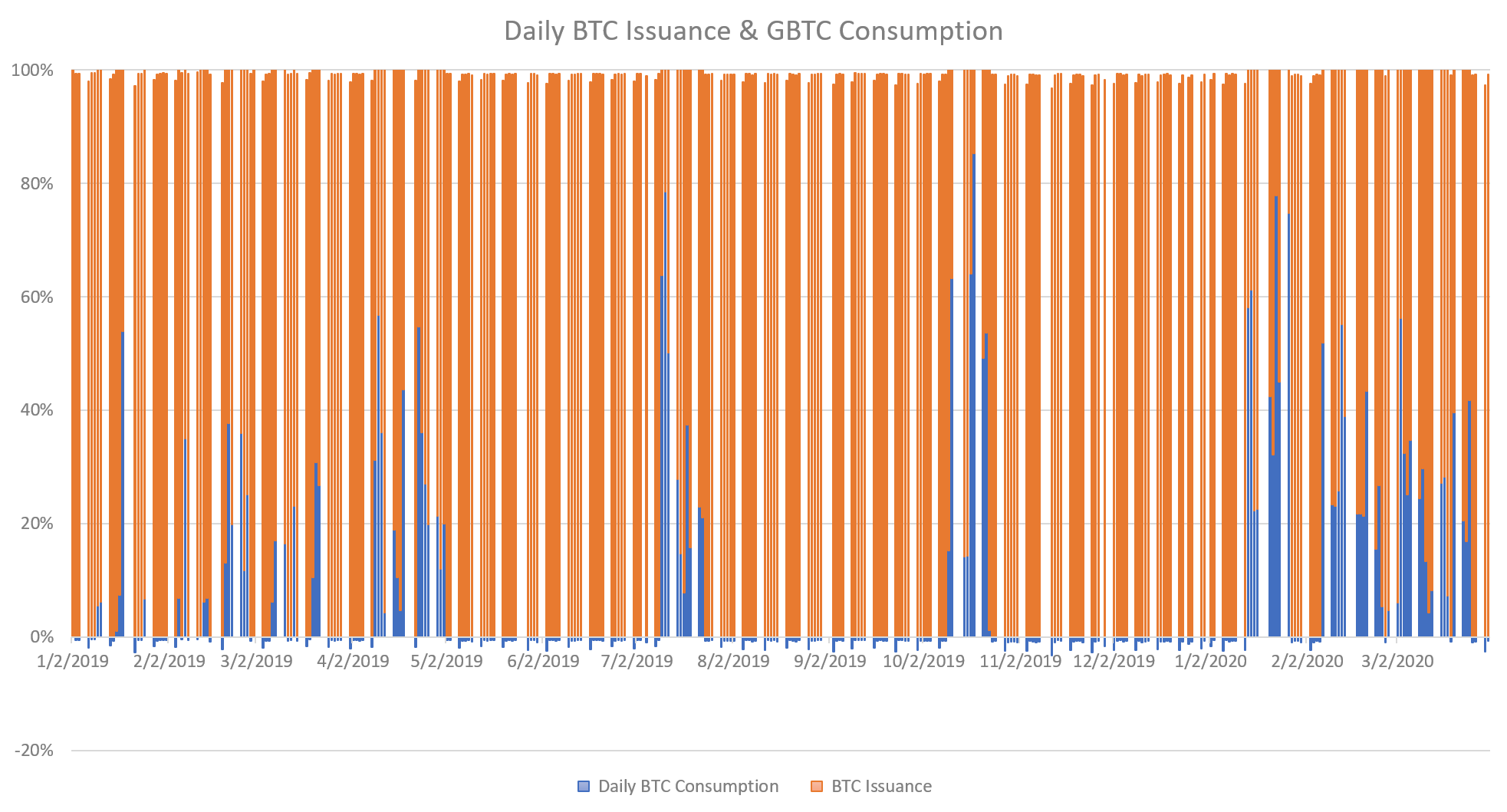 In the last three months, the pace at which institutional investors have been investing into GBTC has tripled. If this trend continues, then in another three months, it will be holding 400, 000 BTC, and in another 6 ½ months after that — March 2021, it will accumulate around 550,000 BTC or 3% of the total supply.

Furthermore, if this forecast comes to fruition, it will imply that GBTC will be gauging up 75% of all newly mined Bitcoins during this timeframe.

It is not clear whether this trend was spurred by the halving, but the metric itself is confirmed by other sources. Alex Mashinsky, CEO of Celsius, the crypto lending platforms that currently holds 55,000 BTC, told Cointelegraph:

“We now have over 260 of them [institutional borrowers] and we did close $10B in loans since launch. The price of BTC does not matter, what matters is volatility of prices going up and down.”

He also added that he could easily lend out another 100,000 BTC if he had it; this is despite the fact that Celsius charges 5 to 12 percent annual interest rate.

Zac Prince, CEO of BlockFi, another crypto lending platform, although the company does not disclose its data publicly, told Cointelegraph that he expects the surge in institutional interest to continue:

“The volatility that characterizes it as a risky investment by some in normal market conditions, has now empowered it to recover faster than any other asset following the initial markets-wide downswing in March – it’s now up 94% since March 16th and continues to climb. We expect to continue to see institutional interest in this asset rise steeply in the next few years accompanied by wider mainstream consumer adoption.”

It’s important to note that unlike Grayscale, platforms like Celsius and BlockFi, probably do not drive the price up, as they do not take their Bitcoins out of circulation; on the contrary, they foster market liquidity.

Another improvement to the supply side of the equation is expected to come from the purging of the mining industry. With inefficient miners leaving the network, the remaining ones will become more profitable and will be able to sell less of their Bitcoins to sustain the operations, reducing the supply.

“Most funds and hodlers, they’re not shorting really. All of them are long. Most funds are long only. My fund is long only. I’m managing a 15 million and I’d say we’re a decent sized fund. <…> I had a call, MultiCoin two days ago. I had a call with BlockTower last week. So I’m in discussion with all the other funds. And it’s everyone for the most part is long-only on Bitcoin.”

He believes that the combination of the central banks injecting trillions of dollars into the economy and the diminishing issuance of new Bitcoins because of the halving is creating a “perfect storm”:

“You inject two trillion. Maybe they’re going to have to inject more based on how the economy is. <…> A lot of money is going to get injected. And it’s creating a perfect storm for Bitcoin.”

Bloomberg analyst, Mike McGlone, believes that the mainstream adoption will lead to the SEC’s approval of a Bitcoin electronically traded fund, or ETF, in the near future:

If this trend continues, data seems to suggest that Bitcoin’s price could appreciate in the next 12-18 months. As D’Souza summarized it:

“What moves price is net fiat in a net fiat out every day. Bitcoin is trading a couple billion in volume that doesn’t move price.”