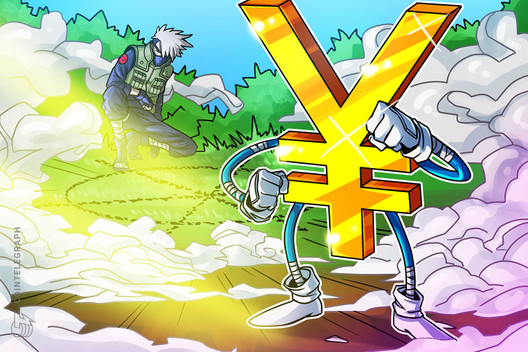 China continues to pull ahead in the central bank digital currency race as more details on its secretive digital yuan project intermittently surface. As a result, more countries are beginning to worry about the potential implications.

Over the past few weeks, a number of Japanese lawmakers have publicly expressed their preference for a CBDC controlled by the Bank of Japan. The general idea is to counter the soon-to-be-released digital yuan from neighbouring China and prevent it from disrupting the global economy.

According to a senior ruling party lawmaker, the development of a Japanese CBDC might take “two to three years.” Will it come too late to serve as a challenge for Beijing? What might a BoJ-issued currency look like?

Bank of Japan vs. CBDC: A preference for cash

The Bank of Japan’s relationship with CBDCs can be traced back to April 2018, when the agency’s Deputy Governor Masayoshi Amamiya first addressed the topic publically. Although the tone of his comment was predominantly negative, the official did not rule out the possibility of considering the bank’s own cryptocurrency.

Specifically, Amamiya argued that issuing a CBDC for general use would undermine the existing financial system, as that would allow consumers to open accounts directly at the central bank and hence abandon private banks altogether, putting them at a major disadvantage:

“The issuance of central bank digital currencies for general use could be analogous to allowing households and firms to directly have accounts in the central bank. This may have a large impact on the aforementioned two-tiered currency system and private banks’ financial intermediation.”

The central bank’s representative concluded that although his agency was not considering issuing its own virtual currency, it nonetheless realized that the application of emerging technologies was a possibility.

Half a year later, in October 2018, Amamiya reiterated his mostly negative stance toward CBDCs. He claimed that such digital currencies are unlikely to improve the existing monetary systems, adding that the central bank does not plan to issue a CBDC that can be widely used by the public for settlement and payment purposes.

During his speech, Amamiya panned the idea of CBDCs as a tool for central banks to control the economy once interest rates fall to zero. According to this theory, a state-controlled digital currency can empower central banks to charge more interest on deposits from individuals and firms, which would in turn induce them to spend more money, thereby stimulating the economy. Notably, Japan was one of the first countries to introduce negative interest rates back in 2016, along with the European Central Bank.

Thus, the BoJ deputy governor claimed that charging interest on CBDCs would only work if central banks eliminate fiat money from the financial system, which is not an option for Japan, where cash is still a popular method of payment. Otherwise, the public will still continue converting digital currencies into cash in order to avoid paying interest. Amamiya went on to add, “In order for central banks to overcome the zero lower bound on nominal interest rates, they would need to get rid of cash from society.”

In February 2019, the Bankof Japan published an extensive report covering CBDCs. The document, authored by a BoJ official and a University of Tokyo professor, studied different ways to implement a CBDC and the hypothetical consequences of those approaches. Specifically, the report focused on two types of CBDCs that had been previously categorized by the Bank for International Settlements: one type accessible to the general public for daily transactions (like banknotes), and the other used for large-value settlements (central bank deposits) only.

Echoing Amamiya’s concerns, the paper’s authors argued that CBDCs of the latter kind wouldn’t improve the current monetary system, and focused primarily on the first kind in their analysis. The report also noted that blockchain could be used for a token-based CBDC.

Finally, in July 2019, Amamiya once again said that countries issuing CBDCs with a negative interest rate would force the public toward cash, while eliminating physical money is not an option.

In 2020, a year that has already been remarkably eventful in terms of global crypto adoption, Japanese lawmakers returned to the idea of a CBDC. The wave of renewed interest was started by a parliamentary group comprised of around 70 members of the ruling Liberal Democratic Party who are alarmed about the prompt development of the digital yuan in neighbouring China.

Earlier in January, the People’s Bank of China reportedly accomplished the top-layer design and joint testing of its soon-to-be-released CBDC. The idea that China could compel other countries to digitize their currencies has been widely discussed since Libra’s announcement in Summer 2019 apparently prompted Beijing to speed up the development of its digital yuan. A common theory is that China can jumpstart its CBDC via its “Belt and Road” initiative, using it to maintain trade relations with a number of friendly developing economies.

Norihiro Nakayama, parliamentary vice minister for foreign affairs and a key member of Japan’s Liberal Democratic Party, said on Jan. 24: “China is moving toward issuing digital yuan, so we’d like to propose measures to counter such attempts,”

On Jan. 30, the Bank of Japan’s Amamiya continued the discussion by stating that the central bank must be ready to issue a CBDC if public demand spikes due to rapid technical developments.

Amamiya did not retract his previous claims about such digital currencies, as he stressed that the issuance of CBDCs would not drastically impact the effectiveness of monetary policy and its effect on interest rates, asset prices and bank lending. However, the BoJ official focused on technical innovations within settlement systems that CBDCs might entail: “The transmission mechanism […] could become more complicated and difficult (to break down) if settlement systems change.”

Amamiya clarified that the institution still has no imminent plans to issue a digital currency, as it continues to assess potentially overlooked implications for monetary policy, as well as security issues. It is “very important” for BoJ to continue studying the possibility of issuing CBDCs, he added.

On Feb. 7, Akira Amari, former economy minister and a member of the ruling Liberal Democratic Party — led a group of lawmakers calling on their government to push for digital currencies to be placed on the G-7’s agenda this year. The 2020 G-7 summit will be held on June 10 through June 12 in Camp David, Washington. Notably, Amari and his allies specified the source of their concern — the Chinese CBDC:

“We live in a stable world led by dollar settlement. How should we respond if such a foundation collapses and if (China’s move) gives rise to a struggle for currency supremacy?”

Three days later, on Feb. 10, yet another Japanese lawmaker stepped forward to support the idea of a BoJ-issued digital currency. The head of the banking and finance system’s research commission at the Liberal Democratic Party, Kozo Yamamoto, said that Japan should create a digital yen currency, hopefully “within two to three years.”

Is Japan too late to the party? Experts think not

Jeff Wentworth, co-founder of Tokyo-based blockchain tooling startup Curvegrid, believes that issuing a digital yen would be a logical step for the local central bank. He told Cointelegraph that, “Every economy needs a CBDC, much as almost every economy made the move from paper money to electronic banking in the 1980s.” However, in Wentworth’s view, Amari might overestimate the influence of a China-issued CBDC, as its performance will likely depend on the currency’s design:

“CBDCs in general will upset the current status quo, but it’s hard to say what impact the digital yuan in particular will have on the global currency balance. A key consideration is how decentralized the yuan and other CBDCs will aim to be. If kept mostly centralized, they will be CBDCs in name only and not much different from the current state of electronic money. Greater change is likely to be driven by CBDCs which adopt a more decentralized approach.”

Maurizio Raffone, chief financial officer of blockchain firm Credify, who is also based in Tokyo, shared a similar sentiment, arguing that the digital yuan might fail to dethrone the American dollar in the near future:

“At least in the next few years I don’t see a digital Yuan replacing the USD. China would need to remove currency controls on the Yuan (as it would be pegged to the digital Yuan), implying some degree of loss of control over monetary policy, which is something the Chinese government simply won’t do.”

Nonetheless, Raffone added that the BoJ is overdue for a CBDC since its loose monetary policy has run out of room, and that, “a CBDC could be a great way to improve monetary velocity in the Japanese economy and provide a boost to GDP growth.” He added that Japan should take in the technical and financial consideration into account, elaborating:

“Technically, Japan’s CBDC would be a great tentpole for digital transformation and innovation for all Japanese financial services firms and a way for them to piggyback on the Bank of Japan’s digital currency to push their own product development. Financially, a CBDC could be a huge money saver for banks as well as an effective tool to protect against tax evasion and money laundering.”

Both experts agree that albeit the People’s Bank of China is considered the frontrunner in the CBDC race, it is not too late for the Japanese central bank to start its own digital currency project, as two to three years in global financial market terms is still quite fast.

As for the United States, its officials recognize that the prospect of the digital yuan could be a threat to the USD’s dominance, but prefer to stay on the sidelines for the time being. Earlier this week, Congressman Bill Foster questioned a Federal Reserve official on the matter, and was told that the institution is not yet sure whether deploying such a digital currency would benefit the U.S. economy.

Meanwhile, China continues to finalize its CBDC project, leaving other countries behind. On Feb. 12, the Financial Times reported that the Chinese central bank has filed more than 80 patents related to its undisclosed plans to launch the digital yuan and the way it integrates with the banking system.