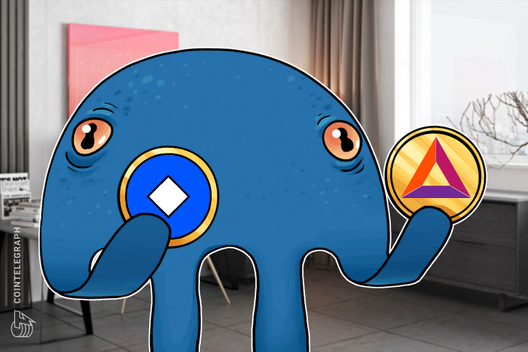 According to an announcement on Aug. 21, the exchange’s users will be able to deposit, withdraw and trade both assets starting Aug. 22. Kraken will roll out trading pairs between BAT and WAVES and Bitcoin (BTC) and Ether (ETH,) as well as with fiat currencies such as the euro and the U.S. dollar.

“The first trade executions will take a bit longer because sell orders cannot be placed until deposits are credited,” the post adds.

BAT is an Ethereum-based token and the native token of the blockchain-based decentralized internet browser Brave. It is designed to improve how content creators are paid and how users see ads.

At the time of publication, BAT has a market capitalization of over $233 million and is trading at about $0.182 — up 1.17% over the past day, according to data from CoinMarketCap.

WAVES powers the Waves blockchain, a platform that allows users to build their own custom tokens and is touted to become the fastest blockchain in the world. Currently, WAVES is ranked the 47th-largest cryptocurrency by market cap, which is $121.8 million at press time. WAVES is trading at $1.22, down 2.20% on the day.

Earlier this week, Nelson Minier, the head of over-the-counter (OTC) trading at Kraken, said that the OTC desk’s trades per month have increased by a factor of 20 since the beginning of 2018.

Kraken is a major North American cryptocurrency exchange founded in 2011 and based in San Francisco. It is the 59th-largest crypto exchange overall, according to data from CoinMarketCap, with a reported 24-hour trading volume of $189.5 million.