Bitcoin (BTC) turned 10 years old recently, and if someone were to tell its founder, Satoshi Nakamoto, in 2008 that the new decentralized currency would still be thriving in 2019, he/she/they may assume that the experiment succeeded. However, an idea like Bitcoin is capable of existing even if it isn’t very effective at delivering on its promises, and it just so happens that a decade later, everyone is still knocking their heads against the very first criticism made in response to its white paper.

After Satoshi published Bitcoin’s white paper in 2008, the first person to comment on it publicly was James A. Donald, who opined to the anonymous author, “the way I understand your proposal, it does not seem to scale to the required size.” These were prescient words, yet Donald couldn’t have anticipated how sophisticated the blockchain would need to become to solve it. Bitcoin’s greatest hopes now reside in the Lightning Network (LN) and solutions like it. Even so, it seems as if LN itself may be a problem in search of a solution. Currently, the low rate of use means that operating nodes lose money when they process transactions while an average channel capacity sits at a mere 0.027 BTC (and the average node capacity is 0.216).

A decline in the Lightning Network’s capacity is casting a shadow on Bitcoin’s timely introduction into the mainstream, bringing up some existential questions that may or may not be justified.

A primer on the Lightning Network

By using the slower Bitcoin blockchain as a foundation instead of a main transaction processor, the LN essentially borrows Bitcoin’s immutable and trustless aspects without impacting its speed in a significant way. The Lightning Network exists as a sidechain in which two users can create a private payment channel between themselves, which acts as a balance sheet that they can conduct transactions on directly. Once they’re done transacting, the final balances of the two addresses are reported to the mainchain as a single transaction. 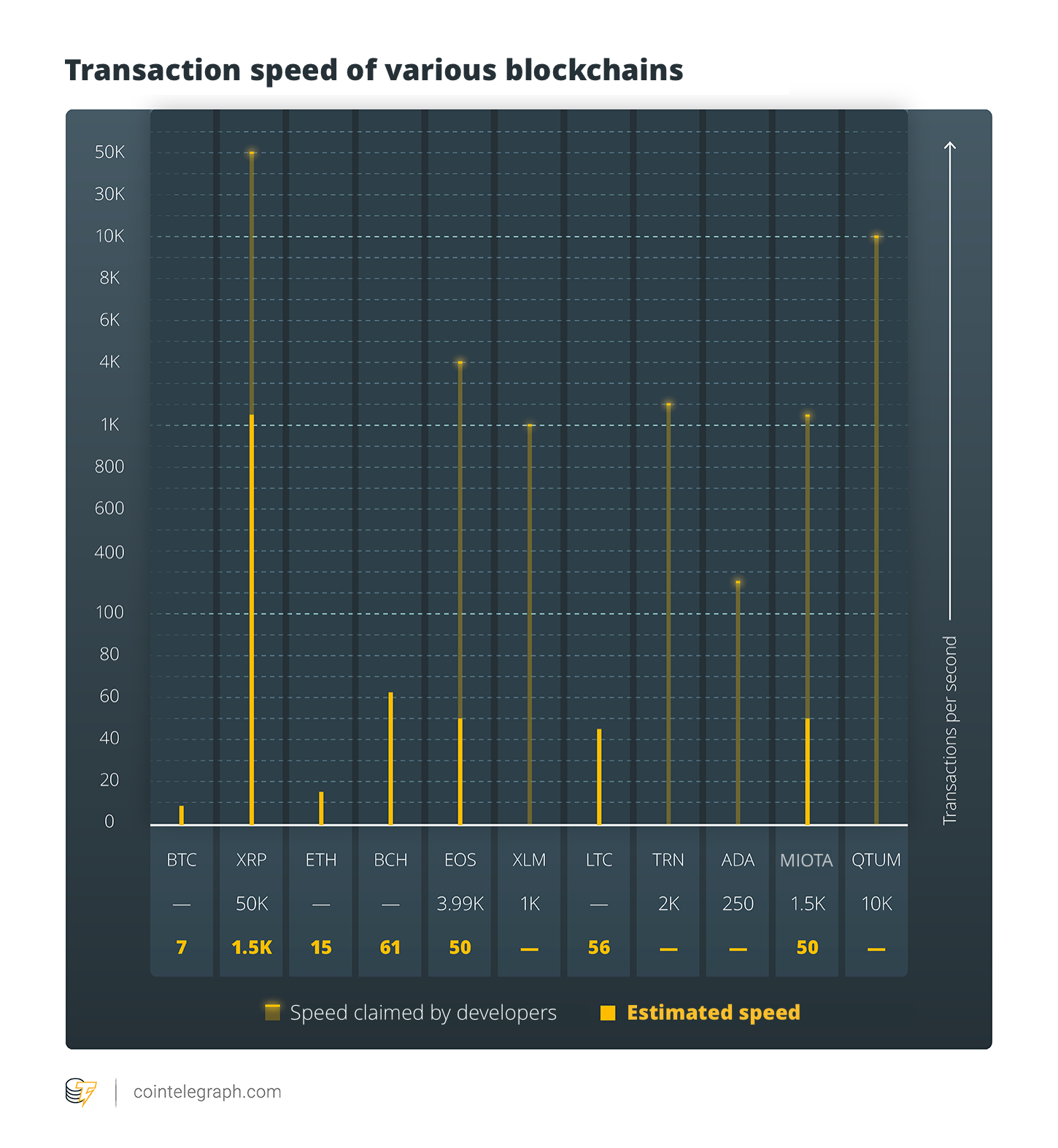 Such significant increase in the network’s speed is possible because Bitcoin is immediately available to be moved between users on the LN — there’s no need to wait for the network to verify and process each transaction as it’s received. The Lightning Network’s speed is therefore directly related to how many people are supporting it by contributing their BTC.

Called “network capacity,” the total value of Bitcoin inside LN channels at any moment is now dropping. In the beginning of 2019, the network was pushing 1,100 BTC, but, at the time of writing, the capacity of all LN payment channels equals to around 854 BTC, having dropped steadily since May 2019. One reason for this decline is the rise in BTC prices, which were in the throes of a severe bear market for most of Lightning’s existence until May 2019 recovery. The graph below illustrates this well. 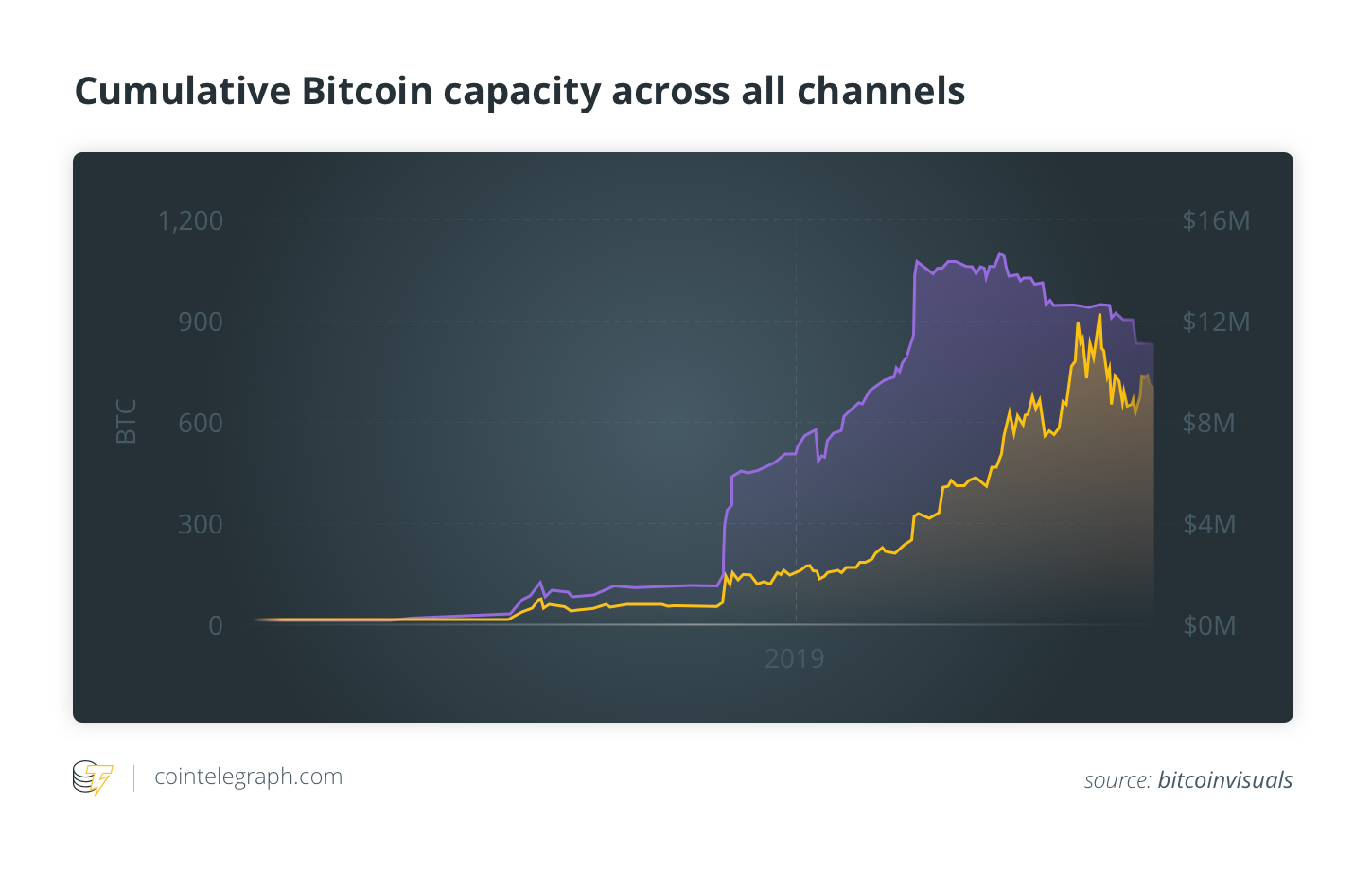 One can see the United States dollar value of the LN increasing (orange) while the number of BTC available is falling (violet). This means that as BTC price increases, people are taking their coins off the network — likely to sell them and take profits. The same is happening to the Lightning Network for Litecoin. The recent halving of Litecoin’s block rewards is a likely culprit of its steeper fall-off, as this event could reduce the future supply, providing as violent a price boom as it does a plunge in capacity.

Competition is stiff in the scaling game

However, all this may not matter. Because coins like BTC have relative value, people will simply be sending smaller BTC transactions as its price increases. As each channel’s capacity falls due to newer channels being opened with smaller limits, the overall network’s transaction capacity will follow suit. CEO and co-founder of RSK Labs Diego Gutierrez Zaldivar concurs, saying:

“The impact of Lightning’s drop-in capacity is only temporary, and as adoption increases and ecosystem interoperability makes the network as a whole more resilient, events like these will become irrelevant. Since off-chain networks require only a fraction of the value accessible off the chain for day-to-day transactions, this also limits the overall impact of these kinds of shortages for the end user.”

The Lightning Network may yet prove that decentralization can take us all the way there, but RSK Labs is another innovator decidedly taking on the scaling challenge in a different manner. The idea of offloading processes to a sidechain is preserved, but it operates smart contracts that are secured by BTC on the Bitcoin blockchain instead of a rudimentary payment channel. BTC is linked to RSK smart contracts by its one-to-one peg, or RBTC — a sophisticated bridge mechanism that allows scalable applications to be built on Bitcoin for the first time.

Scaling is being tackled in many ways by many different projects. Even Ethereum (ETH) has found a way for people to transact and represent Bitcoin in its decentralized applications with Wrapped Bitcoin (WBTC), which simply uses a smart contract-based price oracle and a one-to-one backing to denominate BTC in ERC-20 financial systems. These solutions all show that there is a lot of work going into the Bitcoin ecosystem, and even if there are stumbles on the way, at least they are stumbles forward.

An existential crisis at scale

Despite its massive popularity in the sector and laurels of the original crypto, Bitcoin is facing somewhat of an existential crisis. Though it has become a widely used investment and speculative asset, it remains far from its goal of a fully decentralized currency used in everyday transactions, hampered by its own design and oversized demand. Even so, new solutions could improve the status quo, assuming they actually solve an existing problem.

As long as transactions on the chain are not more expensive than the Lightning Network’s, users will likely stay on the Bitcoin chain instead of locking up their assets elsewhere. Nevertheless, progress requires innovation, and Bitcoin’s own architecture means it’s resistant to change. By implementing solutions such as LN and preparing to scale, Bitcoin could eventually become the currency Nakamoto originally envisioned.