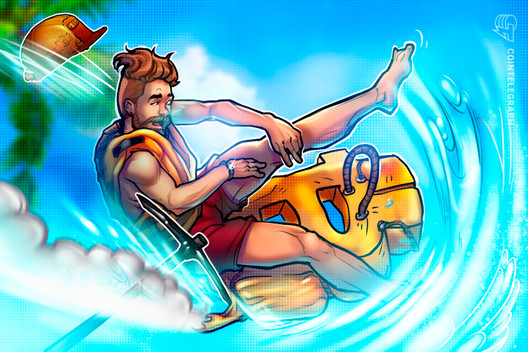 Analytics website Coin Dance reported similar findings, with the 2020 peak standing at about 150 EH/s on March 5 and then dropping to 105.6 EH/s 10 days later, thus showing a 29% decrease.

The combined effects of the hash rate decrease and the ensuing outflow of miners from the market have resulted in arguably one of the biggest blows to the Bitcoin network since 2011. The negative impact is difficult to fully assess at this time. However, the reasons for the slump are disputable and are being attributed to a number of factors — from the upcoming BTC halving and the raging coronavirus pandemic to a worldwide recession causing miners to leave the market.

Why is this happening?

The Bitcoin network’s hash rate is designed in such a way that it adjusts the computational difficulty of the mining process after every 2,016 blocks — which happens about every two weeks. The correlation is directly proportional: If the hash rate goes up, so does the computational difficulty and vice versa. The given measure is designed to increase the challenge of mining blocks, making the process more rewarding.

The 15.5% drop has directly impacted the decrease in mining difficulty from a measurement of 16.5 trillion to 13.9 trillion on March 26, meaning that a large number of miners had disconnected from the chain. Such a turn of events was expected after the past month’s turbulent events, which saw Bitcoin roller-coasting to $3,600, showing a 60% decline. As a result, many miners allegedly found it unprofitable to keep mining and running the equipment, which consumes a lot of electricity.

Are miners really leaving the market?

Hash rates and mining difficulty are directly correlated and have historically been the trendsetters of the so-called “miners’ capitulation cycle,” which signifies that mining is profitable as long as the BTC price remains high. As the computation difficulty rises, miners with low-powered equipment are forced to sell off their assets to keep mining, which leads to an increase in the supply of Bitcoin. When miners are unable to compete, they leave the market, and this leads to a decrease in the hash rate.

Walter Salama, the chief compliance officer of mining company Bitpatagonia, told Cointelegraph that he is inclined to think that the departure of the miners has contributed to the decline of the hash rate:

“All miners invest for a long-term business and contribute to blockchain. The medium to small miners, many are closing, we have all made the same mistakes, we have entered the industry with very high costs of the machines and with a Bitcoin that never stopped falling in value and when we had an attractive price to sell and recover, we did not have stock because we were always forced to badly sell to survive.”

Pierce Crosby, the general manager of TradingView, explained to Cointelegraph that a lot of the volatility of the hash rate is based on programmatic price limits set for different mining rigs. Because of the math on hash rate rewards, the lower the price, the lower the margin per computation, so these rigs will likely slow down until the price rebounds and margins expand, Crosby said.

The theory was put into practice on March 26 and led to a reset of the network’s computation difficulty. As the difficulty shifted downward, the miners’ capitulation cycle closed the full circle. This may continue until only the strongest remain, highlighting one of the fundamental flaws of the Bitcoin network.

However, many experts disagree that the recent BTC hash rate drop has anything to do with miners capitulating. Donnell Wright, a miner and blockchain compliance consultant, told Cointelegraph:

“Miners could be capitulating, but I don’t think that is what is happening now, especially so close to the BTC halving. Usually, after the halving, we end up seeing a huge spike in price, so based on previous data, it would be detrimental to capitulate.”

There could be a number of reasonable explanations, however, as to why the BTC network hash rate has taken a decline, as added by Wright:

“It could be that miners are competing with newer technology, so they may have to shut off current miners to upgrade. It’s also likely that mining operations may be forced to temporarily shut down due to COVID-19, depending on the region. I don’t believe the decline is linked to the halving, which may actually incentivize bigger players to mine — after the fact.”

Vector Moranov, miner and member of the Bitcoin Foundation, noted to Cointelegraph that apart from a direct relationship between the BTC hash rate drop of March 2020 and the Bitcoin price, miners also have fears of an economic crisis that might happen due to the coronavirus pandemic.

A decrease in the hash rate could also be caused by a deficit of miners and the closure of farms and production in China, as well as the rise in the price of the equipment. Over 30% of the mining takes place in China, according to Sidharth Sogani, founder and CEO of Crebaco, a research and intelligence firm focused on blockchain and crypto projects, further told Cointelegraph:

“China being under a lockdown is one of the reasons why the hash rate has reduced because the mining facilities are not operating at its best capacities.”

Sogani added that new ASIC mining machines upgraded specially for the upcoming BTC halving have been affected as well. The pandemic tossed a wrench into the introduction schedule of new mining rigs, resulting in a sell-off of BTC. Considering the immense upgrade of hardware that took place in 2019, the service life of that equipment may be coming to an end, as the almost twofold hash rate increase over the first quarter of 2020 has compressed the operating margins.

In addition, Bitcoin corrected its price by introducing a multiplier effect on low margins, leading to the capitulation of inefficient miners. The monthly production by miners of over 54,000 new Bitcoin every block is also battering the coin’s price, resulting in excess in supply.

The pressure to sell Bitcoin in order to maintain mining equipment is immense, as miners may still try to get significant profit margins. This leads to a “survival of the fittest” situation, as experienced miners with high margins will be accumulating a larger percentage of the newly minted Bitcoin and will not be selling them to maintain their operations.

Despite the technical aspect, the impact of COVID-19 and the sharp drop of the S&P 500 on the BTC’s price are also strong contributing factors that could decrease the interest of miners in the coin. Vincent Poon, a vice president at Bithumb Global, noted the economic situation as the factor that affected BTC’s hash rate most of all. He told Cointelegraph:

“I believe the miners didn’t quit the game, the hash rate drop is due to the global turmoils similar to others assets and the cash out of the Ponzi schemes which there are still a handful of them out there. Historically speaking, halving did increase the price in short term. Miners are well aware of halving and is a calculated risk when they invested in mining machines. Some miners might quit but that also means they got more market share, which is a good thing for the miners in general.”

Everything depends on BTC’s price and global market conditions, as a significant drop in mining difficulty and the possible rise of BTC above the $6,000 mark could still make older mining equipment like Bitmain’s Antminer S9 profitable. The cryptocurrency mining market and miners are very much active, just operating differently, according to Stephen Gregory, the chief compliance officer of crypto exchange CEX.io U.S. He claimed in an email conversation with Cointelegraph:

“Last week, in addition to a monthly CME settlement date, we saw over 50% of open interest options expired in Bitcoin alone. To me, this shows that perhaps miners may take some machines offline to cut costs but are still very much active in the market using the ever-expanding array of financial instruments to hedge their risks effectively. Although the theory of the ‘miner’s capitulation cycle,’ […] still has merit; now that miners can hedge with options and futures, means there is more than one route to generating yield.”

Meanwhile, the situation has led many miners to start switching between the Bitcoin and Bitcoin Cash (BCH) networks to remain profitable. However, that may start changing on April 8 when BCH is set to halve its block reward. The same will happen to BTC on around May 15.

The long-term prognosis is that the hash rate will go up as mining is institutionalized, according to Wright. He told Cointelegraph:

“Enterprises will also continue to find innovative ways to mine BTC without using as much energy and power. This alone might introduce new institutional players into the space, which will allow hash to continue to break all-time highs.”

The derivation of the current situation directly shifts to the near future and poses questions about the state of Bitcoin after the halving if miners are the primary source of sell pressure. Matt D’Souza gave a laconic answer to the rhetorical question in his Twitter post: “50% less potential pressure.” In other words, miners with low margins are immensely affected by any negative price movements and will leave the network.

Some miners share this point of view. The Bitcoin Foundation’s Moranov told Cointelegraph that although some miners will shut down their devices in the short term, there will be a big wave of miners abandoning the market in the long run if the decline continues, especially because of Bitcoin’s halving.

However, many experts have also suggested positive scenarios. Miner capitulation has historically been a buy signal, and a bull market always follows periods of recession, as the post-Bitcoin-halving world could see an outflow of miners and a reward redistribution under lower sell pressure — which could potentially result in a Bitcoin price increase.

Sogani told Cointelegraph that although Bitcoin’s price may fall right away. In his opinion, BTC should break its all-time price high in no more than six months time, adding:

“That’s not because of the halving but because of excessive printing of money by the central banks globally to combat COVID-19 and control the recession. Printing of money does help in the short run, but in a few months, we will see that this recession will turn into a depression which will last for over 24 months.”

Wright also shared with Cointelegraph his positive prognosis on post-BTC halving prices, saying that in the long term, the decline in the hash rate will not have an impact and that a price uptrend will accompany volatility after the halving, adding: “The hash rate reached all-time highs in January 2019, and the price was not following, which yielded confusion and then BTC took a trip to $14K shortly after.”

D’Souza gave a more precise prediction, pointing to a period of one year and stating that the “recessions typically suppress most assets — especially risk-on assets, such as Bitcoin. We don’t call bottoms. Historically, during miner capitulation, 12-month returns have been favorable.” However, there are analysts who suggest that the hash rate may further drop. For instance, Crosby opined:

“The deterioration of different coin hash rates is visible to the larger investor community and, behaviorally, creates pessimism about the fundamental value of a currency. If this is ‘acted’ on, then price declines further, and hash rate will further decline as well. Downward spiral.”

Bitcoin Consolidation Uninspiring, But Run To Near $33k On The Cards