The latest version of a popular and thus far accurate Bitcoin (BTC) price model predicts an average price of $288,000 — and it could happen this year.

In a blog post introducing the third incarnation of the stock-to-flow (S2F) model on April 27, analyst PlanB revealed fresh calculations that are taking his forecast ever higher.

This time, gold and silver joined in, combining with BTC to create the new BTC S2F cross-asset model or S2FX.

Stock-to-flow calculates a value based on the supply of new Bitcoins entering circulation through mining versus the existing supply, or “stock.”

The retroactive application confirms that the model is extremely competent at charting Bitcoin’s growth, with even last month’s 60% drop still falling within its predicted range.

Prior to S2FX, an “updated” stock-to-flow chart put BTC/USD at an average of around $100,000 between 2020 and 2024. With the release of the new version, however, the prediction has almost tripled overnight. 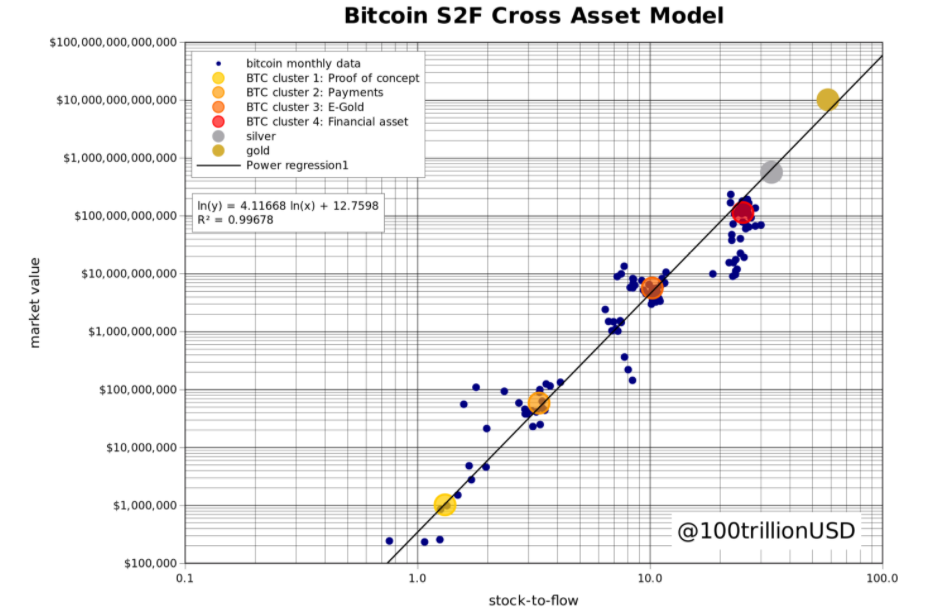 S2FX introduces the idea of “clusters” for Bitcoin as it moves between various use cases.

According to PlanB, the cryptocurrency has already been considered as a “proof of concept,” for “payments,” as “E-gold” and currently as a “financial asset.” Each tag accompanies a “cluster” of price points on the S2F chart, and each cluster gives a markedly different price forecast.

“Each of the four identified BTC clusters has a very different S2F-market value combination that seems to be consistent with halvings and changing BTC narratives,” he continued.

So far, it is the “financial asset” cluster which has produced the largest S2F value and market value — 25.1 and $114 billion respectively.

The update was not without its detractors. Having previously criticized earlier work, the high-volume Bitcoin trader known as J0E007 took a fresh swipe at stock-to-flow, arguing that PlanB should include more “assets” such as controversial altcoin, Bitcoin SV (BSV).

“I think PlanB made a step in the right direction by including more assets in his model. Solid work,” he tweeted on Tuesday.

As soon as S2FX is confirmed for a wide range of assets like Pt, W, $BSV and $BCC, it will have my enthusiastic support. Highly scientific!

In further comments, J0E007 claimed that Bitcoin’s upcoming halving is already “priced in” to BTC/USD, and that next month’s event will precede a price crash.

Ethereum co-founder Vitalik Buterin meanwhile is also among those with reservations about stock-to-flow.