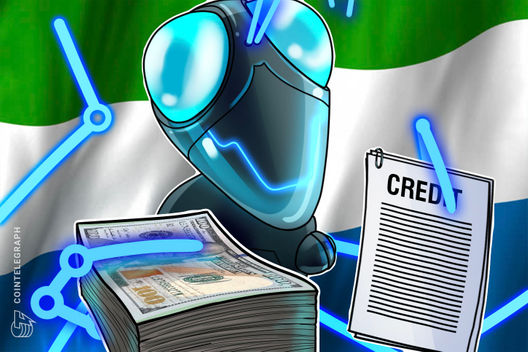 San Francisco-based nonprofit Kiva, a company that crowdfunds loans for financial inclusion, has launched a blockchain platform for credit history with the government of Sierra Leone.

According to a Reuters report on Aug. 21, Kiva and President of Sierra Leone Julius Maada Bio jointly launched the blockchain initiative in the country’s capital.

The platform will use biometric data collected by the government, such as fingerprints, in order to access the credit history of citizens in the country. This will purportedly give a way for lenders to obtain citizens’ credit history.

Individuals looking to borrow money would have a digital wallet for loans and their transactions would be recorded on a blockchain. The digital wallet will be provided through an app and its partners will purportedly provide mobile wifi hotspots to ensure that users have access to the internet.

According to the Information Ministry in Sierra Leone, over 85% of the country’s population lacks internet access. Moreover, the country’s central bank states that over 75% of the population is unbanked. Locals instead rely on informal institutions such as community banks, but these organizations either will not share credit information or will do so only for very high fees.

President Bio stated that the government is aiming to have all banks and microfinance institutions in the country set up with the blockchain system by the year’s end. David Sengeh, the head of Sierra Leone’s Directorate of Science, commented:

“Lack of identification, or an inability to verify that identification for credit purposes, increases the cost of business for everyone.”

Bio first announced that the government was working with Kiva on the network at the 73rd Session of the United Nations General Assembly last year.

Banking the unbanked with blockchain apps

As previously reported by Cointelegraph, internet crowdsourcing company Share Internet Data Ltd (SID) and private equity firm LDJ Capital co-launched an app — LDJ Digital — for blockchain-based, digital banking. The stated goal of the app is to provide banking services for all unbanked persons. The app is integrated into the SID platform, which itself is an app that lets users provide temporary internet access to others via mobile devices — similar to a wifi hotspot’s functionality.