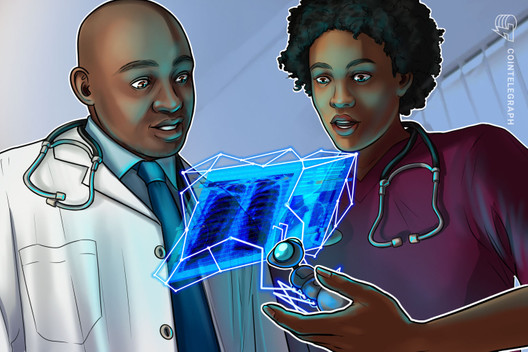 One of the linchpins of the internet is the ability to access and share data seamlessly. Whether it’s financial metrics for an institution or something as innocuous as a meme, the internet’s distinct pathways of protocols and standardization are the ideal medium for exchanging information.

That transmissibility of information has not translated well to specific industries, however.

Regulatory moats, cumbersome and outdated database architecture, and poorly designed user interfaces are a hindrance to major industries — particularly healthcare. Even in the United States, where healthcare standards are high, onerous regulatory processes inhibit the ability of doctors to adequately share patient information across state lines or access sensitive medical data from past care providers.

Related: How Blockchain Will Revolutionize Healthcare

If there’s a silver lining to COVID-19, it’s that it has induced a long-overdue examination of many archaic aspects of the healthcare system. When we apply these lessons to emerging markets, such as Africa, the horizon for change coming out of the crisis looks promising.

The maxim that “every problem is an opportunity in disguise” applies aptly to the COVID-19 pandemic and the overall healthcare situation in Africa — COVID-19 aside. For context, Africa’s healthcare system is overburdened, lacks adequate resources and does not have a unified approach to its myriad endemic diseases ranging from Malaria to HIV/AIDS and Ebola.

World organizations such as the United Nations have taken an active role in bolstering the healthcare system in Africa for decades, but the progress is slow and lacks technological innovation. For example, African countries are making meaningful strides in preventing childhood diseases, with 60% or more children now immunized for measles — largely the effort of nonprofits and the United Nations.

On the contrary, public-private healthcare partnerships remain sparse on the continent (especially with foreign companies), yet they represent the greatest opportunity for bringing cutting-edge technologies to African medical facilities. In many cases, these technologies can be as simple as mobile diagnosis tools and more developed IT infrastructure.

The problem isn’t a lack of third-party donations and assistance to the African healthcare system. The same problem that, in many cases, hinders innovative tinkering in the developed world — adequate data sharing.

For example, telehealth was disparaged by many medical professionals in the U.S. before COVID-19. Now, however, it appears that telehealth is here to stay. Some of the early concerns with telehealth (i.e., telemedicine) are well-founded, though. The Health Insurance Portability and Accountability Act standards for privacy and security of patient medical data are embedded into hospital practices and procedures, severely limiting the amount of data that can be shared between medical institutions without cumbersome processes. In addition, many major healthcare institutions in the U.S. rely on disparate IT systems, including non-congruent databases for storing and indexing patient data.

This has profound consequences on data sharing in the medical community.

Some medical providers may even be unwilling to share data for fear of not being able to control who else the data is doled out to from the initial party offered access. In other cases, the incentive for big data modeling using artificial intelligence is reduced, since it requires unobstructed access to sensitive clinical data by a technology company — further restricting the internet’s capacity to mold medicine for the better.

As a consequence, some medical professionals and institutions are exploring blockchain technology and its concomitant class of developments to tackle the data sharing barrier. And it’s implications present an enormous opportunity for Africa.

Africa’s healthcare infrastructure is not as mature as in developed countries like the U.S., but that may be an advantage. For example, an African medical initiative to build hospitals, research enterprises and other organizations imbued with blockchain tech like secure multi-party computation and reduced regulatory overhead could unleash the floodgates for medical innovation.

In theory, African medical facilities could leapfrog many of the bottlenecks facing Western medical institutions that stem from their entrenched policies and aversion to sharing medical data without myriad regulatory processes. Blockchains are ideal for the secure sharing of sensitive data, and can even be imbued with advanced privacy-preserving primitives like zk-SNARKS to further obscure sensitive medical data.

While Africa’s limited medical infrastructure may have formerly proven an obstacle, when paired with dynamically growing technologies in the blockchain arena, it can catapult to a competitive landscape of innovation.

The continent is even showing signs of early success in combating COVID-19, largely drawing from its experience with Ebola. Surveillance has been scaled up rapidly, and face masks and other personal protective equipment are commonplace. A South African team even designed a mesh-network COVID-19 tracing app that preserves privacy — a notable departure from the combined efforts of Apple and Google in the U.S.

Injecting Africa’s experience with data-sharing technology like blockchains would only further bolster the continent’s ability to stifle pandemics in their infancy.

Imagine the scale of intrigue by foreign scientists, AI firms and medical professionals into Africa’s myriad novel diseases and pathogens should the real potential of the internet’s data-sharing capabilities be realized on the world’s fastest-growing and most geographically diverse continent. Data on unique diseases plaguing Africans, such as river blindness, could be seamlessly and securely shared between hospitals, clinics and researchers — enabling real-time improvements in decision-making.

Mobile diagnoses could be uploaded to shared blockchain networks in real time, cryptographically secured, and passed on to third-parties with read-access restrictions baked into the patient data. No need to worry about a Facebook Cambridge Analytica scandal at the medical level in the African sub-Saharan region.

Capital investment would subsequently pour into a region where the regulatory shackles are removed, and technology can flourish independently of government mandates. Interestingly, reduced regulatory overhead may be a direct consequence of COVID-19 as we take measure of our failures to respond to the pandemic. If Africa pursues the fusion of low regulatory burdens and blockchain-based healthcare IT systems, the consequence may have an endemic positive impact.

Africa, and the world, needs more nimble technology for disease monitoring, diagnosing and treatment in the field. The current systems have proven inadequate in the fight against COVID-19, and it’s clearly time for some deep introspection. Africa is a fertile hotbed for exploring the potential of new technologies in the healthcare sector.

But Africans remain firmly skeptical of third-party interference in its healthcare system as well. A murky history of the World Health Organization using Africans for experimental vaccine treatments has eroded trust in foreign aid, and even led to novel strain outbreaks of diseases like Polio, which have been linked to a mutation in a strain of a vaccine. That’s why a more self-sufficient African healthcare system is the ultimate goal, and one that blockchains can help realize.

That’s a promising vision for bypassing many of the bottlenecks facing the medical industry in the West, which has languished in red tape for decades. For a global medical landscape looking to reshape after a colossal disaster, the incentive for letting go of outmoded healthcare solutions and embracing more agile, connected yet less invasive models has never been greater.

Chris Cleverly, a barrister by profession, has made it his mission to help bring development mechanisms to Africa that can empower Africans to seize their own destiny. His journey on this mission began during the 1990s when he attended King’s Law College and became a barrister. After graduating, he founded the Trafalgar Chambers in the United Kingdom and became the youngest head of chambers in over a century. In 2005, he founded the Made In Africa Foundation, an organization he has guided to fulfill his dream of bringing systemic infrastructure change to Africa. Today, he is CEO of Kamari, a blockchain project looking to build an ecosystem of mobile gaming and payments for 1 billion people across Africa.