PayPal is hiring crypto engineers amid rumors of Bitcoin integration

There have been a lot of rumors surrounding PayPal this week. A report suggested that the online payments giant plans to allow hundreds of millions of users to buy and sell crypto directly. Job vacancies for crypto and blockchain experts have added fuel to the fire. PayPal is yet to confirm whether the reports are true — but if they are, it could be a landmark moment in Bitcoin’s quest to go mainstream. As you’d expect, some of crypto’s best-known names saw this as a bullish sign, and they renewed predictions of BTC rallying to $12,000. But some — such as Decred co-founder Jake Yocom-Piatt — are dubious about the rumors. He told Cointelegraph: “PayPal, specifically, is notorious for depriving its users of access to legitimately acquired funds on their platform with little to no justification. Users having their funds restricted in this fashion is something cryptocurrencies are designed to prevent, making this integration, if it is indeed in progress, an odd combination.”

It’s quite rare for the top story of the Financial Times to send shockwaves through the crypto sector — but this week, it has. Wirecard, the troubled fintech company which recently discovered a $2.1-billion hole in its finances, has opened insolvency proceedings. The company powers many of the crypto debit cards in the market, and it’s been struggling to keep up with its debt obligations. Earlier in the week, former CEO Markus Braun was arrested on suspicion of falsifying the embattled firm’s accounts — and was released on $5.6 million bail. Wirecard’s demise is already affecting crypto card users, and a subsidiary responsible for issuing these debit cards has been suspended by the U.K. Financial Conduct Authority. This has meant customers were unable to use them. Crypto.com, one of the companies that used Wirecard’s services, has stressed that its users’ assets are secure — and said funds will rapidly be credited back to crypto wallets. It is now looking for alternative solutions so the cards can be used again.

Saturday saw BTC fall under $9,000 to lows of $8,813 — but it seems buyers have been keen to purchase these dips. Mild pullbacks are common over the weekends as trading volume tends to thin. Cointelegraph contributor Marcel Perlman said the market is in a bit of a neutral zone after Friday’s $1.06 billion BTC futures and options expiry. He explained: “The options expiry did not have a meaningful impact as most of the call options were aimed at $10,000 or higher.” Other threats are on the horizon. There’s a strengthening correlation between Bitcoin and U.S. equities — fuelling fears that BTC is vulnerable to a price pullback. Some, like stock-to-flow model creator PlanB, believe this might not be a bad thing. He said: “I see it as good news. I would be really worried if all these trillions QE money would flow to stocks, bonds, real estate, gold… but not to Bitcoin.” Other crypto analysts are also optimistic. Popular trader SteveCrypt0 said: “We could go as low as 6300 or even dip to 6k and still be bullish. In fact, it would even be a healthy correction right into the golden pocket of the 0.618 Fib level.” 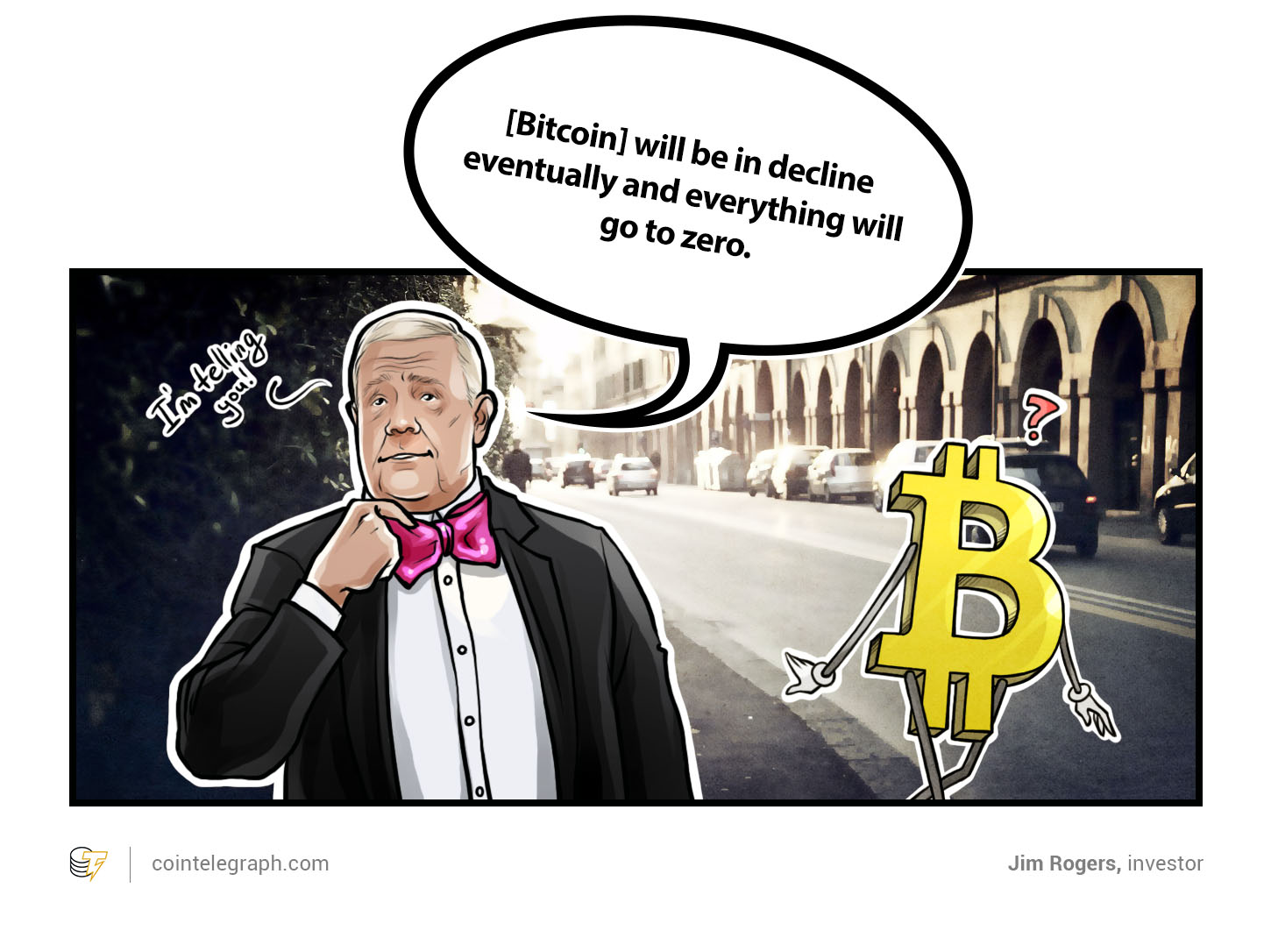 Telegram’s courtroom saga with the SEC comes to a $1.2 billion end

It’s finally over: Telegram and the SEC have reached a settlement. The encrypted messaging app has been in hot water after it raised $1.7 billion in an ICO for GRAM tokens, which the regulator said was an illegal securities sale. Now, Telegram is returning $1.2 billion to investors and has to pay an $18.5-million penalty. The company has already confirmed that the Telegram Open Network is dead in the water. Announcing that a conclusion had been reached, the SEC said: “New and innovative businesses are welcome to participate in our capital markets but they cannot do so in violation of the registration requirements of the federal securities laws.” Unfortunately, it’s not exactly clear how Telegram or other potential ICO issuers can actually appease the SEC at this point.

Analyst: Half of crypto’s top 10 assets “absolutely do not deserve” to be there

Simon Dedic, the co-founder of the crypto research house Blockfyre, has kicked a massive hornet’s nest — and it had the potential to upset a lot of people. In an inflammatory tweet, he said: “I will get some serious hate for that, but I stand by my opinion: $XRP, $BCH, $BSV, $LTC and $EOS absolutely do NOT deserve belonging to the TOP 10 cryptocurrencies.” He explained that the likes of Bitcoin Cash, Bitcoin SV and Litecoin are ultimately trying to be a “better Bitcoin” — and argues this simply isn’t necessary. He also criticized EOS and XRP for being centralized and called out Ripple for dumping billions of XRP tokens on a regular basis. Dedic believes the traceability platform VeChain as well as Tezos are far worthier of having a bigger market cap. 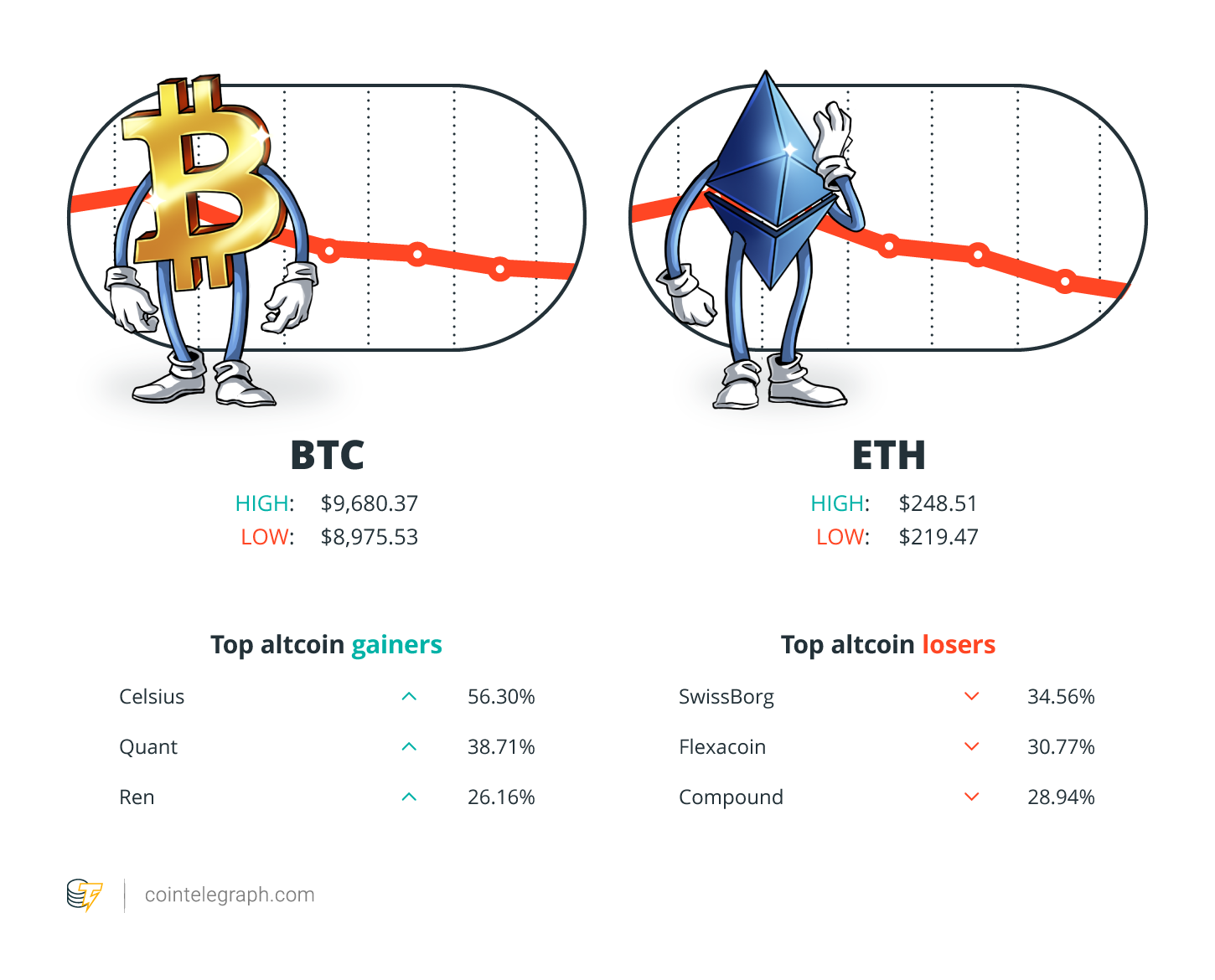 “If your Bitcoin bet pays off it will be cataclysmically destructive for the world. And that’ll have enormous consequences to many people we all know and care about who weren’t hedged in Bitcoin. And so you almost don’t want it to happen.”

“Grayscale *alone* has taken all BTC mined + 14,000 more BTC off the table since the halving.”

“The recent increase in correlation between Bitcoin and the S&P 500 could be the root of BTC’s current price volatility.” 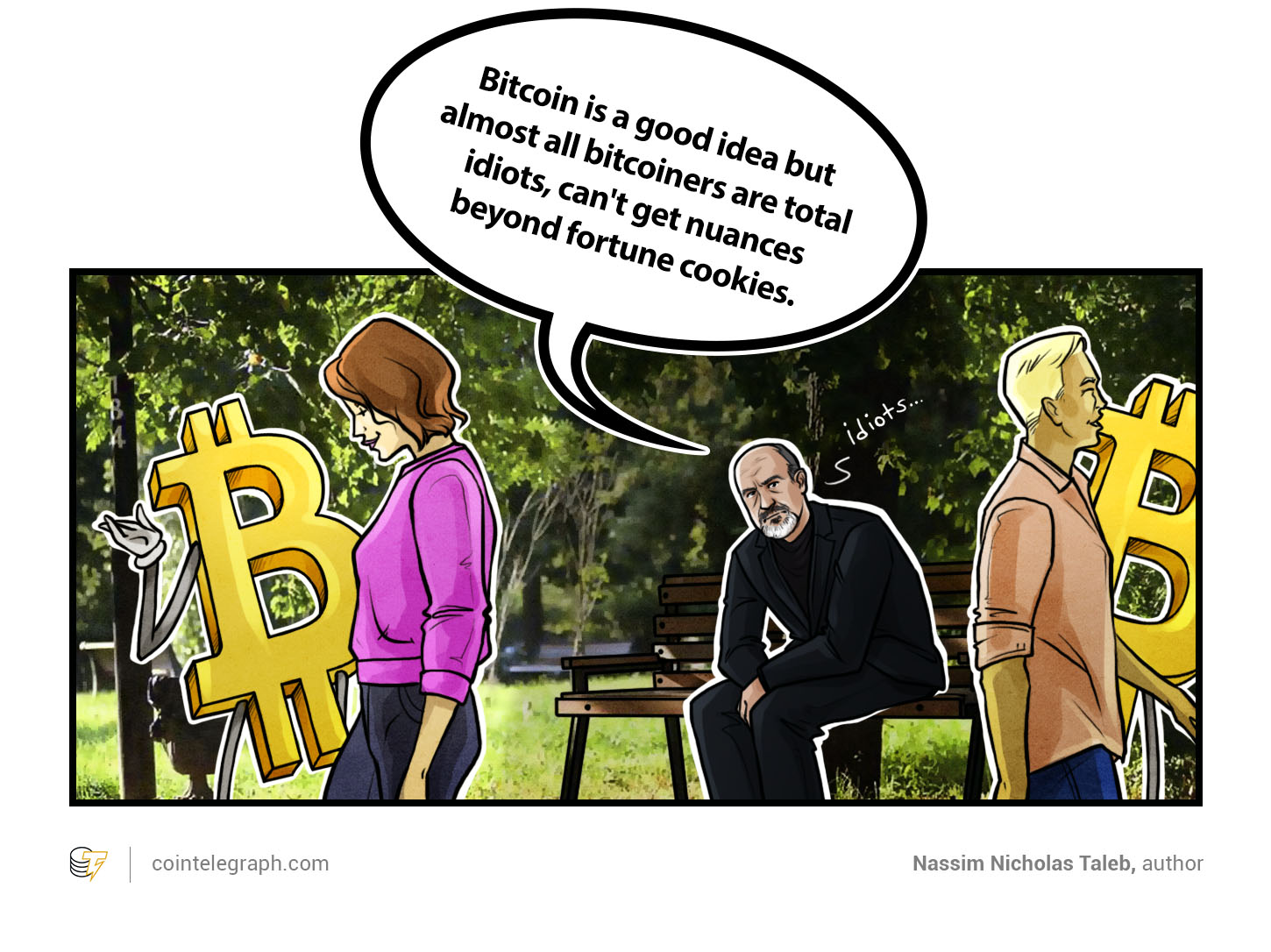 “Like I’ve been saying for months now, I have no reason to walk away from my prediction early in the year that Bitcoin is going to get stuck between $6,000 and $10,000 for the majority of this year.”

“I will get some serious hate for that, but I stand by my opinion: $XRP, $BCH, $BSV, $LTC and $EOS absolutely do NOT deserve belonging to the TOP 10 cryptocurrencies.”

“The Digital Resistance movement doesn’t end with last week’s ceasefire in Russia. It is just getting started – and going global.”

With Bitcoin 95% correlated to the S&P 500 right now, it isn’t ideal that one analyst has warned that this stock market index could soon suffer a 400-point crash. For Tone Vays, the economic uncertainty brought on by the coronavirus is proof that we won’t be seeing a BTC bull run for some time yet. On the latest episode of his Trading Bitcoin YouTube series, Vays said: “Like I’ve been saying for months now, I have no reason to walk away from my prediction early in the year that Bitcoin is going to get stuck between $6,000 and $10,000 for the majority of this year.” If he’s right, we might have to wait a little while before BTC attempts to reach all-time highs once again.

The Islamic State of Iraq and Syria is shunning Bitcoin. A news website affiliated with the jihadist group has updated its donations page to say it no longer accepts BTC — and that financial contributions should be made in Monero instead. Monero is a privacy coin that makes it easier to obfuscate the senders and receivers of transactions. There has long been speculation that ISIS has substantial war chests hidden in Bitcoin, but according to the blockchain intelligence firm Chainalysis, this doesn’t appear to be the case. Its research suggests that less than $10,000 was raised for terrorism through crypto.

A ransomware group says it is planning to auction over 1TB of data stolen from a major entertainment law firm. The REvil gang claims the contents show that some of the world’s best-known stars have been involved in sex scandals, drug use and treachery. Information about Nicki Minaj, LeBron James and Mariah Carey is apparently going to go under the hammer, with each dataset costing $600,000. Confidential files belonging to Universal and MTV are being sold for $1 million each. The gang left a warning for the law firm Grubman Shire Meiselas & Sacks, saying: “You have a chance to stop that, and you know what to do.” Emsisoft threat analyst Brett Callow told Cointelegraph that it’s difficult to know whether REvil has damaging documents on celebrities, warning they “could simply be making a bogus claim in the hope of upping the amount that people will bid.”

The astronomical price performance of the Compound Governance Token (known as COMP for short) may have been orchestrated using derivatives, according to analysts. After initially changing hands for approximately $80 each on June 18, COMP quickly rallied 500% to post highs above $380 on June 21. News of a Coinbase listing may have helped to entice buyers. But since that high, COMP has shed more than a third of its value, and it’s now trading under $250. The founder of the crypto asset manager Carbono, Raul Marcos, tweeted: “Trading $COMP futures right now is a masterclass on market manipulation.” 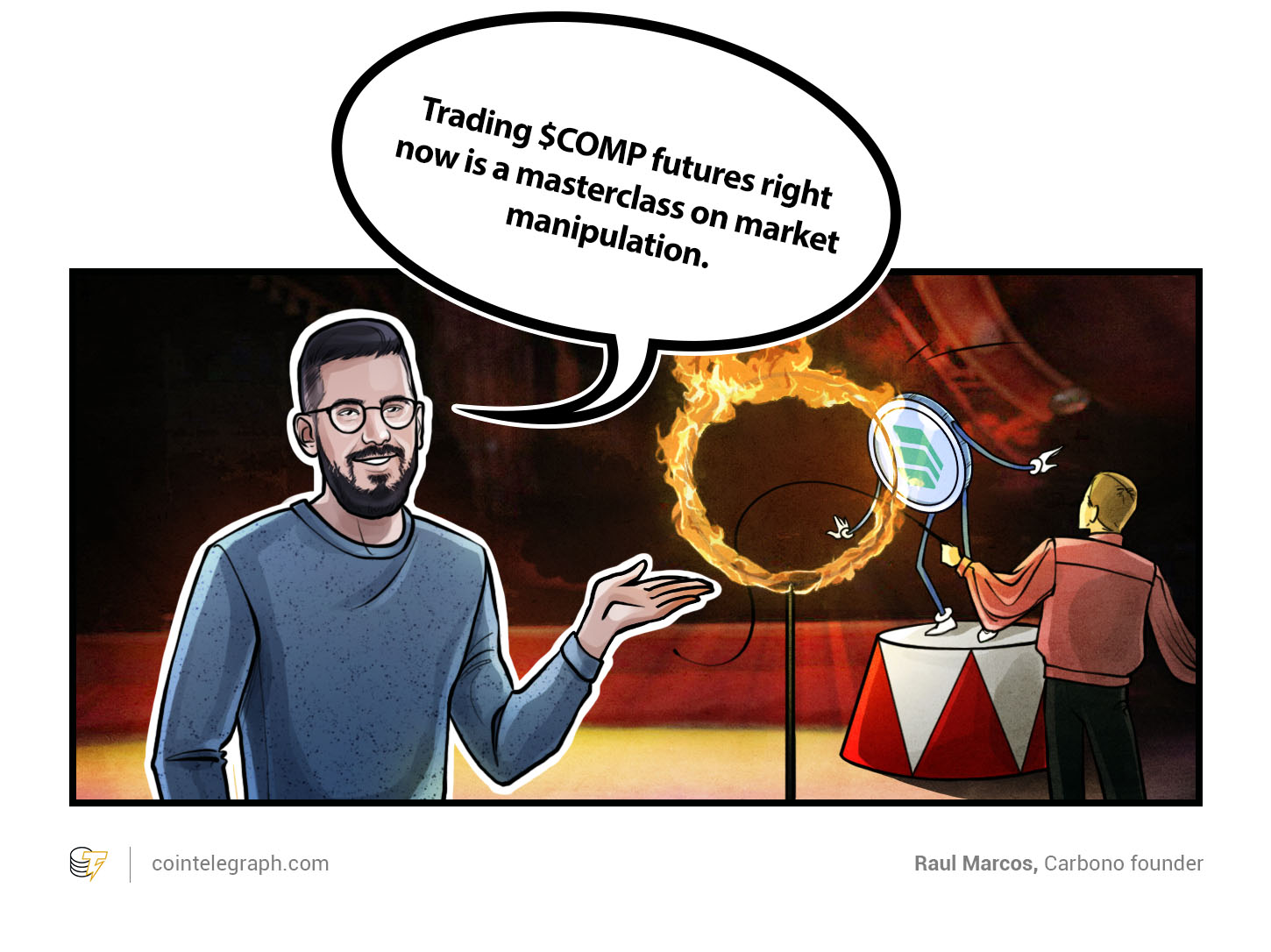 It’s NFT and gaming week at Cointelegraph Magazine. Find out more about this digital asset, test your knowledge, and discover how NFTs could result in a paradigm shift in video games.

As Shiraz Jagati explains, most believe that the British regulator’s latest efforts to monitor the U.K.’s crypto ecosystem are a step in the right direction.

How Bitcoin empowers the unbanked and combats injustice

After seeing an abject failure of traditional financial models, people might turn to decentralized peer-to-peer technology with crypto as the future.

Galaxy Digital to Buy BitGo for About $1.2B in Stock, Cash