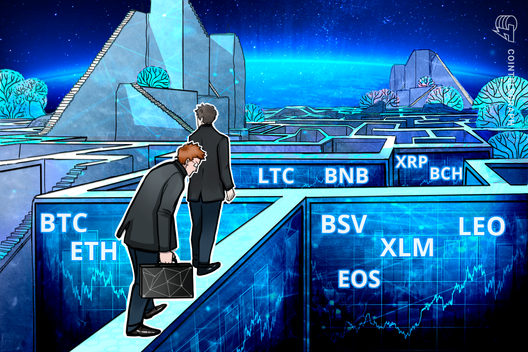 A few altcoins are looking strong. Is it a good time to buy or is this only a dead cat bounce? Let’s study the charts.

Apple CEO Tim Cook said that he is not comfortable with private companies creating their own cryptocurrencies. Therefore, he ruled out plans of Apple releasing its own currency token. Though Facebook has announced plans to launch the Libra stablecoin, it is facing a lot of regulatory hurdles. Due to this, a few early backers of the project are reportedly planning to drop out, prominent among them being PayPal.

The United States House Financial Services Committee has announced plans to question Facebook COO Sheryl Sandberg about Libra and the company’s advertising policies. After this, the committee wants Facebook CEO Mark Zuckerberg to testify by January of next year.

Federal Reserve Bank of Philadelphia President Patrick Harker believes that central banks will have to go the digital currency route in the future. He told a community banking conference that “it is better for us to start getting our hands around it.”

The crypto markets have stopped falling but they are yet to show a strong bounce. Will the major cryptocurrencies resume their down-move or is this a good time to buy before the turnaround happens?  Let’s analyze the charts.

Bitcoin (BTC) is trading inside a downsloping flag for the past few days.  Both moving averages are trending down and the RSI is in negative territory, which suggests that bears hold the edge. A breakdown of the flag will be a bearish sign that can attract further selling. If $7,337.78 cracks, the cryptocurrency will become hugely negative and can drop to $6,400. However, we give it a low probability of occurring.

This is an important level to watch because above this level, the BTC/USD pair can move up to the downtrend line of the triangle. Positional traders can wait for the price to sustain above $9,080 before initiating any long positions. On the other hand, aggressive traders can retain the stops on the long positions at $7,700.

Ether (ETH) has been struggling to climb above the moving averages, which shows a lack of buyers at higher levels. The bears will now try to sink the price back to the critical support of $163.755. If this support gives way, a retest of $151.829 will be in the cards.

Nonetheless, if the bulls push the price above the moving averages, a rally to $203.708 and above it to $235.70 is possible. Therefore, aggressive traders can retain the long position with the stop loss at $160.

We have not suggested a trade for the swing traders yet because both moving averages are sloping down gradually and the RSI is in the negative zone, which shows that bears have a marginal advantage. We will wait for the trend to change from down to up before proposing a trade in it.

XRP has been holding above $0.24508 for the past three days, which is a positive sign. This shows that bulls are buying the dips to this important support. Both moving averages are flattening out, which indicates a balance between both buyers and sellers.

However, if the bulls can scale above the 50-day SMA, a move to $0.34229 is possible. Therefore, traders can initiate long positions as suggested by us in the previous analysis. Contrary to our assumption, if the XRP/USD pair turns down from the 50-day SMA and breaks below $0.24508, a retest of $0.22 is likely.

Bitcoin Cash (BCH) remains stuck in a tight range of $203.36–$236.07. This shows that both the bulls and the bears are not certain of the next move, hence, are not taking large positions. Both moving averages are trending down and the RSI is close to the oversold zone, which shows that bears are in command.

A breakdown from the range will resume the downtrend and the next stop is likely to be $166.98. Conversely, if the bulls push the price above the range, a pullback to the neckline of the head and shoulders pattern is likely, which is an important resistance. If the BCH/USD pair scales above the neckline, it will signal that the down move might be over. We will wait for the pair to form a reliable buy setup before proposing a trade in it.

Litecoin (LTC) has been trading close to the upper end of the range for the past three days. This is a positive sign as it shows that bulls are not waiting for lower levels to buy. A breakout of $58.2512 can result in a move to the downtrend line, which is a stiff resistance.

On the other hand, if the bears defend the overhead resistance and sink the pair below the support of $50, the downtrend will continue.

EOS has been trading close to the overhead resistance of $3.1534 for the past three days. This shows that the sellers are losing their grip. However, until the price scales above the downtrend line, the risk of another leg down remains.

If the bears sink the price below the small uptrend line, a retest of the recent lows of $2.4001 will be in the cards. A drop below this level can drag the price to yearly lows.

The bulls could not propel Binance Coin (BNB) above the overhead resistance of $16.4882 in the past few days, which shows a lack of buying at higher levels. The price can now gradually dip to the bottom of the range at $14.2555.

If the bears sink the BNB/USD pair below the range, a drop to $12.0228 and below that to the support line of the channel is possible. With both moving averages sloping down and RSI in oversold territory, advantage is clearly with the bears.

Contrary to our assumption, if the bulls push the price above the overhead resistance of $16.4882 and the 20-day EMA, it will signal cherry-picking by long-term investors. However, a trend change will be signaled after the breakout of the resistance line of the channel. Until then, we suggest traders remain on the sidelines.

Bitcoin SV (BSV) continues to trade in a tight range. This shows uncertainty among both bulls and bears about the next directional move. Therefore, both are not taking large bets and are playing it safe. The traders waiting on the sidelines are also not jumping in because it is not clear which way the trend will turn.

Conversely, if the bulls can push the price above the 20-day EMA, a move to the 50-day SMA is possible. The BSV/USD pair has not risen above the 50-day SMA since July 11 of this year. Hence, a breakout will be a major event and will indicate a change in trend. We will wait for the buyers to assert their supremacy before proposing a trade in it.

The pullback in Stellar (XLM) stalled just below the 20-day EMA but it has not turned down sharply. It has been trading in a tight range for the past two days, which shows a balance between buyers and sellers. A breakout of the moving averages will be the first sign that the downtrend might be over.

If the price breaks out and closes (UTC time) above the 50-day SMA, a rally to $0.088708 is possible. The positive divergence on the RSI also indicates that a relief rally might be around the corner. Therefore, aggressive traders can initiate long positions as suggested in an earlier analysis.

The failure of the bulls to sustain the price above $1.0467 on Oct. 2 is a negative sign. It shows that buying dries up at higher levels. UNUS SED LEO (LEO) can now dip to the next support of $1.0075. The downsloping moving averages and the RSI in the negative territory shows that bears have the upper hand.

However, the pace of decline is gradual, which shows that selling pressure has reduced. Therefore, we anticipate a strong rebound from $1.0075, which can offer a buying opportunity to the aggressive traders. Conversely, if selling picks up momentum and bears sink the LEO/USD pair below the support of $1.0075, it can drop to $0.80. We will wait for a new buy setup to form before recommending a trade in it.

Newest Crypto - January 22, 2022
0
In a report published on Friday, Reuters laid out the findings of its investigation into the regulatory compliance practices of Binance, the world’s...

Why we need to be having this conversation