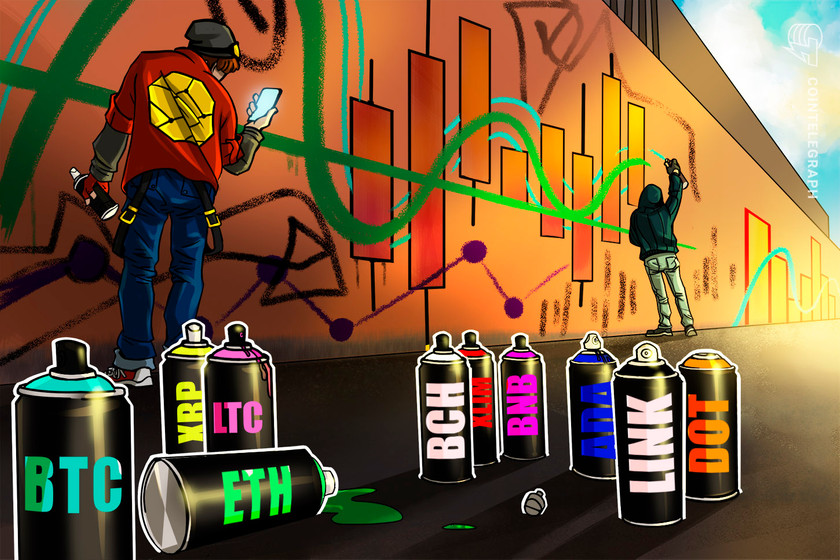 Even with today’s correction, Bitcoin is still in an uptrend, but most major altcoins have lost momentum and may remain range-bound for the next few days.

MicroStrategy CEO Michael Saylor recently tweeted that he purchased another 29,646 Bitcoin (BTC) at an average price of $29,646. With this purchase, the company has deployed the $650 million raised through a recent convertible debt offering. The business intelligence firm now holds 70,470 Bitcoin and that makes it the fifth-largest individual holder of Bitcoin.

The current Bitcoin bull run has largely been driven by institutional investors. Analysts at JPMorgan Chase believe that in order for the uptrend to continue, fresh institutional money needs to keep trickling in as it has done in the past few weeks, or Bitcoin could witness a correction.

Every bull phase witnesses several sharp corrections and Bitcoin’s current bull run is likely to be no exception. However, when the main trend is up, investors view dips as a buying opportunity as it allows a low-risk entry point. Therefore, if Bitcoin corrects, several new investors are likely to show interest until its uptrend remains intact.

One such hint can be seen from the conversation between Saylor and Tesla CEO Elon Musk. Saylor suggested Tesla convert its balance sheet from U.S. dollars to Bitcoin. Musk did not reject the idea but asked whether such a large transaction was possible.

As a response, Saylor said that he was willing to share his playbook with Musk so he could see how it is done. If a popular company such as Tesla adopts Bitcoin, it could lead to a rush from several other firms.

Let’s look at the charts of the top-10 cryptocurrencies to spot the critical levels on the upside and the downside.

Typically, momentum traders dump their positions when they find that the rally has stalled. That seems to have happened today, which pulled the price down to $21,934.83. However, the long tail on today’s candlestick shows that investors are aggressively buying on dips.

Today’s fall has eased the overbought levels on the relative strength index (RSI), which is a positive sign. This means the bulls are likely to try and resume the uptrend. If they succeed, a rally to $26,958 is possible.

However, if the price again turns down from the overhead resistance zone, the BTC/USD pair may remain range-bound for a few days. The pair remains in a strong uptrend as long as the price sustains above the critical $20,000 support.

A break and close below this support will be the first indication that demand is drying up at higher levels and that the sentiment may be shifting from buying on dips to selling on rallies. Below $20,000, the pair may drop to the 50-day simple moving average ($18,136).

Ether (ETH) could not pick up momentum after breaking above the ascending triangle pattern on Dec. 16. The failure to resume the uptrend could have attracted profit booking from short-term traders, which has pulled the price back below the breakout level at $622.807 today.

However, the bulls are currently attempting to defend the 20-day exponential moving average ($599). If they succeed, the ETH/USD pair will attempt to resume the uptrend. A break above $676.325 may bring the pattern target of $763.614 back into play.

The 20-day EMA is flattening out and the RSI is just above 54, which suggests that the up-move is losing momentum. If the bears defend the $660 to $676.325 resistance zone, the pair could enter a consolidation for a few days.

Contrary to this assumption, if the price slips below the 20-day EMA and the trendline of the ascending triangle, the advantage could shift in favor of the bears.

The price could now drop to the $0.435 support where buyers may step in. As the range is well defined with two touches on both the upside and the downside, traders are likely to buy near the support and sell near the resistance.

The flat 20-day EMA and the RSI just below the midpoint indicate the possibility of a few more days of range-bound action. The XRP/USD pair could start a trending move if the price rises above $0.6794 or slips below $0.435.

The uptrend in Litecoin (LTC) hit a wall at $124.1278 on Dec. 19 and the price is currently correcting the most recent leg of the up-move. The bulls are attempting to arrest the pullback at the 50% Fibonacci retracement level at $101.1868.

If they manage to do that, the LTC/USD pair may again rise to $124.1278. If the bulls can drive the price above this resistance, the pair may resume the uptrend and rally to the next target at $140.

The upsloping moving averages and the RSI in the positive zone suggest that the path of least resistance is to the upside.

Contrary to this assumption, if the bears sink the price below $101.1868, a drop to the 20-day EMA ($91) is possible. A break below this support will signal a possible change in trend.

The bulls are currently attempting to defend the 20-day EMA ($297). If the price rebounds off this support, the bulls will make one more attempt to push and sustain the BCH/USD pair above $353. If they succeed, the pair may start its journey to $500.

However, if the bears defend the $338 to $353 resistance zone, the pair could gradually drop to $240 and the pair may spend some more time inside a range before starting the next trending move.

Chainlink (LINK) formed a Doji candlestick pattern on three successive days from Dec. 17 to Dec. 19. This showed uncertainty and hesitation among traders to buy at higher levels even though the price had risen above the $13.28 resistance.

The failure to move up attracted selling and that dragged the price back below $13.28 on Dec. 20. The bears continued their selling today and the price has plunged below the moving averages.

If the bears can sink the price below the uptrend line and the $11.29 support, the LINK/USD pair could drop to $10. Contrary to this assumption if the price rebounds off the uptrend line, the bulls will again try to propel the price above $13.28.

The 20-day EMA has flattened out and the RSI has dropped to the midpoint, which indicates the bulls have lost their advantage. If the price sustains below the 20-day EMA, a drop to $0.13 is possible.

If the price rebounds off this support, the ADA/USD pair could remain range-bound for a few more days. The next trending move could start after the bulls push the price above $0.175 or if the bears sink the pair below $0.13.

Polkadot (DOT) is range-bound between $5.56 and $3.53. The bulls attempted to push the price above the range on Dec. 17 but failed. The price formed the Doji candlestick pattern on Dec. 18 and 19, which showed indecision among the bulls and the bears.

The uncertainty resolved to the downside on Dec. 20 and the DOT/USD pair has seen renewed selling today. The bears are currently attempting to sink the price below the 50-day SMA ($4.9).

If they manage to do that, the pair could drop to $4.50 and then to $3.80. The flat 20-day EMA ($5) and the RSI in the negative territory suggest that the advantage is shifting in favor of the bears.

This view will be invalidated if the price turns up and rises above the $5.6 to $6.00857 resistance. Such a move will signal the start of a possible uptrend.

The bears are currently attempting to sink the price below the breakout level at $32. If they succeed, the price may again enter a range-bound action.

However, if the price rebounds off the current levels, it will suggest that traders are buying at this level as they anticipate it to be the new floor. The bulls may make one more attempt to propel the price above $35.4338.

The flat 20-day EMA and the RSI close to the midpoint suggest a range-bound action for a few days.

If the price rebounds off $0.14, the bulls will try to push the price above the downtrend line. If they succeed, the XLM/USD pair may start its journey to $0.231655.

However, if the price turns down from the downtrend line, the pair may be at risk of forming a descending triangle pattern that will complete on a break below $0.14.